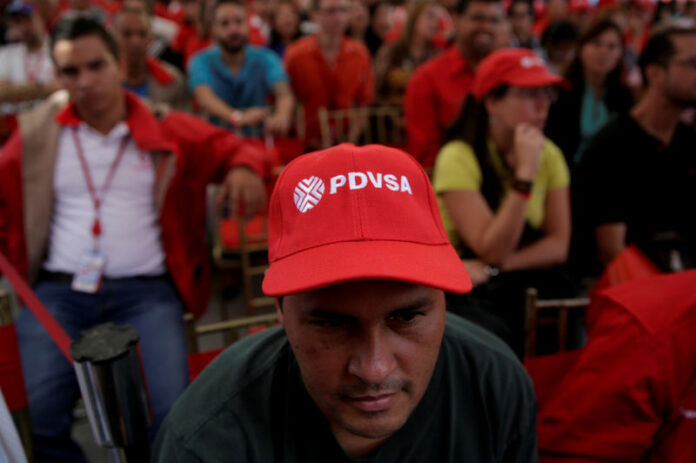 Under military rule, Venezuela oil workers quit in a stampede 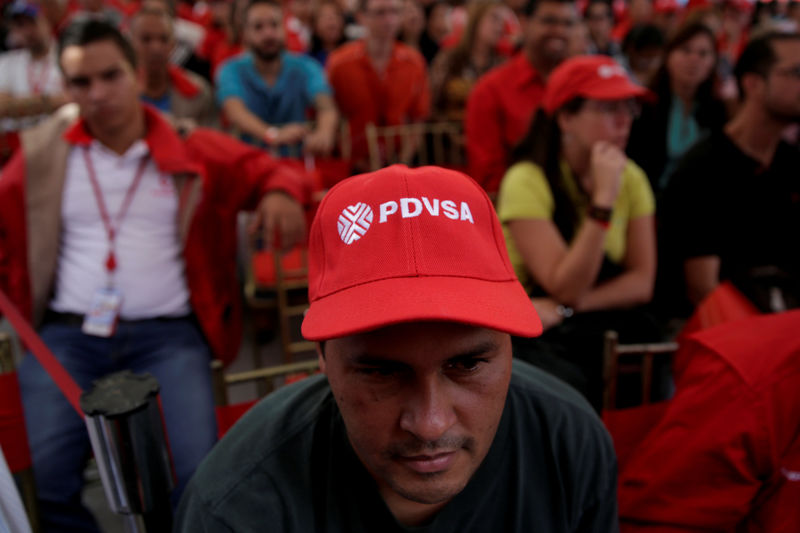 © Reuters. FILE PHOTO: A man wears a cap with the logo of PDVSA as he attends the swear-in ceremony of the new board of directors of Venezuelan state oil company PDVSA in Caracas

By Deisy Buitrago and Alexandra Ulmer

Flanked by other trucks carrying security guards, Quevedo passed a handful of workers waiting by an oil well cluster. They wanted a word with the OPEC nation’s oil minister and president of its state-run oil firm, PDVSA [PDVSA.UL], about the sorry state of the company.

Quevedo and his caravan drove on by.

“He didn’t get out to ask workers about what is going on,” said Jesus Tabata, a union leader who works on a rig in the oil-rich Orinoco Belt. “That way it’s easier to keep saying everything is fine – and at the same time keeping us on like slaves on miserable wages.”

What’s going on is that thousands of oil workers are fleeing the state-run oil firm under the watch of its new military commander, who has quickly alienated the firm’s embattled upper echelon and its rank-and-file, according to union leaders, a half-dozen current PDVSA workers, a dozen former PDVSA workers and a half-dozen executives at foreign companies operating in Venezuela.

Some PDVSA offices now have lines outside with dozens of workers waiting to quit. In at least one administrative office in Zulia state, human resources staff quit processing out the quitters, hanging a sign, “we do not accept resignations,” an oil worker there told Reuters.

Official workforce statistics have become a closely guarded secret, but a dozen sources told Reuters that many thousands of workers had quit so far this year – an acceleration of an already troubling outflow last year.

About 25,000 workers resigned between the start of January 2017 and the end of January 2018, said union leader and government critic Ivan Freites, citing internal company data. That figure comes out of a workforce last officially reported by PDVSA at 146,000 in 2016.

Resignations appear to have increased sharply this year, said Freites, a prominent union leader at Venezuela’s major refineries in the northern Paraguana peninsula.

Many of those leaving now are engineers, managers, or lawyers – high-level professionals that are almost impossible to replace amid Venezuela’s economic meltdown, the PDVSA workers and foreign executives told Reuters.

PDVSA and the Oil Ministry did not respond to repeated requests for comment. PDVSA board member and pro-government union representative Wills Rangel acknowledged the flight of talent is a serious problem.

“The massive resignations are worrying,” Rangel said in an interview. “In refinery operations, many have left.”

The pace of departures has quickened with the rapid deterioration of PDVSA’s operations and finances – radiating pain through the OPEC nation’s oil-based economy, now beset with food shortages and hyperinflation.

Quevedo – a little known former housing minister who replaced two executives jailed for alleged graft – has further poisoned the atmosphere, according to the two dozen sources who spoke with Reuters.

A stiff official who rose through the National Guard, Quevedo fired many long-term employees upon arrival and urged remaining ones to denounce any of their colleagues who oppose Maduro. He tapped soldiers for top roles, giving the oil firm the atmosphere of a “barrack,” two company sources said.

“The military guys arrive calling the engineers thieves and saboteurs,” said a Venezuelan oil executive at a private company who frequently works with PDVSA.

Quevedo is also fighting to retain control of a company increasingly riven by turf wars. The ruling socialists, once held together by late leader Hugo Chavez, have succumbed to infighting under Maduro, a former bus driver and union leader who lacks Chavez’ charisma and has seen his budget slashed with the decline in global oil prices.

Quevedo has clashed with Venezuela’s powerful Vice-President Tareck El-Aissami. When El-Aissami in February appointed a vice-president to the PDVSA unit that oversees joint ventures with foreign companies, Quevedo removed the appointee and had him arrested, according to three sources with knowledge of the incident, which has not been previously reported.

Quevedo is an ally of Socialist Party heavyweight Diosdado Cabello.

“There is a fight between Diosdado and Tareck for control of the industry,” said Hebert Garcia, a former army general who later broke with Maduro and fled the country.

The political turmoil and mass resignations threaten Maduro’s government, which depends on oil for 90 percent of export revenue.

In the Orinoco Belt, some drilling rigs are working only intermittently for lack of crews, said two sources there. In PDVSA’s refineries, several small fires have broken out because there are no longer enough supervisors, two sources in the northern Paraguana peninsula said. Lack of personnel in export terminals have forced some ports to cut back working hours, according to two shippers and one trader.

Oil production in the first quarter of this year slipped to a 33-year low of 1.6 million barrels per day.

‘WHEN ARE YOU LEAVING?’

Jobs at PDVSA were once coveted for their generous salaries and benefits, including cheap credit for housing. Now, many PDVSA workers can’t feed their families on wages that amount to a handful of U.S. dollars a month.

Some oil workers have resorted to working odd jobs on the side, taking vacation to work abroad, or even selling their work uniforms – red overalls – for money to eat.

Some workers in Lake Maracaibo, a production region near Colombia, can no longer get to their jobs, according to two sources there. Transport can cost up to 55,000 bolivars – equal to only 10 U.S. cents, but close to what some workers earn in a day.

“Now what we ask each other is: ‘When are you leaving and for where?’,” said one of the Maracaibo workers, who like thousands of other Venezuelans emigrated to Colombia this month. “Even in the bathroom, people are talking about quitting.”

At PDVSA headquarters, Quevedo often walks through the offices with a half dozen bodyguards who clear his path, according to one current and one former PDVSA employee.

The company’s ongoing decay is evident all around him in the once polished office tower: Broken elevators, poor cafeteria food, empty desks in once-crowded divisions.

Maduro has overseen the arrest of dozens of high-level PDVSA executives since late last year, sometimes at the Caracas headquarters as shocked employees looked on. Workers now feel watched by supervisors and are loathe to make any business decision out of fear they will later be accused of corruption, the sources said.

PDVSA workers, often visibly thinner, sometimes surreptitiously hand out resumes to executives from private companies, according to a source at a foreign firm.

Venezuela’s foreign oil partners, which include California-based Chevron, Russia’s Rosneft and China’s CNPC, are increasingly worried about PDVSA’s rapidly departing workforce, according to a half-dozen sources at multinational companies operating in Venezuela. But as minority partners, they have little or no sway over salaries and management.

The foreign partners have also grown increasingly frustrated with Quevedo, who initially asked for their suggestions on fixing the state-run firm but now appears ill-disposed toward reforms, the sources said.

At least one foreign company is considering bringing in foreign specialists to improve its operations, one of the sources added. But with crime, power cuts and shortages rampant in Venezuela, luring foreign professionals is tough.

Still, in the Orinoco belt, some vow to stay in the belief that Maduro’s government can’t last.

“We can’t give up,” said Tabata, the union leader who watched Quevedo’s truck drive by that day. “This government is unstable and could fall at any moment – and who will be left?”