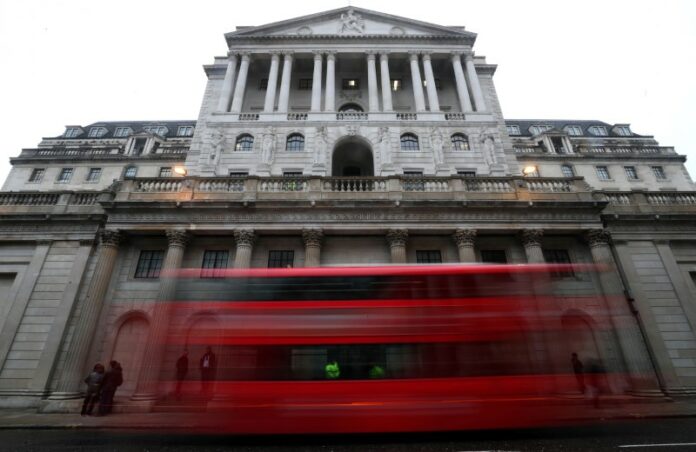 Bank of England to raise rates in May, almost all economists say: Reuters poll 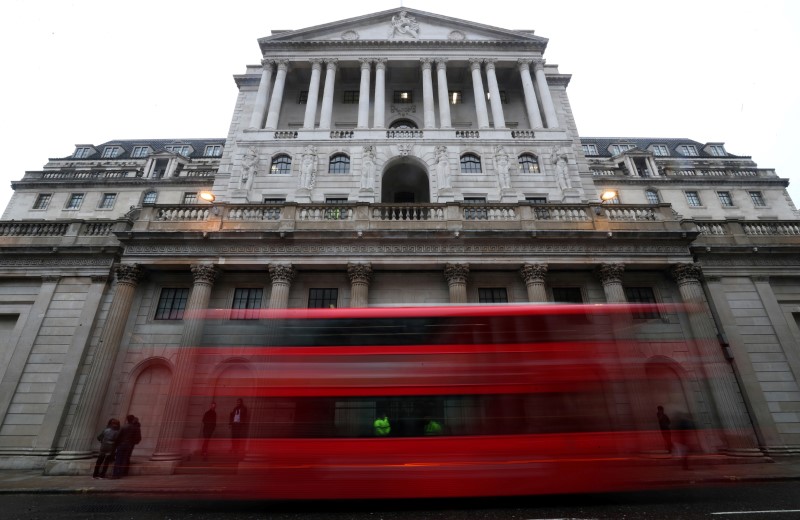 © Reuters. FILE PHOTO: A bus passes the Bank of England in London

LONDON (Reuters) – The Bank of England will raise its key interest rate to 0.75 percent in May, nearly all the 76 economists polled by Reuters said, then add another 25 basis points just before Britain is due to leave the European Union early next year.

Soon after the June 2016 vote to split from the EU, the Bank cut 25 basis points from borrowing costs, taking them to a record low of 0.25 percent. It reversed this move in November, a decision most economists said at the time was a policy error.

Following hawkish signals from policymakers and relatively upbeat data, all but seven of the 76 economists polled April 10-17 said Bank Rate would go up from 0.5 percent on May 10 when the Bank is also due to publish its quarterly Inflation Report.

A majority of economists, 37 of 62, said the BoE will have lifted Bank Rate to 1.0 percent or higher by the end of the first quarter next year. The median forecast shows the rate at a still historically low 1.25 percent in the final months of 2019.

Growth has continued since the referendum, and while Britain has fallen from the top to the bottom of the fastest-growing economies among its peers, the poll forecast only a median 10 percent chance of a recession this year.

Unemployment fell to its lowest since 1975 in the three months to February, official data showed on Tuesday, although wage growth in the period was not as strong as expected.

But the BoE has said falling unemployment should start to push up pay more quickly, the main reason it gave for being likely to raise interest rates faster than it had previously thought.

“February’s labor market figures provide us with optimism that sustained rises in real wages are now in prospect and should seal the deal on another interest rate hike in May,” said Ruth Gregory at Capital Economics.

Progress has been made on a transition period after Britain is due to leave the EU by the end of March 2019, where much of its relationship will remain the same. But a lot remains to be discussed about future trading arrangements.

Economists gave a relatively low 20 percent chance of a disorderly Brexit, in which no deal is agreed by the end of March 2019. That probability has been the same all year.

“Following the agreement on the transitional arrangements reached at the March EU Summit, we view the risk of a ‘disorderly’ Brexit as having lessened further,” said Victoria Clarke at Investec.

In the aftermath of the EU referendum vote to leave, sterling

But the pound soared to its highest level since then on Tuesday, reflecting weakness in the U.S. dollar, but also because of seasonal dividend payments to British shareholders from foreign companies.

Growth forecasts were also unchanged, with expectations for 1.5 percent in 2018 and 2019, little different from IMF forecasts published on Tuesday. After a sluggish 0.3 percent growth expected in the first quarter of the year, medians showed 0.4 percent through the end of next year.

Euro zone growth was predicted at 0.4 to 0.6 percent per quarter over the same period, but economists in a sister poll cautioned growth would take a further hit from the trade disputes between the United States and China.

Over 90 percent of 31 respondents said the dispute would also damage UK growth, including two who expected the impact to be significant, but many said Brexit negotiations would hold more sway. Only two said Britain would benefit.

“Really very much contingent on what is actually implemented in the U.S./China dispute … Brexit-related trade issues are far more material in impact terms to the UK economic outlook,” said Marc Ostwald at ADM ISI.