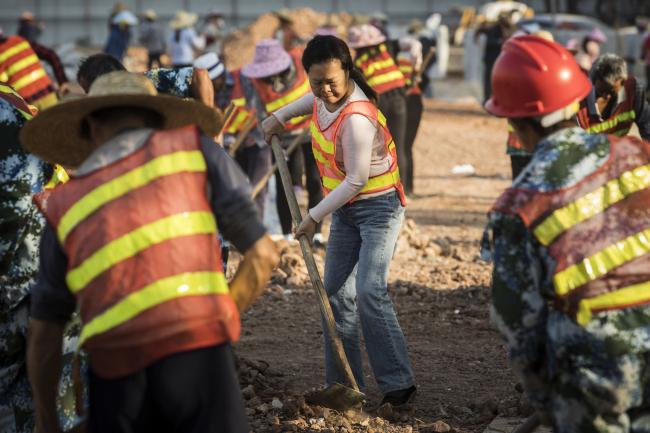 © Bloomberg. Workers labor while landscaping in front of the residential and commercial buildings, unseen, in Guangzhou, China, on Wednesday, Nov. 1, 2017. China is poised for an acceleration of deals as confidence grows in the wake of last month’s Communist Party gathering and as the nation opens up to reforms. Photographer: Qilai Shen/Bloomberg

(Bloomberg) — Chinese developers may have had a stellar 2017 compared with recent years but bond investors are increasingly concerned their windfall won’t be enough to withstand the tighter funding conditions this year that could lead to cash crunches.

Last year saw a broad based improvement in finances for China’s property sector, helped by fast-rising property prices. Profit margins rose for the first time in at least five years, while leverage fell to the lowest since 2011, and interest cover rose to a six-year high.

Yet for fixed income fund managers, rising interest rates and a regulatory squeeze on local funding for the highly indebted sector, is the number the one worry. Some in the market say developers may even be headed for rare defaults.

“2018 will reflect the difficulty with the higher funding costs,” said Ivy Thung, Singapore-based head of credit research at Nikko Asset Management. “The ability to service debt comes into question if Chinese developers are unable to get financing, or are doing so at much higher interest costs.”

The People’s Bank of China said late yesterday it will cut the reserve-requirement ratio for some banks to reduce their funding costs. While the move should shift the banks to a cheaper and more stable source of funding, – which should ultimately pass through to lower cost of funds for corporate borrowers, it represents an optimization in liquidity management, not an easing of policy, Bloomberg economists Tom Orlik and Fielding Chen wrote in a note.

These three charts show how while creditworthiness has improved for Chinese developers, risk factors remain that investors should be watching out for:

The median gross profit margin for China’s listed developers jumped to just under 27 percent in 2017, the highest in three years, according to Bloomberg compiled data. Margins should at least remain stable this year, if not improve, because average selling prices have been good in the past two years, according to Clement Chong, a Singapore-based senior credit analyst at NN Investment Partners Ltd. The worry is what will happen two to three years down the road.

“At least in the next three years, builders can be pretty assured of their margins based on the land cost they paid and projected selling prices,” said Chong. “Beyond that, it will depend on how much land they buy and at what cost.”

2. Debt ratios are down

Median leverage for the listed developers, as measured by the net debt to EBITDA ratio, continued to fall in 2017 to 2.9 times, the lowest since 2011. The improvement in builders’ debt profile was mostly driven by stronger profits after selling projects in the red-hot market of the previous two years, according to Christopher Yip, a real estate analyst at S&P Global Ratings. However, he doesn’t see the deleveraging trend lasting long.

“The improved credit profiles may only linger for a while until 2019, as developers inevitably start selling more expensive land parcels with thinner margins,” Yip said. “A desire to gain a stronger market share in an industry consolidation wave will also push them to keep scouting for more financing and pile up more debts.”

China’s listed developers saw a significant jump in their ability to repay debt, with the median operating profit to interest expense ratio rising to 3.4 times in 2017, almost double that in 2016, Bloomberg-compiled data show. Yet the rosy picture may not last long now that borrowing costs are on the rise for the sector.

Besides these risks to profitability and leverage, supply in the debt market is a further complicating factor, with a full pipeline of issuers primed to tap the market.

“My main concern is tight funding conditions for developers,” said NN Investment’s Chong. “Compounding that is the large supply pipeline, and a possible decline in demand for high-yield dollar bonds.”