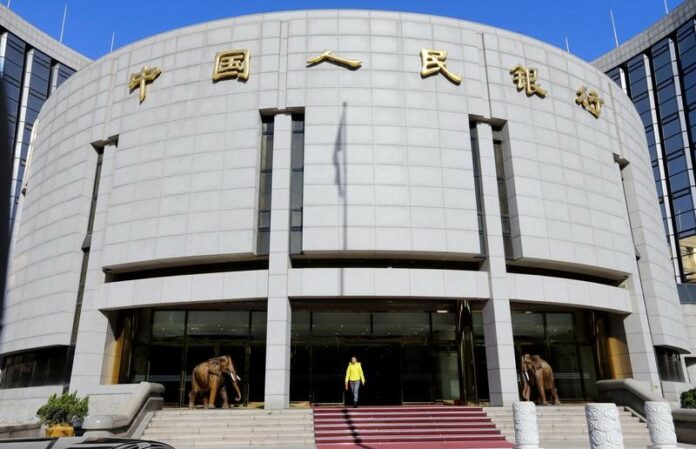 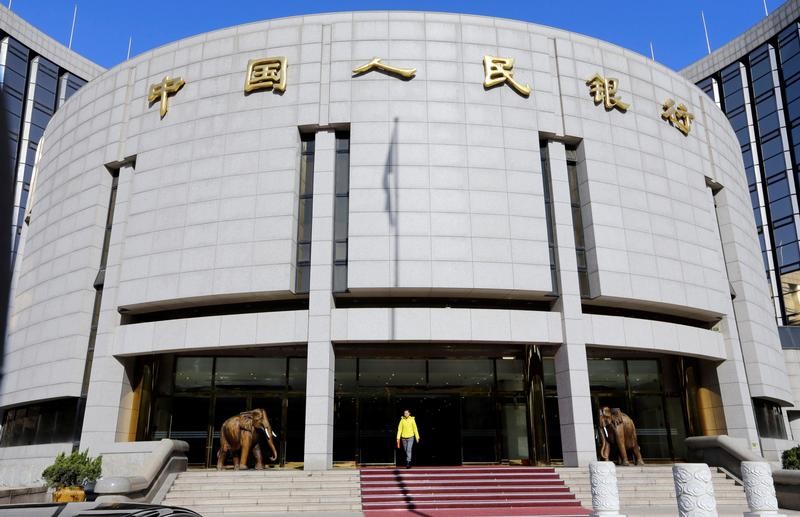 © Reuters. FILE PHOTO: A woman walks out of the headquarters of PBOC in Beijing

BEIJING (Reuters) – The unexpected decision by China’s central bank to cut the amount of cash that lenders must keep in reserves is unlikely to be its last such move given the growing concerns about a possible trade war with the United States, economists said.

The reduction in reserve requirement ratios (RRR), announced by the People’s Bank of China late on Tuesday, may indicate that Beijing is worried that the Chinese economy showed signs of cooling in March and could lose further steam in coming months.

“The policy intention is clear. They want to release some liquidity or loosen a bit as the economy faces downward pressure, and the external picture looks grim,” said Wang Jun, Beijing-based chief economist at Zhongyuan Bank. “There is room for more RRR cuts as they seek to gradually replace short-term policy tools.”

Most investors were caught off-guard by the central bank’s move as it came just a few hours after China reported faster-than-expected economic growth for the first quarter. The March weakness was more than offset by strength in the first two months of the year in the world’s second-largest economy.

U.S. President Donald Trump has threatened to impose tariffs on $150 billion in Chinese imports to the United States to punish China for what U.S. government officials regard as its predatory industrial policies and abuse of U.S. intellectual property. Beijing has vowed to retaliate.

A full-scale trade war between the world’s two economic superpowers would hurt both Chinese and U.S. exports and have a negative impact on growth in the two countries, as well as probably lead to collateral damage for other countries.

At the same time, China has been deleveraging parts of its financial sector amid concerns that unfettered borrowing and lending – particularly through wealth management firms in the shadow banking world – could destabilize the economy.

The recent appreciation of the yuan

The PBOC said that its move to cut reserve requirements should allow the banks to use the cash to repay relatively costly loans and boost lending for small firms.

The PBOC reiterated that its “prudent and neutral” policy stance remains unchanged, saying that 900 billion yuan ($143.2 billion) out of 1.3 trillion yuan released via the RRR cut will be used to repay the maturing medium-term lending facility.

“The early timing of this RRR cut shows that the PBOC is well aware of the impact of the financial deleveraging policy as well as how to mitigate the impact,” Wei Yao, China economist at Societe Generale (PA:), said in a note to clients.

“At the same time, it finds creative ways to limit the scope of easing, so as to avoid sending the wrong message about Beijing’s attitude towards financial regulations.”

Analysts at UBS estimated that the replacement of maturing MLF facilities with 900 billion yuan released via the RRR cut could reduce banks’ funding costs by around 29 billion yuan, which may encourage banks to lower lending rates.

The central bank said that the remaining 400 billion yuan released by the RRR cut will help smaller banks, which have limited access to the medium-term lending facility, to lend more to small firms.

“The cut reinforced the consensus that China is unlikely to tighten further,” said Tommy Xie, China economist at OCBC Bank in Singapore, said in a note. “The RRR cut will also play a pre-emptive role in stabilizing China’s credit expansion to ease the tighter monetary conditions. More cuts with similar features may come.”

In recent years, the central bank has been relying more on the use of short-term liquidity instruments, such as the MLF, and the standing lending facility (SLF), but it faces more difficulties in rolling over such policy tools, analysts said.

The outstanding amount of MLFs is 4.9 trillion yuan, with about 420 billion yuan maturing each month, according to investment bank CICC.

“If the PBOC does not act, either extending these facilities or offering more RRR cuts, monetary conditions will automatically turn tighter going forward. Hence, there is a genuine need for easing,” Kevin Lai, senior economist at Daiwa Capital markets in Hong Kong, said in a note.

“We still do not think the PBOC will cut interest rates, unless there is a sharp macro deterioration, either because of a rapid GDP slowdown or a full-blown trade war that may involve aggressive use of monetary tools,” Lai added.

In the markets, CICC estimated the reserves requirement cut will reduce money market interest rates by more than 20 basis points and reduce bond yields by 10 basis points or more.