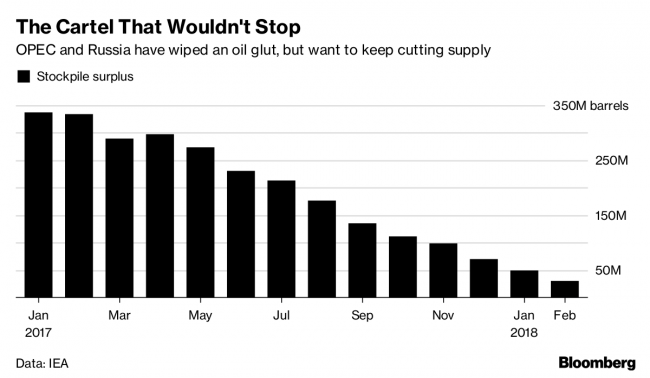 (Bloomberg) — OPEC and Russia will meet in Saudi Arabia this week after all but banishing a global oil glut. While looming political crises threaten to tighten supplies further, the group seems determined to keep its cuts in place.

Almost 16 months of output curbs by the Organization of Petroleum Exporting Countries and its partners have seen crude rally to a three-year high near $70 a barrel. That’s replenishing their coffers after the worst oil slump in a generation, encouraging the producers to extend their intervention even as Venezuela’s petro-economy implodes and Donald Trump threatens Iran with sanctions.

“Would they declare victory now and stop? No way,” said Mike Wittner, head of oil market research at Societe Generale (PA:) SA. “They’re happy to see inventories continue to go down, to see prices of $70 or $80. In the end, it’s about revenues. The question is at what point do they become uncomfortable with higher prices?”

While analysts warn that price gains could backfire on OPEC by spurring rival U.S. supplies or crimping demand, ministers gathering in Jeddah on April 20 will focus on ways of prolonging their cooperation. That could include new inventory targets that extend the cuts, and laying the foundations for an alliance that will last for years. Any recommendations this week would have to be ratified at the group’s full meeting in June.

OPEC and Russia, for decades competitors in the oil market, forged an alliance in late 2016 to combat the surplus unleashed by a boom in American shale production. Though it’s taken longer than expected, the strategy is paying off. With inventories subsiding to normal levels, the International Energy Agency says OPEC and its partners can declare “Mission Accomplished.”

Saudi Arabia, OPEC’s biggest member, says the curbs should continue at least until their scheduled expiry at the end of the year, and possibly into 2019. Energy Minister Khalid Al-Falih contends this is necessary to ensure markets have properly rebalanced, and that prices are high enough to encourage the global oil industry invests in future supplies.

There are other incentives for sticking with the strategy: the IEA estimates that in the first quarter, OPEC nations earned almost $400 million a day more than a year ago because of stronger oil prices. Russia’s budget gained about 1.2 trillion rubles ($19.5 billion) last year, according to its Energy Ministry.

“They are willingly over-tightening this market,” said Jan Stuart, an oil economist at consultant Cornerstone Macro LLC in New York. “It’s not self-defeating if what you are looking for is a little extra money. If the idea is to get a ton of money in the door now, then they’re probably doing the right thing.”

Saudi Arabia is said to seek a price increase to $80 a barrel, according to people familiar with the matter, to cover weighty domestic spending needs and attract investors to a partial sale of its state oil company, Saudi Aramco.

The accord also serves political objectives for Russia, cementing President Vladimir Putin’s role as a power-broker in the Middle East, where his government maintains ties with the antagonistic regimes in Saudi Arabia and Iran, and supports Syria’s President Bashar Al-Assad against a rebellion backed by western powers.

“Politics plays its role of course,” said Andrey Polischuk, an energy analyst at Raiffeisen Centrobank in Moscow. “Russia needs to maintain good relations with its Mideast allies, and now even more than last year.”

Regardless of the benefits, continuing to restrain output may be an odd policy for OPEC when accidental supply losses inside the cartel are mounting and other threats of disruption loom.

The group’s output reduction is now 60 percent bigger than the planned cut of 1.2 million barrels a day as Venezuela’s deepening recession hits its oil infrastructure. Meanwhile, President Trump has vowed to abandon an agreement with Iran on the country’s nuclear activity, and potentially reimpose sanctions on the nation’s oil trade.

If the Latin American country continues to deteriorate and Trump delivers on his Iranian threats, OPEC’s unplanned losses could effectively double the impact of its intended production cut.

Rather than filling the gap, though, the producers are maintaining strict discipline.

As oil inventories get closer to the five-year average level — OPEC’s stated goal — Saudi Arabia has said a new target is necessary to filter out the distortion of excessively high stockpiles seen in recent years. The group is considering alternative gauges, such as using a seven-year average.

“All of the various suggestions that have been floated would give OPEC a rationale to continue cutting,” said Societe Generale’s Wittner.

In Jeddah, the producers will also work on turning the temporary alliance of the past year into a long-term partnership. Russia’s Novak said he’d like cooperation to last “indefinitely.”

“The current production targets are not forever, but a more structured framework than we’ve ever seen before is something they’re working on quite seriously,” said Wittner. “The agreement is never going to end.”