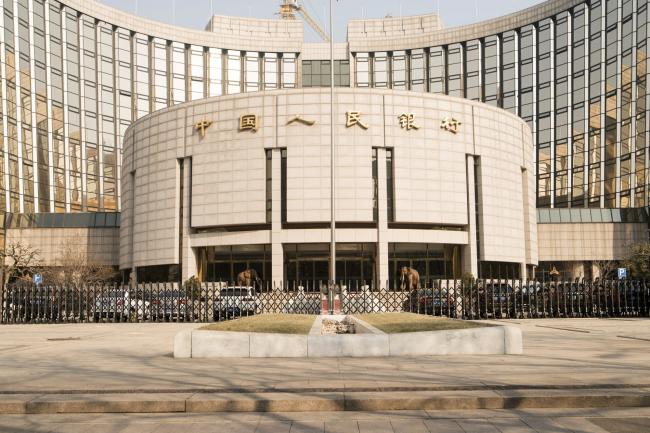 © Bloomberg. The People’s Bank of China headquarters stand in Beijing, China, on Monday, Feb. 26, 2018. China’s Communist Party is set to repeal presidential term limits in a move that would allow Xi Jinping to rule beyond 2023, completing the country’s departure from a political system based on collective leadership.

(Bloomberg) — The People’s Bank of China said it will cut the reserve-requirement ratio for some banks to reduce their funding costs and in turn help ease conditions for businesses and individuals.

The 1 percentage point reduction takes effect April 25, the central bank said late Tuesday. About 900 billion yuan ($143 billion) of outstanding medium-term lending facility loans will be repaid on the day of the cut and another 400 billion yuan will be unleashed, it said in a statement.

Amid a multi-year effort to cut financial risk and curb credit growth, the PBOC has been fine-tuning liquidity conditions and guiding market rates higher without raising broader borrowing costs. Even as the economy is forecast to slow this year, policy makers have given little sign they’re ready to depart from their “prudent and neutral” stance.

“It is not a liquidity-easing policy,” analysts including Larry Hu, head of China economics at Macquarie Securities Ltd. in Hong Kong wrote in a note. “It is not very likely for the PBOC to ease at this moment, given the economy still grew 6.8 percent year-on-year in the first quarter. The priority for China’s policy makers should remain as the deleveraging push.”

The central bank announced a similar reduction in September. Effective in January, it applied to all major banks, 90 percent of city commercial banks, and 95 percent of rural commercial lenders and ranged from 0.5 percentage point to 1.5 percentage point depending on how much business banks do with small firms, agricultural borrowers and new companies.

While Tuesday’s announcement addresses the same issue, this cut also helps improve the funding structure for banks as the money will be used to repay MLF borrowing. That eases banks’ burden of paying MLF interest to the PBOC, in effect increasing their ability to lend to individuals and companies. In turn, that reduces the demand for shadow banking credit to the economy.

The central bank reiterated that it will keep the current broad policy settings and maintain “reasonable and stable” liquidity.

China’s small and micro enterprises find it hard to gain funding and financing costs are high, the PBOC said in a Q&A statement. The capital unleashed from the RRR reduction could offset some PBOC funds injection via MLF, so the cash supply in the banking system will be more stable.

The central bank will require related financial institutions to use most of the additional funding to extend loans to small and micro companies, and to reduce the financing costs and improve financial services to such firms.

The PBOC started to offer the MLF loans, ranging from three months to a year, as a traditional source of funding, outstanding funds for foreign exchange, fell amid a narrower trade surplus. Outstanding MLF loans surged to a record 4.9 trillion yuan in March.

The RRR currently stands at 17 percent for large commercial lenders, a level explained by the need to keep China’s persistent current account surpluses from dousing the domestic economy in liquidity.

“This move is a clear effort from the PBOC to mitigate the pain of financial deleveraging,” said Yao Wei, chief China economist at Societe Generale (PA:) SA in Paris. “As shadow credit growth is falling quickly now, banks need all the help they can get to sustain formal bank lending.”