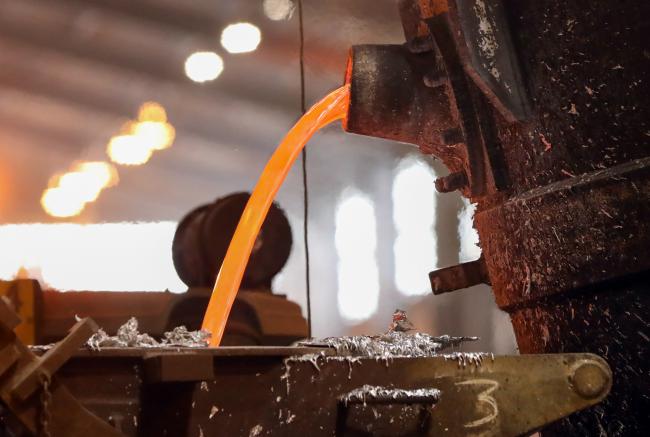 © Bloomberg. Liquid aluminum is poured into a transportation vessel.

Electricity is an essential component in the production of aluminum. The suspension deprives one of Deripaska’s biggest assets in Europe from its bargain rights for power purchases. Instead it will have to depend on direct deliveries from the volatile short-term balancing market or a non-negotiable standard deal from German utility EON SE, its local grid company.

Both options would be more expensive than a commercial deal, said Christian Holtz, an energy analyst at Sweco AB in Stockholm, which advises major power users.

Kubikenborg Aluminum, about 235 miles north of Stockholm, was on Wednesday thrown out from Nord Pool AS’s Oslo market due to “failure to comply” with clearing rules. Neither Nord Pool or Kubal’s direct supplier Kinect Energy AS would provide more details. Kubal chief executive officer Javier Navia said Wednesday it was an indirect consequence of U.S. sanctions against the Rusal and he was working with banks to resolve the issue.

The Kubal plant is one of the Sweden’s biggest power consumers, using as much electricity as 400,000 households consume every year. To buy that amount of power at the average rate on Nord Pool last year would have cost about 59 million euros ($73 million).

Swedish law states that grid companies are obliged to step in to secure deliveries when a supplier halt flows. EON owns the local grid Kubal is connected to.

“It is the grid company’s responsibility to direct the customer to a new designated supplier, in this case to our sales company,” Johan Aspegren, a spokesman for EON’s Swedish unit. It was not clear if the sanctions would also apply to the new supplier and the company’s lawyers are investigating, he said.