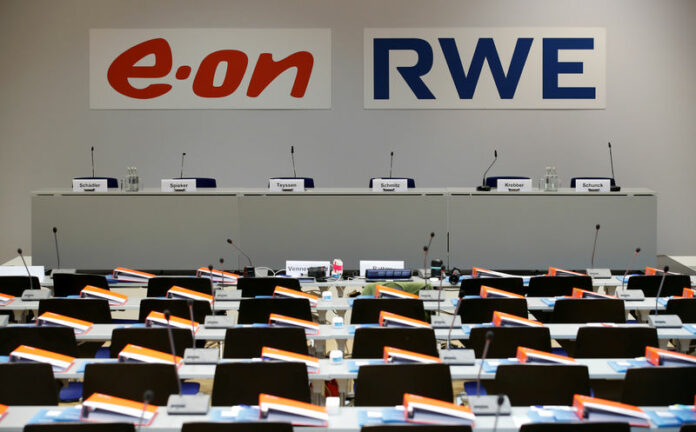 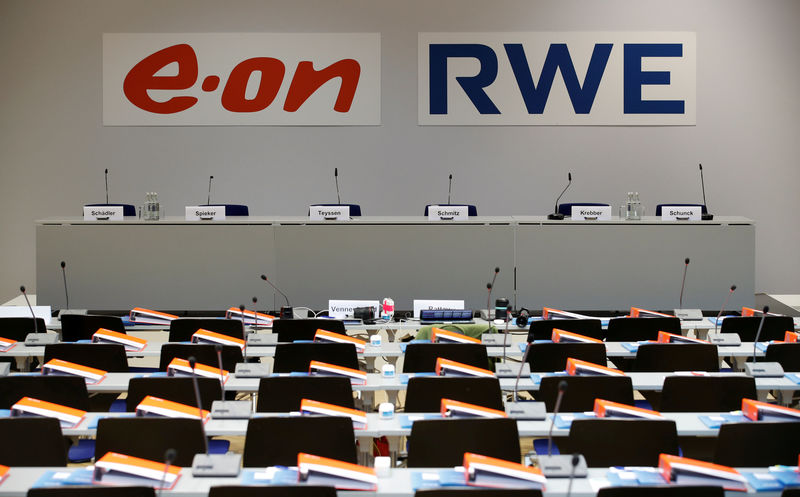 © Reuters. FILE PHOTO: The logos of RWE and E.ON are seen before a joint news conference of the two German utilities after unveiling plans for an asset swap deal which will break up RWE’s Innogy unit in Essen

Hungary was one of the first European countries to turn against foreign ownership of utilities back in 2013 but there are growing signs that borders are springing up again in an industry that has struggled to make international deals pay off.

Several European utilities were lining up to buy German utility RWE’s (DE:) subsidiary Innogy (DE:) but in March RWE and domestic rival E.ON (DE:) agreed to carve up the renewable energy firm themselves in an all-German deal.

“In a business as sovereign and strategic as utilities, it is hard to see major deals materializing in today’s Europe,” said a banker in Paris who has worked on cross-border mergers and acquisitions (M&A) in the utilities sector.

Bankers say the German deal, hammered out within two months, was partly aimed at keeping Innogy’s prized assets out of foreign hands and the backlash against foreign owners is now fuelling speculation some big cross-border deals may be unwound.

EDF’s Italian energy subsidiary Edison (MI:), the third-biggest power producer in Italy, is seen as a prime example of a legacy cross-border investment ripe for unwinding.

Edison’s oil and gas activities no longer fit EDF’s low-carbon strategy and its prospects of winning retail market share from Enel (MI:), in which the Italian state has a 24 percent stake, look limited.

“The Italians have never accepted that Edison is no longer Italian,” said the Paris banker, adding that the firm’s growth outlook in Italy would always be constrained by its French ownership.

Sources told Reuters this month that Edison had selected banks to sell its oil and gas exploration and production division – joining other utility firms that have sold off hydrocarbon assets as they grapple with sluggish energy demand, low wholesale prices and a surge in cleaner, renewable energy.

Spain’s Endesa (MC:) is another asset owned by a foreign utility seen as a potential candidate for resale. Italy’s Enel, Europe’s biggest utility, outbid E.ON for Endesa in 2007 during a spate of cross-border European utility mergers.

While Enel, which owns 70.1 percent of Endesa, has denied it has plans to sell, its control has drawn criticism from Spanish politicians who say Endesa is not investing enough locally and pays too much in dividends to its owners.

Enel Chief Executive Francesco Starace acknowledged nationalism was having an impact on utilities M&A in Europe.

“There is some but I don’t think Europe’s big countries can afford to be nationalistic because they would need really deep pockets to keep these companies off their markets,” he told Reuters.

The spate of cross-border utility takeovers before and just after the 2008 financial crisis came as 10 countries joined the European Union in its biggest enlargement and European power companies saw a chance to become regional power giants.

But the collapse in wholesale power prices since has undermined many of these debt-fueled deals. Engie, E.ON and Vattenfall alone have written a combined 34 billion euros at least off the value of their international acquisitions.

Now, not much of the cross-border deal euphoria is left.

With nationalists in power in Hungary, Poland and Austria, and right-wing parties on the rise in other large European countries, utilities are feeling a backlash against the internationalization they embraced a decade earlier.

“This is still a very national business,” said a senior banker who worked on the Innogy deal. “The most difficult situations in a big transaction are those that involve players from different countries.”

While potential foreign ownership had not become a political issue ahead of the Innogy deal, German politicians publicly opposed attempts by China State Grid Corp [STGRD.UL] to buy a stake in German grid operator 50Hertz from Australian fund IFM.

A source familiar with the situation told Reuters that German officials had encouraged Belgium’s Elia (BR:) – the leading shareholding in 50Hertz – to increase its stake rather than let State Grid buy it.

The first moves against international ownership of utilities came in Hungary, where right-wing populist Prime Minister Viktor Orban said in 2013 the state would seek to buy back Hungarian assets of E.ON, RWE, EDF, Engie and Italy’s Eni (MI:).

Since then, Orban has imposed sharp cuts in energy prices, making mostly foreign-owned firms foot the bill, and several foreign utilities have sold their operations to the state.

In Poland, EDF and Engie felt the sting of nationalist energy policies in 2016 when the ruling Law and Justice party put assets owned by French utilities on a list of firms deemed important for energy security, to block their potential sale.

EDF, which had been in talks with Czech firm EPH and IFM about selling its assets in Poland, was ultimately forced to sell to Polish state-run firms.

“Has there ever been a big value-creating cross-border M&A deal in the utility world? I would have to think very hard to find an answer,” said an M&A banker based in Frankfurt, who has worked on German and European sector deals.