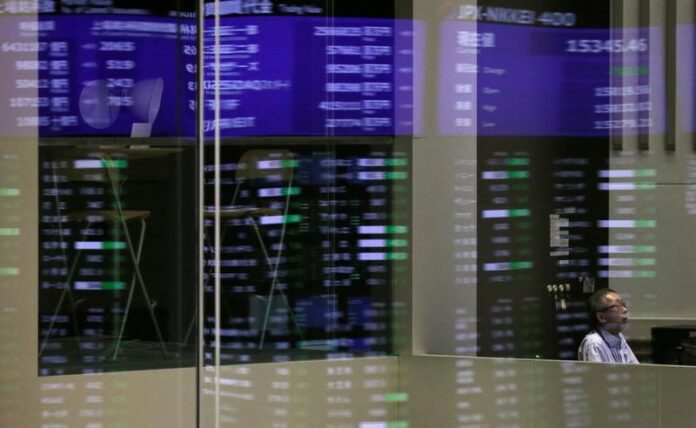 © Reuters. Market prices are reflected in a glass window at the TSE in Tokyo

SYDNEY (Reuters) – Resource stocks were on a roll in Asia on Thursday as oil prices hit heights not seen since late 2014, though the potential boost to inflation globally also pressured fixed-income assets.

The surge came on a Reuters report that OPEC’s new price hawk Saudi Arabia would be happy for crude to rise to $80 or even $100, a sign Riyadh will seek no changes to a supply-cutting deal even though the agreement’s original target is within sight.

“The Saudis and their colleagues in OPEC need higher oil for their fiscal positions and the Kingdom is on a bold – and costly – reform program,” said Greg McKenna, chief market strategist at CFD and FX provider AxiTrader.

“So, they might continue to squeeze the lemon while they have the chance and the hand.”

The leap in oil combined with fears that sanctions on Russia could hit supplies of other commodities to light a fire under the entire sector. Aluminum prices reached their highest since 2011, alumina touched an all-time peak and nickel jumped the most in 6-1/2 years.

Such increases, if sustained, could fuel inflationary pressures and investors hedged by selling sovereign bonds.

MSCI’s broadest index of Asia-Pacific shares outside Japan added 0.15 percent, while E-Mini futures for the edged up 0.1 percent.

Wall Street had also seen hefty gains in the energy and industrial indexes, though that was offset by softness in sectors such as consumer staples and financials.

The Canadian dollar hit a one-week low after the Bank of Canada sounded more dovish than expected, saying it did not know when or how aggressive it would need to be on tightening in order to keep inflation in check.

Sterling was softer at $1.4205 after a surprisingly tame reading on inflation led the market to reconsider the likely pace of future rate rises from the Bank of England.

Data out on New Zealand on Thursday showed annual inflation there had slowed to just 1.1 percent in the first quarter, underlining expectations that interest rates would remain at record lows for many more months to come.