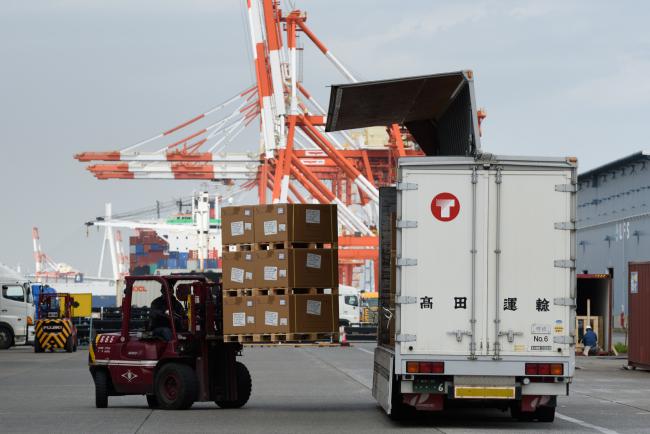 U.S.-Japan Announce Trade Talks, Don’t Agree on What to Discuss

&copy Bloomberg. A worker operates a forklift to load boxes of goods onto a Takada Unyu KK truck at a shipping terminal in Yokohama, Japan, on Monday, April 16, 2018.

(Bloomberg) — President Donald Trump and Japanese Prime Minister Shinzo Abe announced another new trade dialogue Wednesday, while disagreeing on what kind of deal they should aim for.

“The United States is committed to free, fair and reciprocal — very important word — trade. And we’re committed to pursuing a bilateral trade agreement that benefits both of our great countries,” Trump said during a joint press conference with Abe at the end of a two-day summit at Mar-a-Lago, the president’s Florida resort.

Abe responded by saying “I am aware of U.S. interest in a bilateral deal. But we want to approach the discussions from the point of view that the TPP is best for both of the countries,” referring to the Trans-Pacific Partnership trade deal that Trump pulled the U.S. out of in his first week in office.

Japan is the fourth-largest American trading partner, exchanging $200 billion in goods and services annually. In 2017, the U.S. had a $70 billion deficit in that relationship, which Trump has described as “not fair.”

The dispute between the two allies is fundamentally about how they see that status quo on trade. Trump is pushing for an agreement that would reduce the U.S. trade deficit with Japan, while Abe is basically seeking a return to the situation before Trump became president — with the U.S. leading TPP, and no extra tariffs on metals that Trump announced last month.

U.S. Trade Representative Robert Lighthizer and Japanese Economy Minister Toshimitsu Motegi will lead the talks, according to the two leaders, but there was no timetable announced for when the discussions will take place.

“I expect very quick progress,” U.S. Ambassador to Japan William Hagerty told reporters after the press conference, but “I think there’s a lot of work to do.”

A former Japanese ambassador to the U.S. said the comments on trade were “a little incomprehensible.”

“Was there really an agreement on a trade deal? Was it the same as an FTA? Or was it some deals in some sectors? We have to watch and see,” Ichiro Fujisaki said on Bloomberg TV. “From a Japanese point of view, just to lift tariffs on steel and aluminum, which are not huge exports from Japan, doesn’t balance out with a new trade FTA.”

The Motegi-Lighthizer discussions will be part of the current economic dialogue between the two nations. That was announced in February 2017 just after Trump came into office, and is led by Japanese Finance Minister Taro Aso and Vice President Mike Pence.

It has met twice, and while it hasn’t produced major results, it has resolved some outstanding trade issues. After the second meeting last October, restrictions on Japanese persimmons and U.S. potatoes were removed, and Japan promised to streamline some auto testing procedures.

The Trump administration has recently sent mixed messages about possibly rejoining the TPP. Trump campaigned in 2016 to pull out of what was then a 12-nation agreement and did so just after he took office. But he suggested last week that he would consider re-entering the accord “if the deal were substantially better” for the U.S.

Late Tuesday, however, Trump suggested he wasn’t interested. “While Japan and South Korea would like us to go back into TPP, I don’t like the deal for the United States,” Trump tweeted. “Too many contingencies and no way to get out if it doesn’t work. Bilateral deals are far more efficient, profitable and better for OUR workers.”

South Korea isn’t a member of TPP and it’s unknown why Trump mentioned it.

On Wednesday with Abe, Trump showed another possible opening.

“I don’t want to go back into TPP, but if they offer us a deal I can’t refuse on behalf of the United States, I would do it,” Trump said.