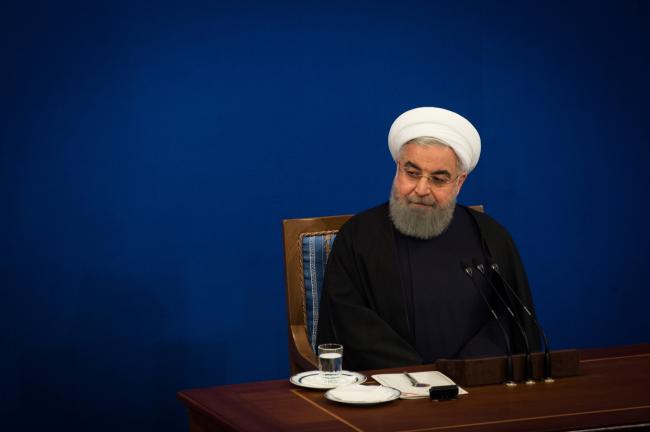 (Bloomberg) — For half a century, Payam’s family hardware firm near Ferdowsi Square (NYSE:) has supplied Tehran’s builders with tools — through revolution, war and more recently sanctions. But it has rarely seen times as bad as these.

A slump in the value of Iran’s rial currency amid a tense standoff with the U.S. has triggered a chain of events that’s paralyzed money markets and businesses. Payam’s range of Bosch and Karcher products is hardly selling, and suppliers are wary of meeting new orders.

“Look at us, we’re sitting here playing with our phones,” he said, requesting his identity be shielded to avoid reprisals for speaking to foreign media.

What’s bad for businessmen, is also bad for President Hassan Rouhani. He needs the popular support that a growing economy would bring to win a domestic struggle with conservative hardliners and entrench his more moderate vision for the country’s future. But a year into his second term, Iran appears to be sliding backward.

Authorities have blamed regional enemies for manipulating pressure on the rial. Yet it’s Iran’s escalating tensions with the Trump administration that’s the biggest driver of the instability. The U.S. will decide by May 12 whether to stay in the 2015 nuclear accord that underpins many of Iran’s economic hopes, or possibly wreck it by leaving.

In recent weeks, Iranian officials ordered banks to raise interest rates on local currency deposits in an attempt to stem demand for dollars, and followed up with a reform of exchange rates and a crackdown on a black market blamed for weakening the rial. According to an April 14 report on state media, the central bank then halted its supply of foreign currency “for the time being,” while also banning exchange houses from carrying out cash transfers abroad through the popular havaleh system, known elsewhere as hawala.

The public affairs office of Iran’s central bank said it wasn’t able to answer questions put by phone for this story. A fax sent outside of normal office hours seeking a response wasn’t immediately answered.

Rouhani’s economy and finance minister, Masoud Karbasian, has described the policy steps as “pre-emptive measures” to contain volatility ahead of any U.S. decision to quit the accord. Together, the moves have brought some stability. But a lack of access to dollars and difficulties transferring cash abroad have hit businesses hard, particularly those that need to import their wares or raw materials.

Central Bank governor Valiollah Seif signaled on Saturday that Iran needed to prevent capital flight and allocate foreign currency for what the nation needed most.

“Capital flight is a serious matter,” Seif was quoted as saying by the Donya-e-Eghtesad newspaper’s Sunday edition. “Foreign currency emanating from oil and non-oil sales are our national resources and needs to be utilized in an optimal manner, including toward imports of essential goods.”

“Our main suppliers are closed,” said Payam. “The reason is the price of the currency. We’re waiting to see what Mr. Trump will say.” The shutting of the havaleh network has made life even harder, he said. The company’s price list showed the cost of a German-made machine for stripping paint had risen 20 percent in two months, driven up by the rial’s depreciation.

Iran appears to be expecting the worst. Officials have publicly mulled possible responses to a U.S. pull-out, including restoring its mothballed uranium enrichment or quitting the nuclear Non-Proliferation Treaty. They have also begun a so-far largely symbolic effort to reduce the importance of the dollar in Iran’s oil-dominated economy by announcing plans to switch to the euro for official accounting.

“Iran has vowed to depart from the dollar before to show its independence and ability to adopt,” said Ali Dadpay, a professor of economics at St. Edwards University in Austin, Texas, who studies Iranian affairs. Still, the primary motivation now is probably the growing power of the dollar to affect currency-exchange markets, he said.

For Iranian businesses, “most foreign trades, if not all, are based on dollars. So switching to the euro” will add to costs, Dadpay said.

In White House visits this week, the leaders of France and Germany are urging Trump not to dismantle the hard-won diplomatic achievement that temporarily capped Iran’s nuclear program in return for sanctions relief and re-engagement with the world economy.

Some in Europe share Trump’s concerns over issues like Iran’s ballistic missile program, but argue the world is safer with the deal than without it. French President Emmanuel Macron signaled on Wednesday that he might have failed to persuade Trump. Iran is opposed to any renegotiation of the deal.

Several blocks from Payam’s store, a normally bustling area of registered currency traders was all but empty, as workers sat idly behind glass counters.

Black-market traders, whom the government has vowed to tackle as if they were drug dealers, weren’t difficult to find. Some sat on roadside benches while others lingered in doorways, muttering dollar-rates to passersby of around 55,000 rials, significantly more than the 42,000 set by the central bank.

Patting sweat from her brow, 46-year-old housewife Maryam said she had visited every foreign-exchange seller along a two-kilometer (1.2 mile) stretch of Ferdowsi Avenue, vainly searching for dollars or euros ahead of a rail trip to Turkey.

“One dealer said he’d sell me them, but illegally, and the price was too high,” she said.

Mahdy Farhadian, managing director of the Tehran-based contemporary carpet business Modeno, compared doing business in Iran today to a game of “musical chairs” where the winners strike lucky with their procurement cycles.

In March, Modeno imported enough stock to last 12 months from manufacturers in India, just before the money market crisis. Currency transactions and linked customs procedures will be heavily controlled” from now on, Farhadian said. “Soon there won’t be enough supply, so inventory levels will come down and the market value of stocked goods will go up.” Prices are likely to rise.

Payam fears a return to the isolation Iranians suffered before the nuclear accord promised a business revival. “Brands like Bosch came here because of the nuclear deal. But with this situation, they’ll just pack up and leave again. It’ll be like the past,” he said.