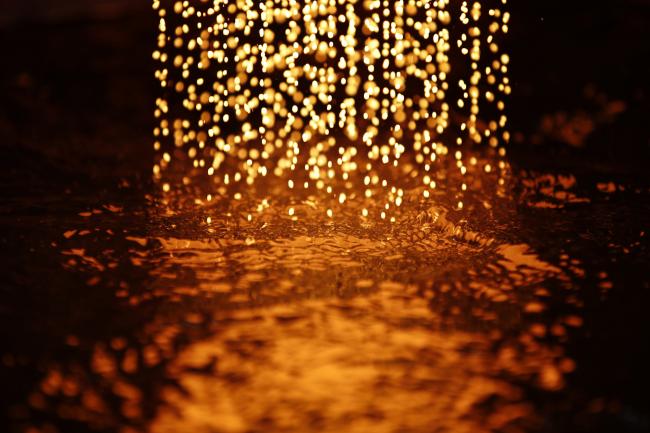 © Bloomberg. Molten gold hits the surface of the water to cool and produce gold casting grain during the refining process. Photographer: Stefan Wermuth/Bloomberg

(Bloomberg) — One investor traded 1 million shares worth $124.5 million in the SPDR Gold Shares (HK:) fund, known by its ticker GLD (NYSE:), at 1:22 p.m. N.Y. time, the largest single intraday block trade for this fund since January 10.

Gold prices have been volatile, dipping since mid-May as the U.S. dollar has strengthened amid signs of a stabilizing global and U.S. economy. Earlier this week, U.S. Federal Reserve officials left interest rates unchanged, but noted that inflation is close to target, without indicating any intention to veer from their gradual tightening of monetary policy.

GLD is the largest exchange-traded fund tracking the commodity with more than $36 billion in assets. The fund saw about $1.1 billion of inflows in April, the most since September, according to data compiled by Bloomberg. Since then, investors have yanked about $236 million worth of bets, the data show.

“The primary deterrents to a gold, silver and platinum rally would be sustained reversals of favorable trends in inflation, stock-market volatility and the weakening dollar,” according to Bloomberg Intelligence strategist Mike McGlone. “Recent strength in the buck on the back of higher Treasury yields should be a short-lived headwind.”