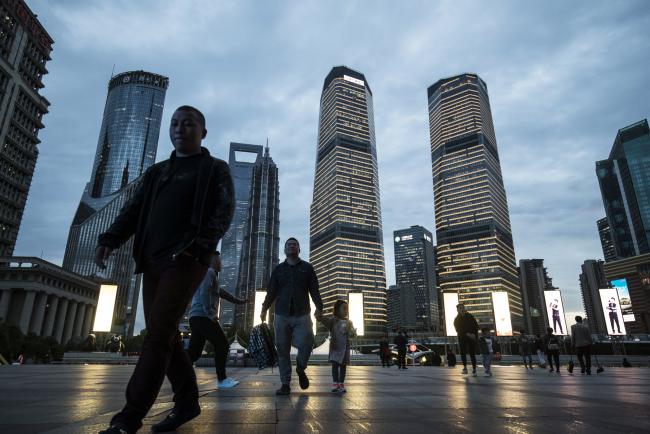 © Bloomberg. Pedestrians walk past commercial buildings illuminated at dusk in the Lujiazui Financial District in Shanghai, China, on Friday, Oct. 13, 2017.

(Bloomberg) — China’s financial regulator stepped up its crackdown on industry malpractice, imposing a total 183 million yuan ($29 million) of fines on three institutions for transgressions including lax lending practices and understating of risky assets.

They represent the largest fines since China reshuffled its supervisory regime in March by combining the banking and insurance regulators under Guo Shuqing, who had helmed the banking regulator for about a year prior to the merger. Guo has vowed to keep “fighting the battle” to defuse risks and root out malpractice in the $43 trillion financial industry.

Unlike his predecessors who tended to rely on internal reprimands, Guo has imposed stiff penalties on offenders, fired their executives and disclosed details of the violations.

More than 2.9 billion yuan of penalties and confiscations of funds were imposed on 1,877 financial institutions in 2017, a 10-fold surge from the previous year. Some 270 banking executives were punished, including some who were banned from the industry for life.

Greater regulatory scrutiny could cut into banks’ profitability by limiting their business opportunities, forcing them to bring more loans back onto their balance sheets and weakening their capital strength, Fitch Ratings warned in January. The cost of more stringent risk management and compliance is likely to be more significant than the fines themselves, according to the ratings company.

Merchants Bank fell 0.8 percent in Hong Kong while Shanghai Pudong and Industrial Bank declined about 0.3 percent in Shanghai as of 9:50 a.m.

To contact Bloomberg News staff for this story: Jun Luo in Shanghai at [email protected]

To contact the editors responsible for this story: Marcus Wright at [email protected], Russell Ward