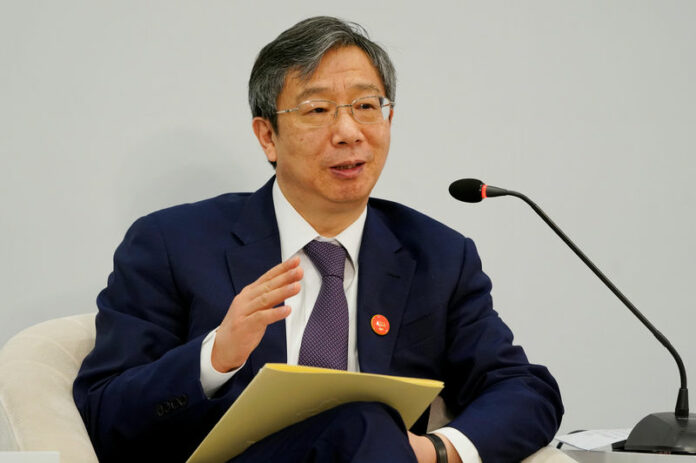 © Reuters. People’s Bank of China (PBOC) Governor Yi Gang speaks at a panel at the Boao Forum for Asia in Qionghai

BEIJING (Reuters) – China’s “huge” trade imbalance with the United States is a structural and long-term problem and should be viewed with rationality, the Chinese central bank governor was quoted as saying by financial magazine Caixin.

Yi Gang, appointed to head the People’s Bank of China (PBOC) in March, also called for concerted efforts from the United States and China to resolve the trade dispute, Caixin said in a report published late on Friday.

The comments came after an inconclusive two-day meeting between Chinese and U.S. top level officials in Beijing amid escalating tit-for-tat tariff threats between the world’s two biggest economies. Washington demanded that China reduce its trade surplus with the United States by at least $200 billion by the end of 2020, according to sources.

China’s opening up will not be affected by the current trade frictions with the United States, Yi said.

Yi only weighed in briefly on the U.S.-China trade issue in an extensive interview with Caixin in Washington in late April. The PBOC governor reiterated China’s existing stance on a variety of matters including monetary policy, the opening up of its economy, the yuan and the country’s deleveraging efforts.

He reiterated China’s commitment to its prudent and neutral monetary policy and its focus on stabilizing its macro leverage ratio and reducing financial risks. On the currency front, Yi said that the PBOC has not intervened in the foreign exchange market for almost a year now, and authorities are committed to market-based foreign exchange rate reform.

China will also push for the convertibility of the capital account to coincide with the opening up of the financial sector, Yi said. Beijing in recent weeks said it will resume two key outbound investment schemes, allowing domestic financial institutions to invest in overseas securities.

However, in the process of opening up, China will step up the oversight of cross-border capital flows, prevent the contagion of cross-border financial risks and fend off international arbitrage, Yi said.

In it deleveraging campaign, China will take aim at debt levels of local governments and state-owned firms, Yi added.