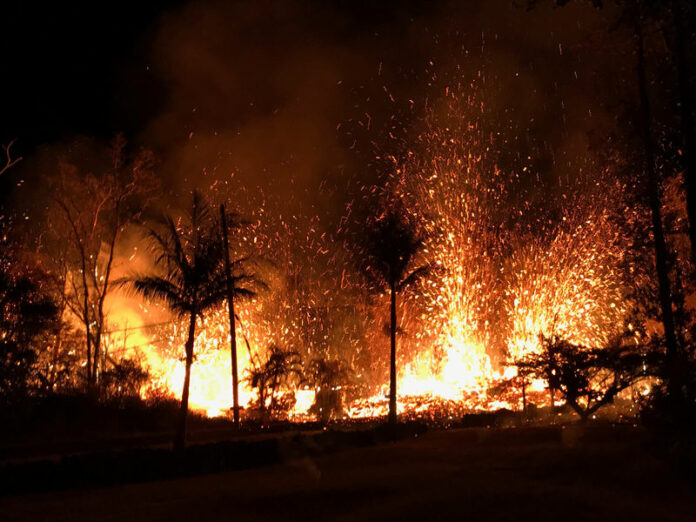 © Reuters. Handout photo of a new fissure spraying lava fountains as high as about 230 feet (70 m), according to United States Geological Survey, is shown from Luana Street in Leilani Estates subdivision on Kilauea Volcano’s lower East Rift Zone in Hawaii

PAHOA, Hawaii (Reuters) – Jeremy Wilson knew it was risky renting a home in an area with the highest hazard level for lava flows in Hawaii, but it was all he could afford for his family of six.

Now, with magma spewing from cracks in the earth above and below his 3-bedroom home, he fears it could join the 26 other houses destroyed since the eruption of the nearby Kilauea volcano on Thursday, according to Hawaii County Civil Defense.

“I’m a renter but everything we own is in that house,” said Wilson, a 36-year-old social worker, who moved to the Leilani Estates subdivision four years ago and is among 1,700 residents who have evacuated since the eruption.

The semi-rural wooded area, with dirt roads and many homemade “off the grid” houses, is a landing pad for newcomers to Hawaii’s Big Island who cannot afford real-estate prices elsewhere.

“If you want to live in Hawaii, it’s really your only option,” said Wilson, who has been staying with friends along with his two children, wife, mother-in-law and uncle since they were forced to flee.

Keeping prices low in Leilani Estates is the “Zone 1” (out of nine) hazard rating for lava-flows the U.S. Geological Survey gives the area due to “vents that have been repeatedly active in historical time.”

Geologists say this week’s activity is beginning to look like an event in 1955 in which eruptions continued for 88 days in the area and covered around 4,000 acres with lava, though few people lived there back then. More recently in 2014, lava threatened the nearby Puna district and the town of Pahoa.

Jessica Gauthier, 47, a realtor in Leilani Estates, said the eruption of Kilauea, about 12 miles (19 km) distant, was a reality check for new residents.

“People move here thinking it’s paradise, and what they learn is that it’s something different,” said Gauthier.

Eruptions of lava and toxic sulfur dioxide gas continued within the subdivision, and larger aftershocks from Friday’s 6.9 magnitude earthquake were expected, the observatory said.

A lava flow advanced about a mile from one of ten vents that have opened. As the lava finds a preferred route, some vents are expected to close, putting pressure on others and shooting magma up to 1,000 feet (305 m) into the air. On Saturday it reached heights of 230 feet.

Some residents saw eruptions as inevitable and said if Pele, the Hawaiian volcano goddess, wanted the land back, then she would take it.

Wilson, who grew up in Springfield, Missouri, was less philosophical. He has been trying to rescue his possessions before they are torched.

He was forced back on Sunday when he saw smoke coming from cracks in the road on the approach to his house.

“I’m from Tornado Alley. So I’m no stranger to disasters, but this is something else,” said Wilson. “This is crazy.”