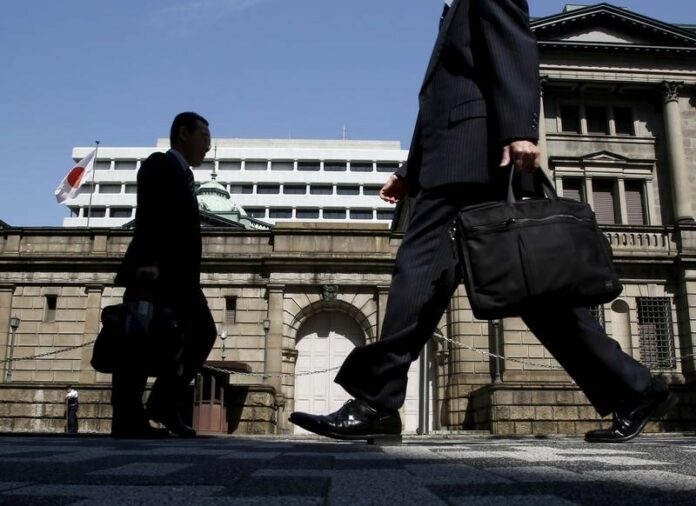 TOKYO (Reuters) – The Bank of Japan is working to prepare markets for a future withdrawal of its huge stimulus program, with some policymakers calling for more scrutiny of the rising cost of prolonged easing, a summary of debate at the April rate review showed.

One of the nine BOJ board members said the central bank must find ways to gain public understanding that it is ready to dial back monetary support if the economy continues to improve, the summary released on Thursday showed.

“It’s necessary to give a clear definition on what we mean by an ‘exit’ from easy policy and ‘policy normalization’,” the policymaker was quoted as saying.

The BOJ kept policy steady at the April meeting, but ditched a timeframe it had set for hitting its 2 percent inflation target, a surprise move analysts say is aimed at keeping market expectations for more stimulus in check.

Some members reiterated the need to maintain ultra-easy policy and even strengthen the BOJ’s commitment to hit its 2 percent inflation target with price growth still distant from that level, the summary showed.

But others said the central bank must focus more on the rising demerits of its policy, such as the damage that years of near zero rates is inflicting on financial institutions’ profits.

“Looking at recent developments in corporate bond markets and bank lending, the effect of monetary easing … on economic activity and prices could be becoming smaller,” one of the members was quoted as saying.

“It’s important to further scrutinize the appropriate shape of the yield curve, as the cumulative impact on banks’ financial strength becomes increasingly severe,” the member said, advocating raising the BOJ’s bond yield target in the future.

Another member said the BOJ should continue to take a careful look at both the merits and demerits of the bank’s purchases of risky assets such as exchange-traded funds (ETF).

Under its yield curve control (YCC) policy, the BOJ guides short-term interest rates at minus 0.1 percent and the 10-year government bond yield around zero percent.

The summary, issued about two weeks after the BOJ’s policy meeting, is a list of opinions voiced by its board members. It does not disclose the name of the member who made the comment.