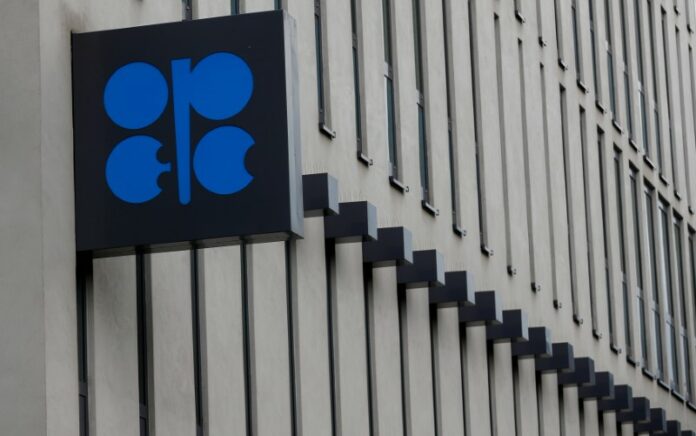 OPEC in no hurry to decide if extra oil needed to offset Iran: sources © Reuters. FILE PHOTO: The OPEC logo is pictured at its headquarters in Vienna

LONDON (Reuters) – OPEC is in no hurry to decide whether to pump more oil to make up for an expected drop in exports from Iran after the imposition of new U.S. sanctions, three sources familiar with the issue said, saying any loss in supply would take time.

The Organization of the Petroleum Exporting Countries has a deal with Russia and non-OPEC producers to cut supplies that has helped erase a global glut and boosted oil prices to their highest since 2014.

Officials are considering whether a drop in Iranian exports and a decline in supply from another OPEC member, Venezuela, demands adjusting the deal that runs to the end of 2018. Ministers meet in June to review the policy.

U.S. sanctions on Iran will have a six-month period during which buyers should “wind down” oil purchases, meaning any loss of supply will not be immediately felt in the market.

“I think we have 180 days before any supply impact,” an OPEC source said when asked about any plans for action.

A second OPEC source said that, while the need to add extra supply was being considered, the safest thing for the group to do for now was to sit tight and monitor the situation.

Oil () reached $78 a barrel on Thursday, its highest since November 2014, two days after President Donald Trump said the United States was abandoning an international nuclear deal with Iran and would impose new sanctions.

Iran, which pumps about 4 percent of the world’s oil, exports about 450,000 barrels per day (bpd) to Europe and around 1.8 million bpd to Asia. Sales to Europe are seen by analysts as the more likely to be reduced by the sanctions.

As part of the supply deal, OPEC pledged to cut 1.2 million bpd from supplies from its members. In practice, the group has overshot this, partly because Venezuelan output has plunged due an economic crisis.

Oil ministers from OPEC and its partners meet on June 22-23 in Vienna to review the existing agreement.

Before that, technical officials meets on May 22-23 when the issue of whether extra barrels are needed to offset any Iranian loss will likely come up, the second source said.

A third OPEC source also said it was too soon to tell if extra oil was needed, citing Iran’s ability to keep much of its exports flowing under a previous round of sanctions. “Too early to judge,” he said.

On Wednesday, a separate OPEC source had said Saudi Arabia was monitoring the impact of the U.S. move on oil supplies and was ready to offset any shortage but would not act alone.

This source had also said the impact of U.S. sanctions on Iranian supplies needed to be assessed first and Saudi Arabia did not expect any physical impact on the market until the third or fourth quarters.