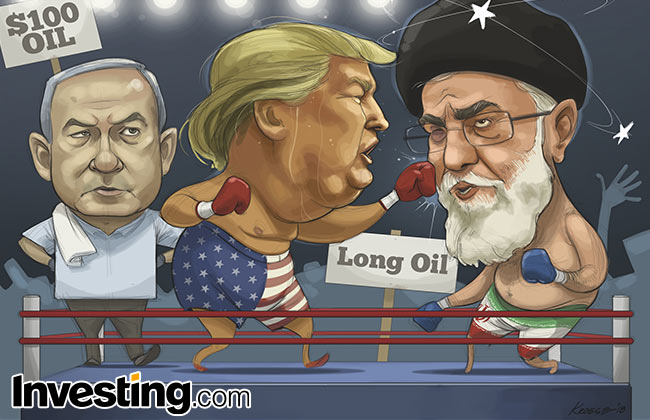 Investing.com – Oil prices surged to their this week, after U.S. President Donald Trump walked away from an international nuclear deal with Iran and reimposed “the highest level of economic sanctions” against the country.

Trump said he quit the deal because Tehran continues to work on a bomb, based on evidence provided by Israeli Prime Minister Benjamin Netanyahu, and it backs terrorist groups around the Middle East.

Oil prices clocked up more multi-year highs on Thursday, as futures rose sharply in response to the announced measures.

, the international benchmark for oil prices, hit their highest since November 2014 at $78.00 per barrel.

Worries over geopolitical tension surrounding Iran could mean that oil prices move closer to the $80-$100 range than the $60s-to-$70s expected by analysts this year.

Goldman Sachs (NYSE:) said the planned unilateral U.S. sanctions against Iran would likely have a “high level of efficiency”.

As a result of sanctions and because of risks to supplies elsewhere, especially in Venezuela, the U.S. bank said “this leaves risk our summer $82.50 per barrel Brent price forecast (is) squarely skewed to the upside”.

Sanctions come amid an oil market that has already been tightening due to ongoing efforts by Saudi Arabia and Russia to cut back on production to reduce a glut.

Share
Facebook
Twitter
Pinterest
WhatsApp
Previous articleOPEC in no hurry to decide if extra oil needed to offset Iran: sources
Next articleBank of England to wait out soft data as it eyes next rate rise