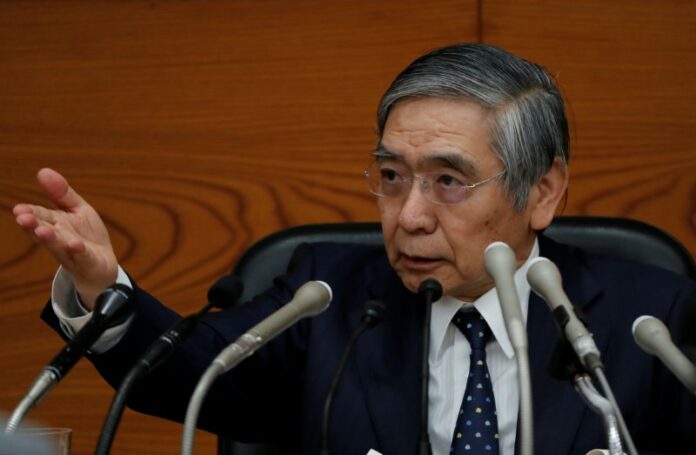 BOJ’s Kuroda calls on government to step up structural reform

TOKYO (Reuters) – Bank of Japan Governor Haruhiko Kuroda said more work needs to be done to boost the country’s growth potential, making a rare call for the government to deliver on its growth strategy – the third arrow of premier Shinzo Abe’s reflationist policies.

Kuroda said the government had made “significant” progress on reforms to fix Japan’s worsening fiscal state, albeit with some delay.

The BOJ also agreed with the government on the need to maintain its ultra-loose monetary policy to lift Japan sustainably out of deflation, he said.

Still, Kuroda said there was more work to be done on deregulation and structural reforms, the third arrow of the premier’s “Abenomics” policies to reflate the economy.

Critics say the Japanese labor market and heavily-protected industries, such as healthcare and the agriculture sectors, are in urgent need of reform.

“It’s true there is some lag before the steps already taken begin to affect the economy. We need to take that into account,” Kuroda told parliament on Friday.

“Having said that, there are still some steps remaining that the government needs to take on structural reform and growth strategy,” he said, when asked by an opposition lawmaker on how he felt about the government’s fiscal and structural policies.

In the same parliament session, Finance Minister Taro Aso said the government and the BOJ would work together and deploy “all available measures” to achieve strong growth.

“I hope the BOJ continues its bold monetary easing and yield curve control to achieve its price target,” Aso said.

After winning power in 2012, Abe deployed his “Abenomics” brand of reforms consisted of bold monetary easing, fiscal stimulus measures and a growth strategy.

While the fiscal and monetary stimulus measures helped weaken the yen and raised corporate profits, many analysts say the government has made little progress on structural reforms.