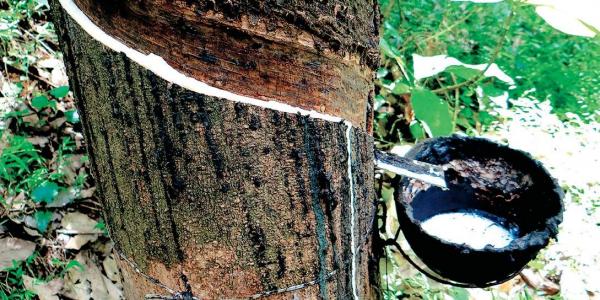 Natural rubber prices in India had reached an all-time high at Rs 243 per kilo in 2011 when the global crude oil averaged above 100$/barrel.

KOCHI: With the crude oil prices slowly inching towards $80/barrel, the synthetic rubber is becoming less attractive for rubber-based industries including tyre makers, boosting the prices of natural rubber (NR).

NR prices shot past Rs 120/kg recently as crude touched the highest price since 2014. Natural rubber prices in India had reached an all-time high at Rs 243 per kilo in 2011 when the global crude oil averaged above 100$/barrel. Since then, NR prices has been on a downward spiral, hitting a low of Rs 95/kg in 2015.

The USA’s withdrawal from the Iran nuclear deal is set to drive up crude oil prices even further. The global NR prices have touched Rs 118 per kilo today, while its domestic counterpart is trading at Rs 122/kg for the RSS-4 variety.

“It’s widely observed that the demand for NR pick up as crude oil and corresponding synthetic rubber prices go up,” said N M Mathew, vice chairman, Indian Rubber Institute. He added that despite the incoming monsoons, domestic production will pick up once NR prices register a significant growth.

Commenting on other factors that affect the NR price, N Rajagopal, secretary-in-charge, Rubber Board India, said that demand for NR from China and currency exchange rates play a prominent role in determining the price of NR.

China is the largest consumer of NR, consuming close to 40 per cent of the total global production. With decades of fast-paced growth led by exports, the global recession had forced the Chinese economy to transition more into a domestic consumption-led economy. This had resulted in a slowdown and depleting demand, which is now stabilizing with the economy posting a stable growth rate in the last few quarters, experts said.

The drop in the value of rupee against the dollar might also help domestic NR prices to pick up as imports become less attractive. The rupee breached 67/dollar on Wednesday, which is a 15-month low. As global rubber prices are rising,

Indian manufacturers will be forced to turn to domestic producers to fulfill their demand, which in turn will benefit the local rubber farmers. However, block rubber from east Asian markets still trades Rs 25-30 cheaper per kilo when compared to domestic sheet rubber varieties. Block rubber constitutes about 70 per cent of the rubber imported by the tyre-manufacturing companies in India.

The high growth rate of Indian economy has resulted in record demand for NR in the past few years with consumption crossing well over 10 lakh tonnes. Sadly, with global NR prices staying lower than domestic supply, imports have been flooding the market.

Commenting on the rubber grower’s plight, Thomson M, a resident of Waynad, says anything lower than Rs 120 per kilo makes it difficult to meet the cost of production. He added that the govt’s support price of Rs 150 per kilo is often delayed by months, making it hard for farmers to sustain themselves.

With the global GDP growing 3.8 percent last year, its strongest year since 2011, there is hope for global demand picking up further to result in a possible NR price hike. Actions like the East-Asian countries’ (Thailand, Indonesia and Malaysia) efforts to limit exports of NR earlier this year can further boost the global NR prices.