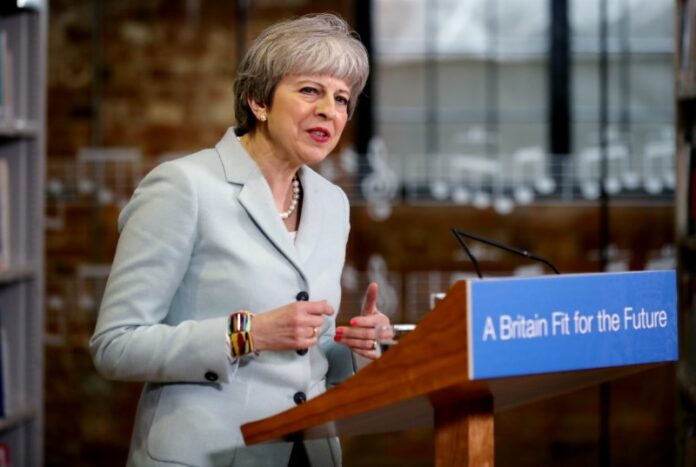 “Get on with it.”: British PM May under pressure on EU customs decision 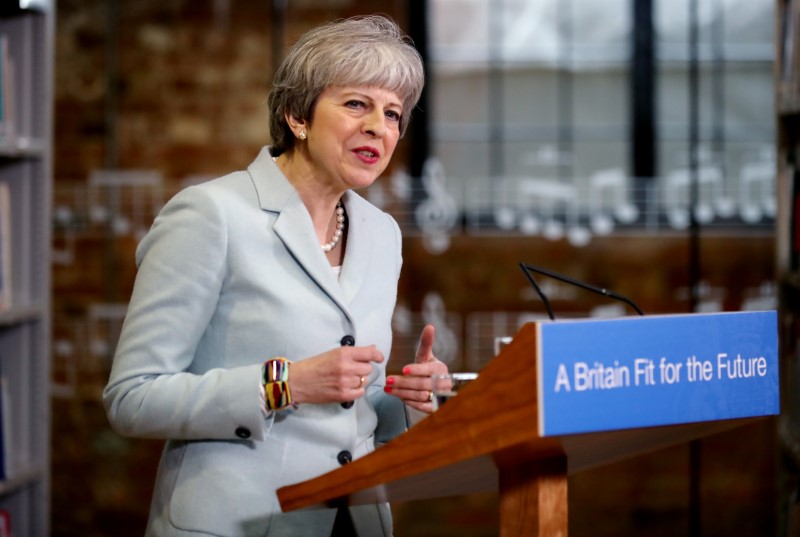 © Reuters. Britain’s PM May delivers a speech to students and staff during her visit to Derby College in Derby

LONDON (Reuters) – A row over Britain’s future customs arrangements with the European Union has left the opposing Brexit camps more deeply entrenched than ever and Prime Minister Theresa May facing one of her toughest decisions yet.

Under pressure from the EU to move forward with talks on a future partnership, May must settle on a customs proposal to unite, or at least not tear apart, her government, her party, Britain’s parliament and one that could be backed by the EU.

She has even divided her cabinet into two camps to work on improving the two proposals now on offer to try to make one of them more palatable to the warring factions.

There is little time. The EU is expecting her to have made progress by a summit in June and both sides want to reach a deal by October. Crucial bills must also be passed by parliament before Britain’s EU departure next March.

“We have to get to a position that represents what people voted for. And then deliver it,” said a senior source in May’s governing Conservative Party.

The battle is the latest in what is a long series of conflicts waged not only inside her own party, but in Britain’s upper and lower houses of parliament and across a deeply divided country since it voted to leave the bloc in 2016.

Pro-EU campaigners, buoyed by government defeats in the upper House of Lords, are stepping up their calls for Britain to keep as close as possible to the bloc. Brexit supporters are trying to ensure May keeps to her word on making a clean break so that Britain can “take back control” of its laws, money and borders.

So far, May has little option and no desire to do anything but stick to her well-worn script that Britain will leave the EU’s economic single market and customs union. The opposition Labor Party is happy to leave her to it.

But as time ticks by, those decisions that have been kicked down the road are becoming increasingly pressing as EU negotiators wait for Britain’s detailed position not only on customs, but also on the wider trade agreement and governance.

She is increasingly under pressure to make a decision.

Some say May’s preferred option is a customs partnership. Under this proposal, Britain would collect tariffs on goods entering the country on the EU’s behalf.

The second is for a streamlined customs arrangement now known as “max fac” — maximum facilitation. Under this proposal, traders on an approved list or “trusted traders” would be able to cross borders freely with the aid of automated technology.

The proposals have split May’s cabinet of top ministers, and her party, down the middle.

Those wanting to maintain the closest possible ties to the EU back the partnership, including business minister Greg Clark who has said that hundreds of jobs in car manufacturing would be vulnerable if Britain could not trade freely with the EU.

But the partnership is an anathema to Brexit campaigners, who say it would essentially keep Britain within the confines of the EU’s customs union. May’s foreign minister, Boris Johnson, called it “crazy”.

They support the max fac option, which critics say could take years to set up.

One campaigner told Reuters the Conservative Brexit camp was “on maneuvers” to make sure May delivers on her pledge to leave the customs union.

She has tasked officials with doing more work on both options and split some ministers into two teams to brainstorm to find solutions to overcome the obstacles.

“This is being worked on as a priority,” May’s spokesman said.

But the lack of decision has coincided with growing calls for Britain to stay in the customs union with the EU, a move its supporters say could solve the problem of a new hard border with Ireland that could fuel sectarian violence.

The House of Lords, sent a clear message to May in a series of votes on the EU withdrawal bill over the last three weeks, challenging her refusal to stay in the customs union and her plan to leave the EU’s single market.

Some pro-EU Labour and Conservative lawmakers in the House of Commons hope they can muster enough support to prevent the government reversing those amendments in votes in the lower house, though their ability to do so is in doubt.

“Parliament is finally taking control of Brexit and is seeing off a minority of ideologically driven hard Brexiteers,” Conservative lawmaker Anna Soubry said this week on Twitter.

If the rebels are to have any chance of forcing May’s hand, the Labour Party would have back moves to stay in the customs union and single market. This means it would have to change its position and accept the continued free movement of people.

Labour would like a new customs union that would allow Britain to break free from the EU’s state aid rules.

The pressure is rising for Labour to change position.

“Our region is an export powerhouse,” five Labour lawmakers from northern England wrote this week.

“All of that could be at risk if we quit the EU customs union and the single market and are lumbered with new customs barriers, charges and unnecessary red tape.”