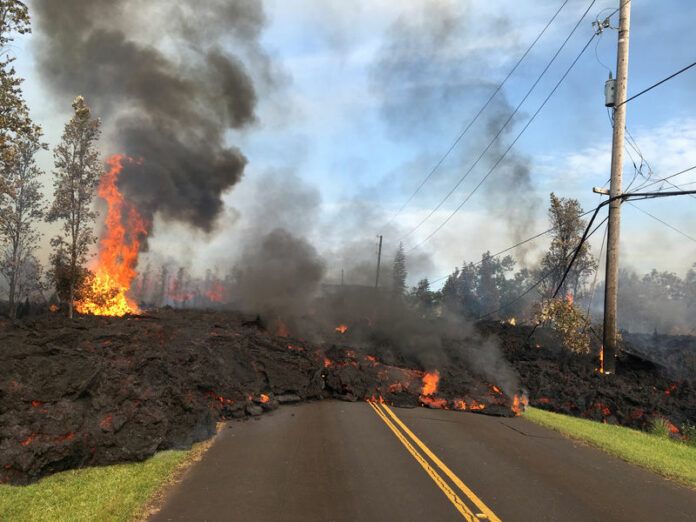 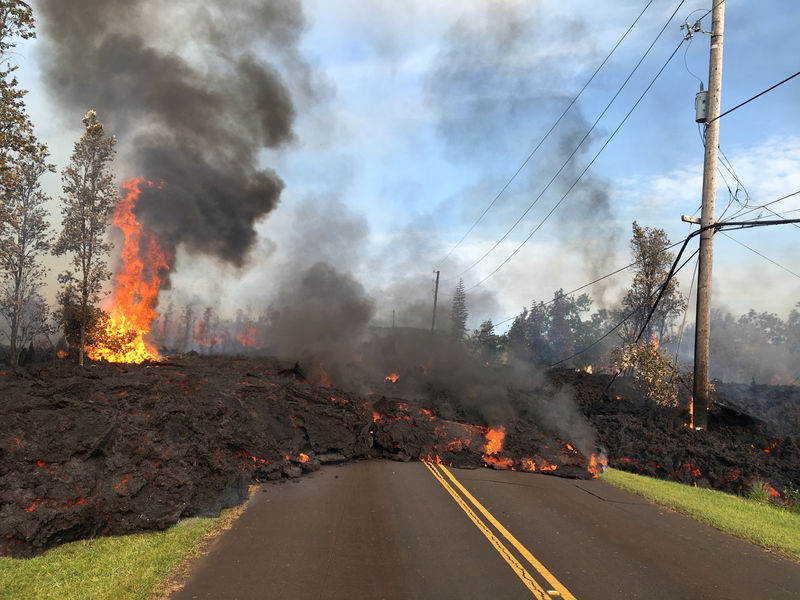 © Reuters. Lava advances along a street near a fissure in Leilani Estates, on Kilauea Volcano’s lower East Rift Zone, Hawaii

PAHOA, Hawaii (Reuters) – More than a week after the eruption of the Kilauea volcano, Hawaii residents felt tremors and earthquakes on Friday as molten rock flowed underground towards a rural area where more lava was expected to burst to the surface and threaten homes.

Fifteen large cracks or fissures have so far opened on the eastern flank of Kilauea, one of the world’s most active volcanoes, destroying dozens of houses and forcing thousands from their homes on Hawaii’s Big Island.

Fissure activity has paused but new lava outbreaks were expected in or around the hard-hit Leilani Estates area in the southeast Puna District, about 20 miles (32 km) south of Hilo, the Hawaii Volcano Observatory and local authorities said.

Steaming ground cracks from volcanic activity, the first signs a fissure may open, closed roads in areas to the northeast and southwest of Leilani Estates, where scientists believe the next lava vents may appear.

“I’ve been feeling earthquakes. Lots and lots of tremors,” said Cindy Conda, whose house lies just east of Leilani Estates where 27 homes have been torched by lava in the last eight days.

Conda said that at a meeting Thursday night, Hawaiian Volcano Observatory scientist Steve Brantley told residents that lava that has lain dormant in the area since a 1955 eruption was being forced to the surface by Kilauea’s activity.

“He said ‘That lava’s underneath your house,'” said Conda. “Really it’s worrying, we’ve been doing a lot of praying. There is not much else you can do.”

The first steam-driven explosive eruptions on Kilauea in nearly a century may soon begin, dusting downwind communities with ash that is an eye and respiratory irritant, observatory scientists said.

The national park around the summit was closed to visitors on Thursday, given the risk that the eruptions could launch refrigerator-sized “ballistic blocks” over half a mile and hurl pebble-sized projectiles for miles.

Residents of Kona on the west coast of the island have complained of volcanic smog, or vog, from the large amounts of sulfur dioxide and other pollutants spewing from Kilauea.

Hawaii’s governor warned that mass evacuations may be required in the lower Puna district as more fissures open.

Kilauea’s eruption began last week after the crater floor of a long-active side vent collapsed in a cloud of ash, triggering a plunge in the lava lake inside the larger summit crater.