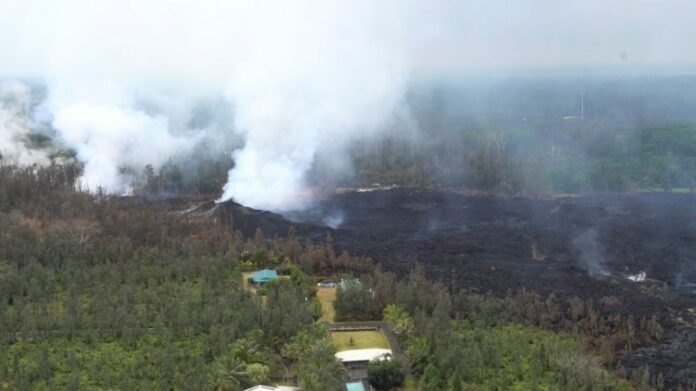 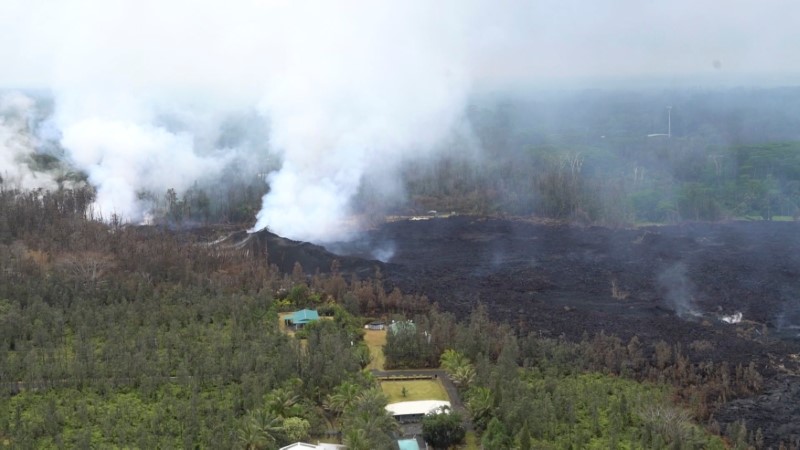 © Reuters. Aerial image of molten rock flowing and bursting to the surface threatening homes in a rural area in Hawaii

PAHOA, Hawaii (Reuters) – Dozens of tremors rattled residents on Hawaii’s Big Island on Friday as molten rock from Kilauea volcano flowed under an area where homes have already been destroyed by fiery lava geysers.

Fifteen large cracks or fissures have opened on the eastern flank of Kilauea, one of the world’s most active volcanoes, destroying dozens of houses and other structures and forcing around 2,000 people to evacuate their homes.

New outbreaks of lava were expected in or around the hard-hit Leilani Estates area in the southeastern Puna district, about 20 miles (32 km) south of Hilo, the Hawaii Volcano Observatory and local authorities said.

Steaming cracks in the ground, the first sign a fissure may be opening, closed roads in areas to the northeast and southwest of Leilani Estates where scientists believe the next lava geysers may appear.

“I’ve been feeling earthquakes. Lots and lots of tremors,” said Cindy Conda, whose house lies just east of Leilani Estates where 27 homes have been torched by lava in the last eight days and whose residents have all been evacuated.

At a meeting on Thursday night, Hawaiian Volcano Observatory scientist Steve Brantley told residents that magma created by a 1955 eruption was being forced to the surface by Kilauea.

“He said ‘That lava’s underneath your house,'” said Conda. “Really it’s worrying; we’ve been doing a lot of praying.”

Volcanic activity has broken water lines, knocked out power and forced some schools to close in the village of Pahoa, which is only a few miles from the fissures.

While locals contend with lava and gas on the ground, explosions at Kilauea’s summit, some 25 miles (40 km) to the west are dusting downwind communities with ash that is an irritant to eyes and breathing.

The Hawaii Volcanoes National Park around the summit was closed to visitors on Thursday, given risks of the first explosive eruptions in nearly a century, which could launch refrigerator-sized “ballistic blocks” over half a mile (0.8 km) and send ash columns tens of thousands of feet into the atmosphere.

Residents of Kona on the west of the island have complained of volcanic smog, or vog, from the large amounts of sulfur dioxide and other pollutants spewing from Kilauea. Further afield, people said it was “very voggy” on the streets of state capital Honolulu, around 210 miles (340 km) northwest of Kilauea on the island of Oahu.

(For a graphic on ‘Hawaii’s Kilauea volcano’ click https://tmsnrt.rs/2rmXdVZ)