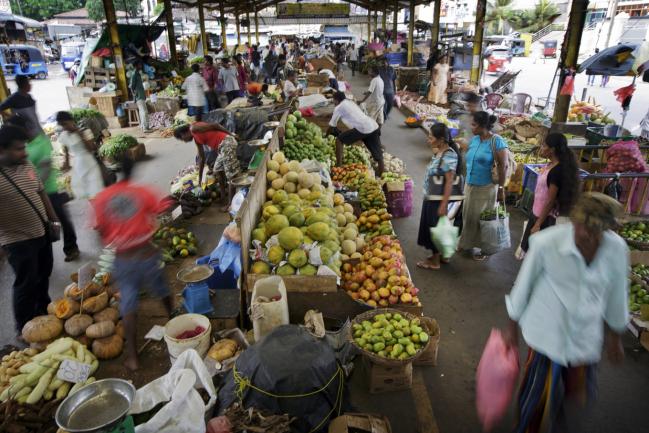 © Bloomberg. Customers shop at a fruit and vegetables stall at a market in the Pettah area of Colombo, Sri Lanka, on Sunday, July 19, 2015.

(Bloomberg) — Sri Lanka’s central bank kept monetary policy on hold after a deceleration in inflation allowed room for a pause.

Governor Indrajit Coomaraswamy held the standing lending facility rate at 8.50 percent and the standing deposit facility rate at 7.25 percent, the Central Bank of Sri Lanka said in a statement in Colombo on Friday. The move to hold the deposit rate was predicted by six out of seven economists surveyed by Bloomberg, while one forecast a 25 basis point increase. All seven expected the central bank to hold the lending rate.

Favorable domestic supply conditions helped headline inflation decelerate to low single digit levels, the central bank said in a statement. Inflation is projected to remain within the 4-6 percent target range over the medium term and a moderate economic recovery is seen due to improved global and domestic conditions, it said.

Sri Lanka’s economy is expected to expand 4 percent and inflation is seen below 5 percent in 2018, even as the island nation remains vulnerable to adverse shocks due to sizable public debt, large refinancing needs, and low external buffers, the International Monetary Fund said last month.

Coomaraswamy, who described the central bank’s policy outlook as neutral on April 20, cut lending rate by 25 basis points in the previous policy, the first easing in three years, to boost an economy that expanded at the slowest pace since 2001.