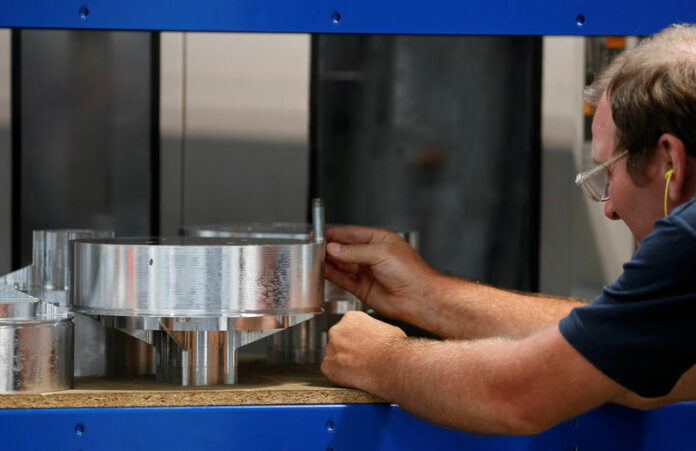 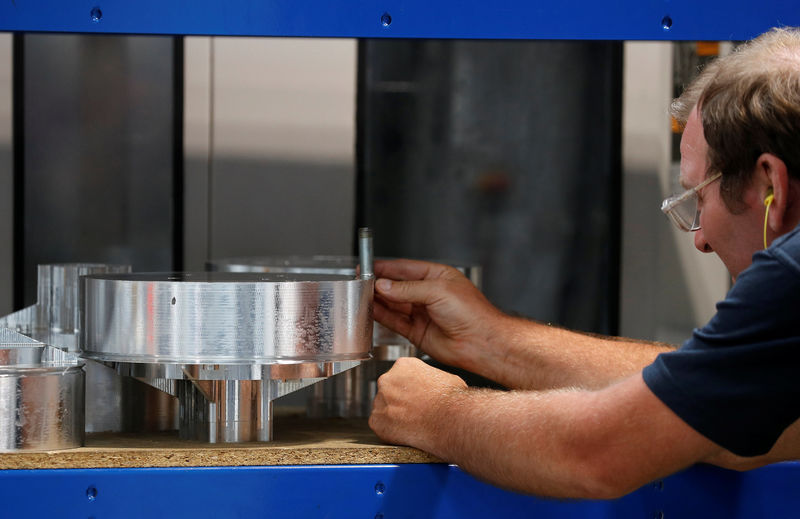 © Reuters. Worker examines an aluminium component inside Produmax in Shipley

SHIPLEY, England (Reuters) – Mandy Ridyard knew Brexit was going to be a challenge for her aviation components firm, but it was still a shock when she heard a French company bluntly ruling out British suppliers from an international bid for a contract in China.

There was just too much uncertainty about Brexit to include British companies in the group, a representative of the firm told a meeting of business representatives and government officials from Britain and France in February.

“The elephant in the room was Brexit,” Ridyard said of the meeting, which was organized by the British embassy in Paris to spur more bilateral business but only served to increase her anxiety about Britain’s departure from the European Union.

“If companies are not currently looking to the UK for their products, then we will be losing out on a generation of strategic deals,” Ridyard said. “That business will be gone.”

One of the biggest concerns for manufacturers as Britain heads into crunch Brexit negotiations this year is over one of the building blocks of cross-border trade: a customs regime.

There are signs that many EU companies are holding back on using British firms in their supply chains – which can involve parts criss-crossing borders several times – because of what they still don’t know about tariffs, regulations and the potential for costly delays at the border.

Jeegar Kakkad, policy director at ADS, a British aerospace trade group, said big aviation firms were now asking British suppliers to warehouse a month’s worth of stock at their own expense, to offset the risk of Brexit border delays.

“That is going to be a significant challenge in particular for smaller companies,” he said.

Britain’s economy has slowed sharply since the Brexit vote in June 2016, but Ridyard’s firm, Produmax Ltd, is so far riding out the storm.

In its plant in Shipley, a historic manufacturing center near the northern English city of Leeds once famous for its wool and cotton mills, workers using precision milling machines and lathes turn chunks of steel and aluminum into flight-critical parts used in the flaps of plane wings.

The company, which Ridyard and her husband Jeremy bought in 1997 and employs 71 people, will soon open a second site.

However, new work recently has been in one-off jobs that other suppliers could not fulfill, not long-term strategic contracts.

“There’s no point complaining about it,” said Ridyard, the company’s financial director. “We’re still investing. But we’re just a bit more hesitant than we were.”

Employers groups say the best way to limit the impact of Brexit would be to keep the world’s sixth-biggest economy in a customs union with the EU.

Although staying in a customs union would not affect Britain’s huge services industry, it would avoid tariffs on trade in goods with the bloc and, crucially for many manufacturers who have spent years honing just-in-time schedules, it would reduce the risk of border delays.

It would also avoid the risk that a new hard border with Ireland could fuel new sectarian violence 20 years after a deal that brought peace to Northern Ireland.

Prime Minister Theresa May has ruled out the customs union option, however. Brexit campaigners, including some of May’s own ministers, object to it because it would stop Britain from striking bilateral trade deals, one of the big advantages of Brexit according to the Leave campaign in 2016.

Trade minister Liam Fox, a Leave supporter, said staying in a customs union would be a “complete sell-out” of voters.

Instead, May has proposed that Britain could collect duties on non-EU imports on behalf of the bloc, an idea dismissed as “crazy” by her own foreign minister Boris Johnson who said it would be too bureaucratic and would still restrict Britain’s ability to do deals outside the EU.

Johnson and other Leave campaigners favor a plan which they say would ease the need for border checks by using a “trusted trader” registration scheme and camera technology.

EU officials dismiss both ideas as unworkable and many manufacturers are worried there might be no customs deal at all, putting the supply chains they rely on at serious risk.

In April, Airbus Chief Executive Tom Enders said Britain had to recognize that future investments in the country were “not a given” because of the lack of clarity about Britain’s long-term trade relationship with the EU.

ADS’s Kakkad said a deal struck by London and Brussels in March to keep their trading ties unchanged until the end of 2020 was welcome, as was Britain’s intention of staying in Europe’s aviation safety agency, which could help avoid divergence in rules.

But firms were not counting on a smooth transition because it remained contingent on a broader deal being reached in the coming months, he said.

Supporters of Brexit have long argued that the declining share of Britain’s exports going to the EU – down from 54 percent in 2000 to 43 percent in 2016 – shows why it must prioritize trade deals with countries such as India, China or the United States.

But for aviation, at least, bilateral trade deals are not critical, Kakkad said.

Most civil aircraft parts carry no tariffs under a deal agreed by more than 50 countries, and the global industry follows standards that are increasingly harmonized, he said.

What matters more to them, like other British manufacturers, is the growing importance of the EU in their supply chains.

In 2014, 69 percent of British exports to the EU were goods or services used in supply chains, up from 61 percent in 2000, the Institute for Fiscal Studies think tank estimates.

More than half the EU’s exports to Britain are similarly classed as intermediate inputs, the IFS says.

For sure, Brexit has had some upsides for British companies.

More British companies plan to move production back to Britain from the EU than those intending to invest in the bloc, a survey by EEF, a manufacturing body, found.

In aviation, Brexit has spurred British firms to try to win more business from Boeing Corp. (N:) and its big U.S. suppliers to hedge against the risk of lost EU business.

But employers say the biggest issue counting against British firms when it comes to clinching EU work is the uncertainty.

A survey of supply chain managers published in March by the Chartered Institute of Procurement and Supply showed nearly one in four British firms with suppliers in the EU was struggling to secure contracts that run beyond Brexit in March 2019.

To hedge against possible barriers to work in the EU, Ridyard is looking at Britain’s oil and gas sector. Produmax’s project development manager recently attended a petroleum sector event in Aberdeen and came back with potential leads.

But unlike aviation, where contracts can run for 10 years, oil and gas work tends to be short-term and the sector’s outlook is less buoyant.

Boeing believes the market for passenger and freight planes, by contrast, will be worth $6 trillion over the next 20 years.

“Not to be able to take part in that fully as a nation is disappointing,” Ridyard said.