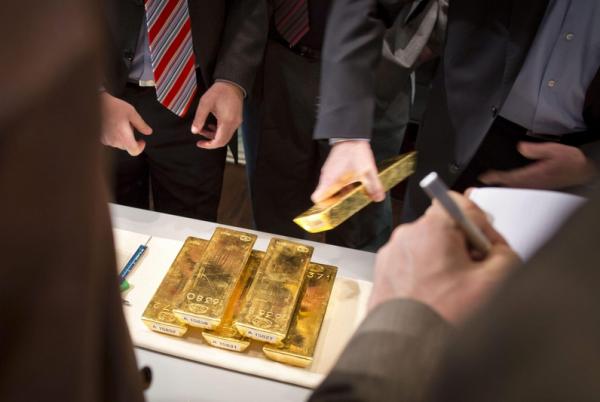 Investing.com – With gold prices continuing to mirror moves in the dollar metals traders will be turning their attention to Tuesday’s U.S. retail sales report to try to form a clearer picture of the health of the economy and the outlook for interest rates.

Alongside the retail data, markets will also be watching reports on the housing sector, manufacturing and industrial production. U.S. – China trade talks will also be in focus.

The yellow metal erased early gains on Friday to end lower, but still notched up a weekly gain as .

for June delivery settled down 0.31% at $1,318.20 on the Comex division of the New York Mercantile Exchange. The precious metal edged down as the came off the lowest levels of the day.

For the week, prices were up 0.23% after three straight weeks of declines.

The dollar hit its highest levels of the year earlier in the week, pressuring gold. A stronger U.S. currency makes gold and other dollar-denominated commodities more expensive for holders of other currencies.

The rally in the dollar ran out of steam after tame U.S. inflation data on Thursday tempered expectations for a more aggressive pace of monetary tightening by the Fed.

The Fed raised rates in March and projected two more rate hikes this year, although many investors see three hikes as possible.

Copper prices have fallen around 5.6% so far this year after hitting an almost four-year high in late 2017, but some investors see steady economic growth and longer-term supply deficits supporting prices.

Cleveland Fed President Loretta Mester is due to speak at an event in Paris.

The Reserve Bank of Australia is to publish the minutes of its latest policy setting meeting.

China is to release data on fixed asset investment and industrial production.

The UK is to publish its latest employment report.

The euro zone is to release preliminary data on first quarter economic growth.

The ZEW Institute is to report on German economic sentiment.

The U.S. is to produce data on retail sales and manufacturing activity in the New York region.

Australia is to report on wage price inflation.

The euro zone is to publish revised inflation figures.

ECB President Mario Draghi is to speak at an event in Frankfurt.

The U.S. is to release data on building permits, housing starts and industrial production.

Australia is to publish its latest employment report.

The U.S. is to release the weekly jobless claims report along with data on manufacturing activity in the Philadelphia region.

Canada is to round up the week with data on inflation and retail sales.