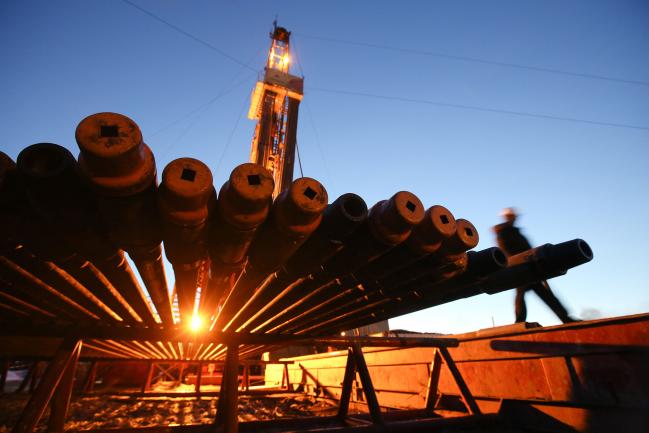 © Bloomberg. A worker passes an illuminated oil drilling rig and drill pipes, operated by Rosneft PJSC, in the Samotlor oilfield near Nizhnevartovsk, Russia, on Tuesday, March 21, 2017. Russia’s largest oil field, so far past its prime that it now pumps almost 20 times more water than crude, could be on the verge of gushing profits again for Rosneft PJSC. Photographer: Andrey Rudakov/Bloomberg

(Bloomberg) — Oil rose to $80 a barrel in London for the first time since 2014 as inventories fell and traders braced for the impact of renewed sanctions on OPEC member Iran.

has rallied this month to the highest level in more than three years after U.S. President Donald Trump withdrew from a 2015 pact between Iran and world powers that had eased sanctions on the Islamic Republic in exchange for curbs on its nuclear program. While the International Energy Agency said a global glut’s been eliminated thanks to output curbs by OPEC, it warned high prices may hurt consumption and cut forecasts for demand growth.

“Supply concerns are top of mind after the U.S. left the Iran nuclear deal,” said Norbert Ruecker, head of macro and commodity research at Julius Baer Group Ltd. in Zurich. “The geopolitical noise and escalation fears are here to stay.”

West Texas Intermediate crude for June delivery traded at $72.13 a barrel on the New York Mercantile Exchange, up 64 cents. The contract climbed 18 cents, or 0.3 percent, to $71.49 on Wednesday. Total volume traded was 33 percent above the 100-day average.

Futures for September delivery on the Shanghai International Energy Exchange gained 1.9 percent to 481.9 yuan a barrel, rising for a third day.

Members of the Organization of Petroleum Exporting Countries, including Saudi Arabia, Kuwait and the United Arab Emirates, said they have enough capacity to fill in any supply gap if renewed sanctions curtail Iran’s exports. Still, Goldman Sachs said the group won’t proactively replace the lost barrels, given its current narrative that the market isn’t fully re-balanced.

Even the U.S. won’t be able to offset Iran’s shipments because shale producers are facing “growing pains” as record production has caused bottlenecks in the nation’s pipelines, Goldman analysts including Jeffrey Currie wrote in a May 16 note.