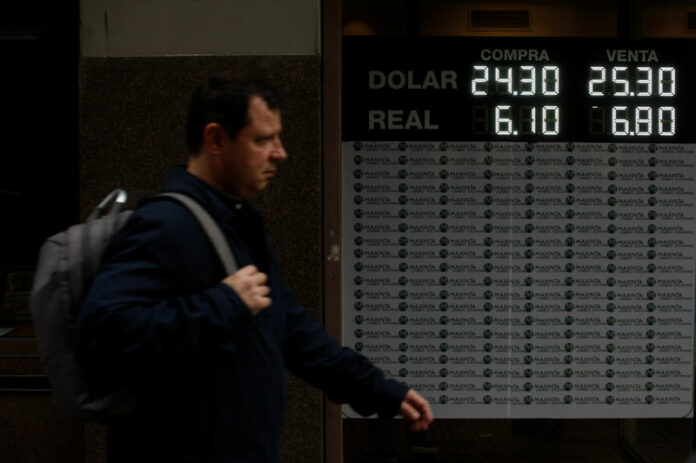 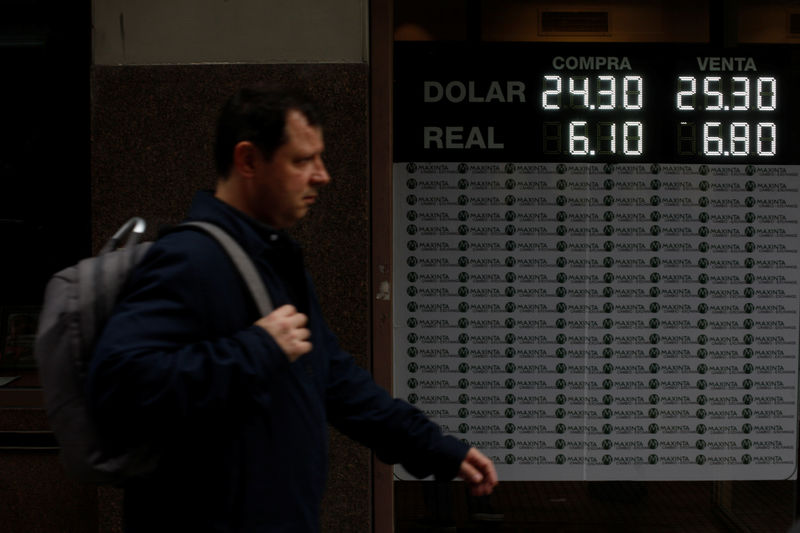 © Reuters. A man walks by an electronic board showing currency exchange rates in Buenos Aires

By Hugh Bronstein and Jorge Otaola

BUENOS AIRES (Reuters) – Argentina’s peso stabilized on Thursday as the central bank declined for the second day in a row to support the local currency by selling dollars, indicating its willingness to let the market find its own level under 25 to the U.S. dollar.

The peso, in line with currencies around the region, slipped 0.2 percent to 24.3 per greenback a day after President Mauricio Macri declared the run on the peso to be over and sent an olive branch to the bond market by vowing to speed up his deficit cutting effort. Wall Street applauded the moves.

Wednesday and Thursday were the first trading session since May 9 in which the bank did not sell reserves to prop up the peso, which has weakened about 16 percent this month.

The central bank offered to sell $5 billion at 25 pesos per dollar on Thursday, but the local currency did not approach that level during the session. Chief monetary policymaker Federico Sturzenegger established a floor for the peso on Wednesday when he said 25 to the dollar would be “out of scale.”

The peso hit a series of all-time lows earlier in the month, forcing the president to request a “high access stand-by arrangement” from the International Monetary Fund (IMF) last week.

It was one of several moves by Macri to bolster confidence after weeks of volatility sparked by a new tax on foreign investors, weak fundamentals, including 25 percent inflation and worries about financial fallout from a drought that has walloped the harvest of Argentina’s main cash crop, soy.

The IMF deal may include tough limits on government spending after what Macri called his “gradualist” approach to reform failed to halt the peso’s slide.

Earlier this month, the government cut its 2018 fiscal deficit goal to 2.7 percent of gross domestic product from 3.2 percent previously. But that in itself was not enough to keep the peso from tumbling.

Rather than opt for full bore budget slashing, Macri was more likely to open a period of “accelerated gradualism,” said Alberto Bernal, chief strategist at XP Securities. “I’m still very bullish on this story,” he said in an email.

“The main points ahead are the details of the arrangement with the IMF,” said Gabriel Zelpo, chief economist at local consultancy Elypsis, who estimates the government needs about $33 billion from the multilateral lender over the coming year.

“We estimate that a good arrangement with the IMF should be of about that size,” Zelpo said. “Investors are waiting to see how intense the fiscal reduction requirement will be and, most important, what the size of the credit package will be.”

Those details will be “developed in the coming days,” an IMF official told reporters in Washington on Thursday. An IMF board meeting on Argentina is scheduled for Friday.

Resorting to the IMF is politically sensitive for Macri, who is expected to run for re-election next year. Many Argentines believe it was IMF policies that set the stage for the country’s 2001/02 economic meltdown, which tossed millions of middle class Argentines into poverty.

Protests against Macri’s deficit-cutting program and his decision to engage with the IMF are being held daily, blocking streets in capital Buenos Aires.