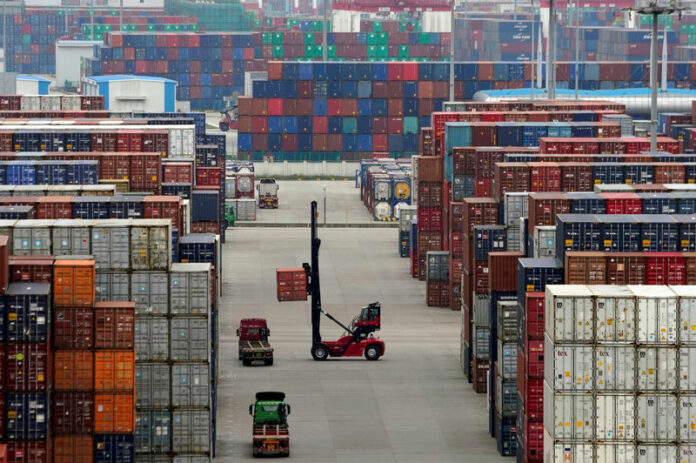 By Ben Blanchard and Michael Martina

BEIJING (Reuters) – China on Monday praised a significant dialing back of trade tension with the United States, with the government saying agreement was in the interests of both countries while state media trumpeted what it saw as China’s refusal to surrender.

The cooling of tension elicited mixed reactions from U.S. business leaders dealing with China, with some happy to see the prospect of damaging tariffs fade, while others said it would be difficult for Washington to rebuild momentum to address what they see as troubling Chinese policies.

A trade war was “on hold” after the world’s largest economies agreed to drop their tariff threats while they work on a wider trade agreement, U.S. Treasury Secretary Steven Mnuchin said on Sunday.

The previous day, Beijing and Washington said they would keep talking about measures under which China would import more energy and agricultural commodities from the United States to narrow the $335 billion annual U.S. goods and services trade deficit with China.

Speaking at a daily briefing, Chinese foreign ministry spokesman Lu Kang said both countries had clearly recognized that the reaching of a consensus was good for all.

“China has never hoped for any tensions between China and the United States, in the trade or other arenas,” Lu said.

But Chinese media was also quick to point out how the country had successfully defended its interests.

Mei Xinyu, a commerce ministry researcher, wrote on the WeChat account of the overseas edition of the ruling Communist Party’s official People’s Daily that the agreement preserved China’s right to develop its economy as it sees fit, including moving up the value chain.

The deal also focused on China’s “positive position” to increase imports rather than a “negative position” of getting it to cut exports, Mei said.

The official China Daily said everyone could heave a sigh of relief at the ratcheting down of the rhetoric, and cited China’s chief negotiator, Vice Premier Liu He, as saying the talks had proved to be “positive, pragmatic, constructive and productive”.

“Despite all the pressure, China didn’t ‘fold’, as U.S. President Donald Trump observed. Instead, it stood firm and continually expressed its willingness to talk,” the English-language newspaper said in an editorial.

“That the U.S. finally shared this willingness, means the two sides have successfully averted the head-on confrontation that at one point seemed inevitable”, it said.

During an initial round of talks this month in Beijing, the United States demanded that China reduce its trade surplus by $200 billion. No dollar figure was cited in the countries’ joint statement on Saturday.

Some in U.S. business groups who had been pushing for tougher measures to pressure China to ease long-standing market barriers on U.S. companies expressed disappointment.

James Zimmerman, a Beijing-based lawyer and a former chairman of the American Chamber of Commerce in China, said the Trump administration’s move to walk back its threatened trade actions was premature, and a “lost opportunity” for American companies, workers and consumers.

“The Chinese are in a state of quiet glee knowing that Trump’s trade team backed off on sanctions without getting any real and meaningful concessions out of Beijing,” Zimmerman said.

But Jacob Parker, vice president of China operations at the U.S.-China Business Council, called the apparent de-escalation in trade tension “a great bit of progress”.

“We were never supportive of tariffs, so any actions that can be taken to stop those from being implemented are positive from our view,” Parker told Reuters.

Goldman Sachs (NYSE:) noted the lack of specifics in statements by U.S. and Chinese officials, which it viewed mainly as evidence that both sides wanted to continue talking.

“We do not rule out the possibility that the Chinese team offered some tangible concessions which helped the progress of the talks, but as other aspects of an agreement are still in flux, has avoided stating these offers in public,” Goldman Sachs wrote in a research note.

Some analysts in Beijing warned that trade tension would persist, and that China should prepare for more action on trade from the Trump administration.

“We should not be blindly optimistic,” Shi Yinhong, an expert on China-U.S. relations at Renmin University said at a forum on Sunday after the trade agreement was announced.

“Blind optimism (could lead to) China losing at this crossroads.”

Shi, who has advised the government on diplomatic issues, said China could accept a lower trade surplus and reduce its market entry barriers, but would not compromise on its industrial policy.

The ruling Communist Party’s People’s Daily said that in the energy and agriculture sectors the two countries had obvious synergies, with the United States having the capacity to satisfy the massive Chinese market.

“The ballast stone of Sino-U.S. ties are an equal and mutually beneficial trade and business relationship. Its essence is win-win cooperation,” it said.

But China was not being forced to increase imports as a way to ward off the trade tensions or because the country had submitted to outside pressure, the newspaper said in a commentary.

China will naturally need to import more to satisfy demand from its increasingly affluent consumers, the newspaper wrote.

“Trade wars have no winners,” it added in the commentary, published under the pen name “Zhong Sheng”, meaning “Voice of China”, used to give the paper’s view on foreign policy issues.