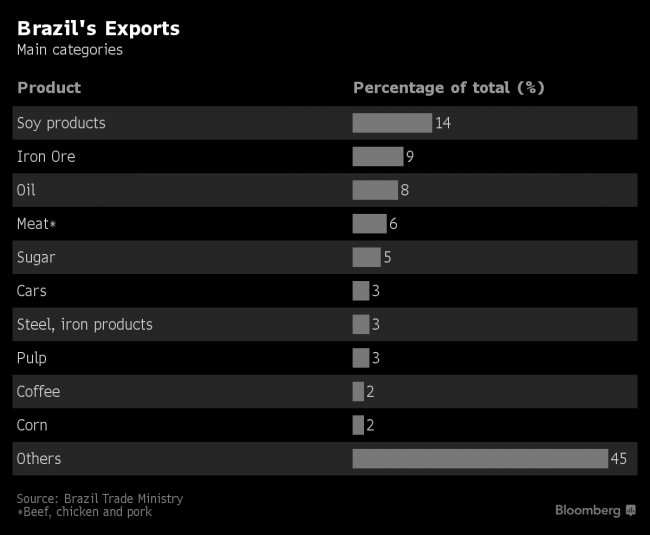 (Bloomberg) — An eight-day-old strike by Brazilian truck drivers is beginning to affect global commodity markets as soybean traders delay shipments and the country’s vast sugar industry shuts down more of its processing plants.

While many blockades have been lifted and the government has signed decrees aimed at getting the truckers back to work, the protests continued on Monday, and many of Brazil’s businesses and public schools remained shut.

Chinese food giant Cofco International temporarily suspended soybean shipments from Santos, Brazil’s largest port, because of a shortage of cargoes for export, according to people with direct knowledge of the matter. The company doesn’t have enough of the oilseed to fill a vessel expected to dock on Monday, said one of the people, who asked not to identified because the information hasn’t been published. A Cofco spokesman declined to comment on the disruption.

Brazil is the world’s largest soybean exporter and its supplies have assumed an even greater importance in recent weeks after China, the biggest buyer, threatened to impose tariffs on supplies from the U.S., the second-largest shipper. Delays to Brazilian exports may encourage Chinese importers to take more U.S. beans.

Other soy exporters at Santos used inventories over the weekend to keep shipments moving but the amount now remaining is very low, the people said. Archer-Daniels-Midland Co., another major processor of soybeans, said May 25 it had halted or slowed some operations after running out of storage space.

As a result of sluggish shipments, the number of vessels waiting to dock in Santos increased to 18 on May 25 from 10 on May 21, when the strike began, according to data from shipping agency Williams. The flow of trucks to the port was still halted Monday and the delivery of goods to export terminals has been reduced as a result, according to the port authority.

In Paranagua Port, the second-largest in Brazil for grain shipments, five vessels that were supposed to carry about 300,000 tons of soy meal haven’t been able to sail in the past seven days because there’s not enough of the commodity to load them, a press official from the port authority said Monday.

Another three vessels slated to transport pulp and sugar also failed to depart from the port because of a shortage of supplies. Soybean shipments from Paranagua haven’t been affected so far as exporters have used inventories stored at the port’s terminals.

Coffee shipments are halted at most Brazilian port terminals, Nelson Carvalhaes, president of exporters group CeCafe, told reporters. Plants that supply soybean oil, biodiesel and orange juice plants have also had their operations suspended, as their warehouses are full.

Brazil is home to the world’s largest sugar industry, and most of its mills have halted sugar-cane harvesting amid a lack of fuel. All plants and cane suppliers in Sao Paulo state will suspend operations until May 29 amid a shortage of diesel, according to industry group Unica.

Biosev SA, the Louis Dreyfus Co. unit that’s Brazil’s second-biggest sugar producer, said it suspended operations at two cane mills, and others will run out of fuel in the next two days. Cane processing in the Center-South region may be cut by 10.9 million tons in the second half of May because of the strike, INTL FCStone Inc. said Monday in a report.

JBS, the world’s largest meat company, has halted all domestic slaughtering of cattle, hogs and chicken because it can’t get product to customers nor receive deliveries of feed, according to a person familiar with the matter.

“Beef production levels in Brazil are now close to zero,” Hyberville Neto, an analyst at Scot consultancy, said in a telephone interview. “The cattle market has been completed frozen since Thursday.”

Meat exporters’ group ABPA said supplies of animal feed to chicken producers will gradually return to normal in the next few days. Its members have requested police protection for a planned convoy to transport meat products to Paranagua for export.