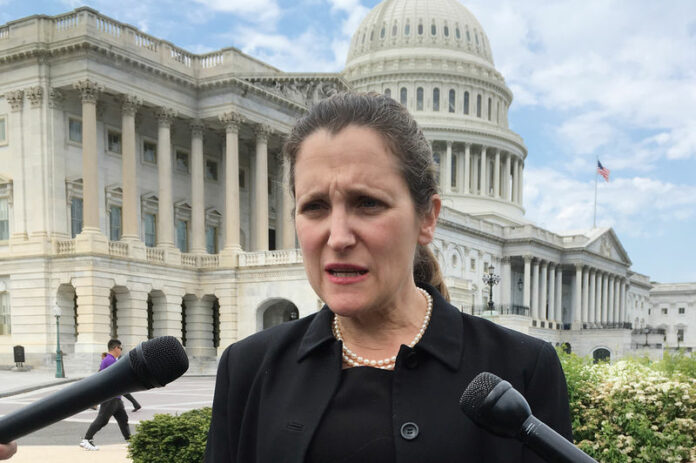 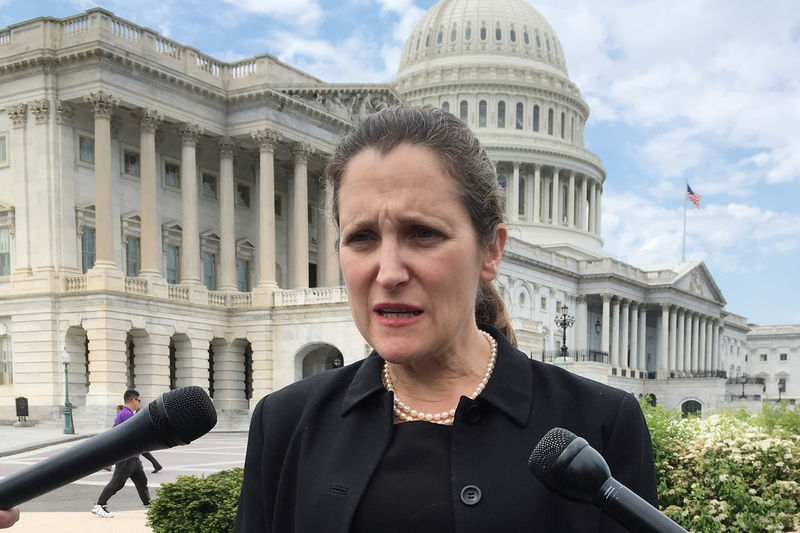 Speaking to reporters after meeting with U.S. Trade Representative Robert Lighthizer in Washington, Freeland said they discussed Friday’s expiration of a temporary exemption for Canada and Mexico from U.S. national security tariffs on steel and aluminum imports.

Freeland repeated her view that the metals tariff issue was “entirely separate” from negotiations to revamp the North American Free Trade Agreement and that quotas or tariffs for Canada based on national security concerns were “entirely inappropriate” given the high level of security cooperation and steel industry integration between the United States and Canada.

She declined to say, however, whether she expected President Donald Trump’s administration to extend the exemption or impose tariffs of 25 percent on steel imports from Canada and 10 percent on aluminum.

Asked if Canada were prepared to retaliate should Washington impose the tariffs, Freeland said: “Our government always is very ready and very prepared to respond appropriately to every action. We are always prepared and ready to defend our workers and our industries.”

Freeland also said she had held “very productive discussions” with Lighthizer on NAFTA rules of origin for autos, as well as other issues, but did not offer specifics.

The NAFTA talks have been hung up on disagreement over a U.S. proposal to boost regional value content requirements for North American-built motor vehicles to 75 percent from 62.5 percent currently, with 40 percent coming from areas paying average wages of $16 an hour.

“There is definitely a path forward and we are making progress,” Freeland said.

Mexican Economy Minister Ildefonso Guajardo did not travel to Washington, but Freeland said she had been in contact with him frequently in recent days.

Canadian Prime Minister Justin Trudeau told Bloomberg Television in Toronto that he had made clear to Trump that “no NAFTA is better than a bad deal.”

“We are their (the Americans’) number one customer and there is no question that any disruption of that flow of goods, yes, would be terrible for the Canadian economy but would also be pretty terrible for a lot of U.S. jobs,” Trudeau said.