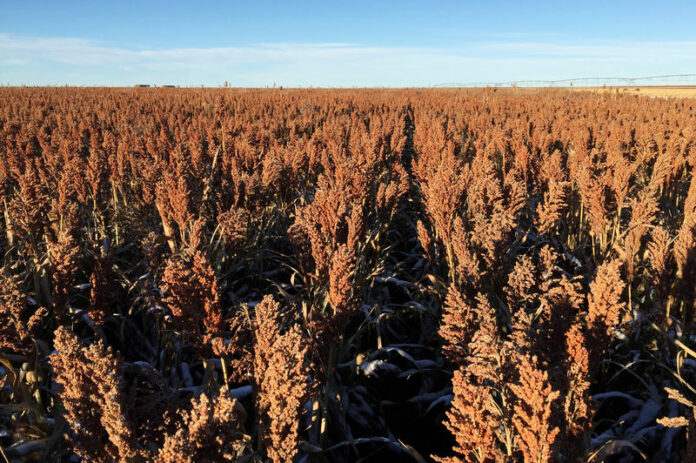 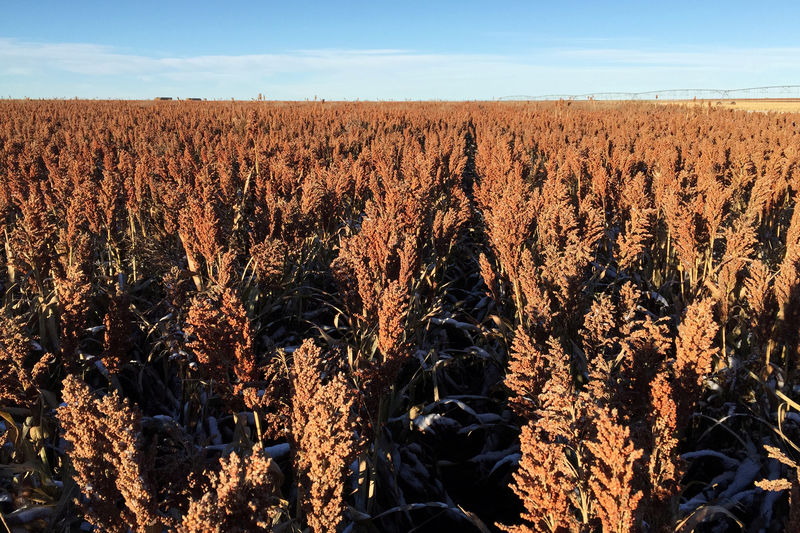 © Reuters. FILE PHOTO: A field of sorghum (milo) grain at a farm outside of Texhoma Oklahoma

By Tom Polansek and Karl Plume

CHICAGO (Reuters) – Chinese grain merchants seeking to resume purchases of U.S. sorghum after an anti-dumping probe by Beijing that had halted trade between the world’s biggest buyer and seller of the grain are now finding supplies tight, according to dealers.

Importers in China have been calling U.S. traders to check on prices and availability since Beijing dropped its months-long investigation on May 17, but much of their would-be shipments of sorghum were sold to other countries along with U.S. ethanol makers during the trade spat, the dealers said.

As part of the probe, Beijing had slapped a hefty deposit on U.S. sorghum imports in April, raising the costs for its buyers and sending benchmark prices spiraling lower.

The decline of available supplies now shows how the trade dispute between the two biggest economies has created challenges for Chinese companies that want to purchase U.S. sorghum to feed livestock and make a fiery liquor called baijiu.

“Certainly those buyers had spoken for a lot of U.S. sorghum that ended up in other countries and they did not get it,” said Tim Lust, chief executive of National Sorghum Producers, a U.S. industry association. “I know they have a desire to get back into the market when it is available.”

U.S. sorghum supplies are set to remain tight until this autumn, when U.S. Plains states such as Kansas harvest their crops, traders said.

But even those harvests will likely be hurt by the trade conflict. Some U.S. farmers said they scrapped plans to plant sorghum, choosing corn instead, because China’s probe had hurt prices.

(For a graphic on U.S. sorghum prices, click on: https://tmsnrt.rs/2s8Pyer)

A drought is also expected to reduce the crop by 40 percent to 60 percent in Texas, where farmers will start harvesting in June.

“There’s not a ton of physical supply to be shipped immediately,” Lust said. “But there’s a lot of discussions about new crop to be shipped when it starts coming off.”

“Now we don’t really have the inventory to sell,” he said. “We’re waiting on a crop.”

U.S. sorghum supplies as of March 1 totaled 138.273 million bushels, the lowest in three years, according to the U.S. Department of Agriculture. Farmers had already been reducing plantings in recent years due in part to lackluster Chinese demand.

Since China dropped the probe, prices for the grain have spiked about 80 cents, with basis bids at around 40 cents a bushel above Chicago Board of Trade December corn

Bids for immediate deliveries of sorghum to Corpus Christi, Texas

Bids for deliveries in July

“Farmers have got good prices right now, but they’re not letting go of anything,” said Guy Brady, president of Vista Exports Corp in Houston, which buys grain from farmers that is later exported. “They’re reading all this bullish stuff on China so they think the market’s going to keep going up.”

Beijing’s temporary requirement for deposits on imports of U.S. sorghum has also left U.S. sellers and Chinese buyers nervous about striking major new deals because of the potential for another disruption in trade, traders said.

ADM has said it will take a $30 million hit to its trading profit in the second quarter due to the trade dispute over sorghum.

“We can’t buy it and we’re afraid to sell it,” Brady said. “There’s still a lot of uncertainty.”