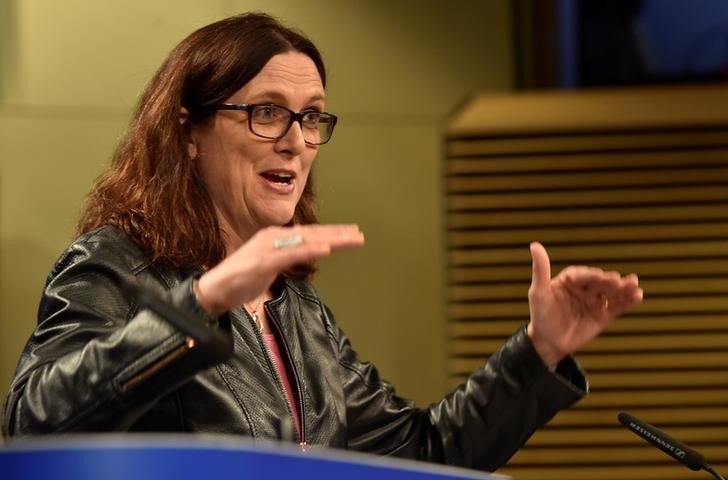 STRASBOURG (Reuters) – European Trade Commissioner Cecilia Malmstrom said on Tuesday she expected the United States to set a limit on steel and aluminum coming from Europe even if it decides not to impose import duties.

U.S. President Trump has set import tariffs of 25 percent on steel and 10 percent on aluminum, but granted temporary exemptions to the European Union, as well as Canada and Mexico. These exemptions expire on Friday.

“Realistically, if the U.S. decides to refrain from applying duties I expect them nonetheless to want to impose some sort of cap on EU exports,” Malmstrom told lawmakers in the European Parliament.

Malmstrom said it was not clear whether Washington would opt for a “hard cap” with an absolute maximum import volume or a “soft cap”, under which further exports would be allowed but then subject to duties.

“A soft cap of this nature would be less damaging than a strict hard cap,” she said, adding that the volume and how the system was managed would also be important factors.

The European Commission has previously said it that, if the United States went ahead with tariffs on EU metals, then it would apply its own duties on 2.8 billion euros ($3.2 billion) of U.S. goods, including motorbikes and whisky.

Malmstrom said on Tuesday that it would still prepare counter-measures if Washington set quotas on EU exports, although these would probably be at a lower level. It would also launch legal action at the World Trade Organization.

The Commissioner, who will meet U.S. Commerce Secretary Wilbur Ross and Trade Representative Robert Lighthizer in Paris on Wednesday, said she hoped to report back with good news – no tariffs and no quotas.

“But realistically I don’t think we can hope for that,” she said.