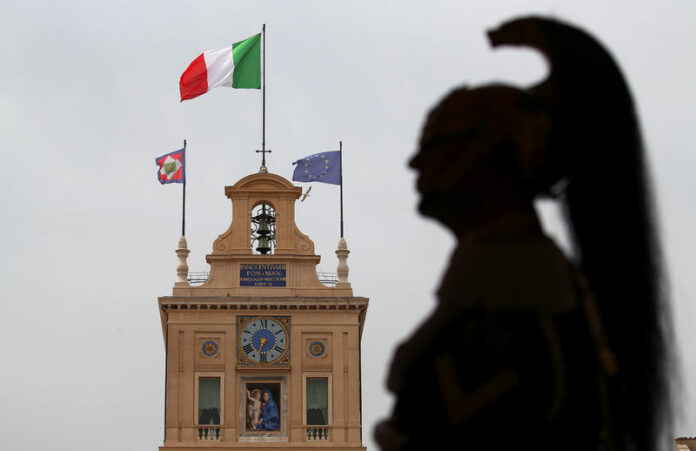 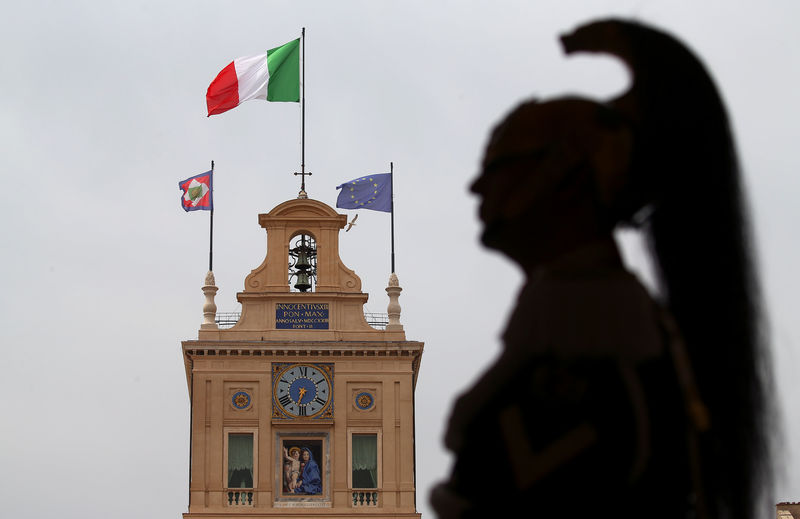 © Reuters. A member of the Italian elite military unit Cuirassiers’ Regiment, who are honour guards for the Italian president, stands guard inside the Qurinal palace before Carlo Cottarelli meeting with Italy’s President Sergio Mattarella at the Quirinal Palace in Ro

By Philip Pullella and Mark Bendeich

ROME (Reuters) – Italy’s central bank chief warned on Tuesday that the state was “only ever a few short steps” from losing investors’ trust as markets dumped stocks and bonds, fearing repeat elections will become a de facto referendum on the country’s euro membership.

Prime minister-designate Carlo Cottarelli is set to unveil his cabinet on Tuesday – he will meet President Sergio Mattarella at 1430 GMT – as tensions between the head of state and the two political parties he sidelined flared.

Cottarelli, a former International Monetary Fund official who Mattarella chose on Monday to head a stop-gap government leading to early elections, was due to meet the head of state in the afternoon.

The anti-establishment 5-Star Movement and the far-right League, the biggest winners from inconclusive elections in March, abandoned plans to form a coalition government at the weekend after Mattarella vetoed their choice for economy minister, an 81-year-old who has argued for Italy to leave the euro.

Investors believe that Cottarelli, 64, will fail to muster support to pass a budget, leading to repeat elections in the autumn when the two eurosceptic parties could return with even stronger representation in parliament.

A new poll by the SWG organization showed support for the League had jumped to 27.5 percent, up about 10 points from the March 4 elections. While the 5-Star would fall about three points to 29.5 percent, the two combined would have a 57 percent majority in parliament if they decide to join forces again.

Such worries sent Italian stocks to their lowest level since July 2017, dragged down by a selloff in the shares of banks – many of which have invested heavily in the Italian government debt that is now falling sharply in value.

This selloff pushed up yields on the debt. Those on two-year bonds, the most sensitive to political upsets, were set for their biggest one-day jump in 26 years. [GVD/EUR]

The continuing uncertainty in the euro zone’s third biggest economy also helped the euro tumble to fresh multi-month lows. Investors had already worried about the proposed coalition’s ambitious spending program for a country which already has the third highest public debt in the world – plans that were likely to bring it into conflict with the European Union.

Bank of Italy chief Ignazio Visco said any move to weaken the country’s public finances could undermine confidence and years of valuable reforms.

Italy’s high debt as a proportion of its annual economic output could expose it to dangerous crises of confidence, he told the central bank’s annual meeting.

Visco acknowledged the selloff was very serious but questioned its economic basis. “There are no justifications — except for emotions — for what we’re seeing today on the markets,” he said.

The number of investors expecting the euro zone to lose at least one member state in the coming months has increased due to the crisis in Italy, a survey showed on Tuesday.

The Sentix research group said its monthly “euro break-up” index, based on a survey of around 1,000 institutional and retail investors, more than doubled to 13 percent from 6.3 percent in April.

Something similar might soon also be required, said Saxo Bank’s head of foreign exchange strategy John Hardy. “If this continues for another couple of sessions I think you will have to see some official (European) response. A ‘whatever it takes’ kind of moment,” he said.

The ECB’s outgoing vice president Vitor Constancio stressed that any help for Italy, should it run into liquidity problems, must meet the bank’s mandate and “certain conditions”.

“Italy knows the rules. They might want to read them again,” Constancio told Spiegel magazine in an interview, according to a pre-release.

The ECB’s never-used emergency bond buying scheme — known as Outright Monetary Transactions or OMT — is a potential tool to help Italy but comes with a long list of conditions.

While 10-year Italian bond yields have soared to over 3 percent recent days, they are well below the six percent reached when Draghi pledged to do “whatever it takes” to preserve the euro.

Cottarelli, whose simplicity startled reporters on Monday when he arrived at the presidential palace by taxi carrying a backpack and pulling his trolley bag, was preparing a slimed-down cabinet of experts with no direct links to political parties to steer the country to elections.

Both parties planning the failed coalition were infuriated by Mattarella’s veto, accusing him of violating democratic principles.

The 5-Star leader, Luigi Di Maio, called on parliament to impeach Mattarella, which would be unprecedented in Italy’s post-World War Two history. The party is planning big street protests against the president on Saturday.

5-Star members took to the streets holding anti-Mattarella placards such as “Sovereignty Belongs to the People”, while the president’s supporters went on Twitter with the hashtag “I stand with Mattarella”.