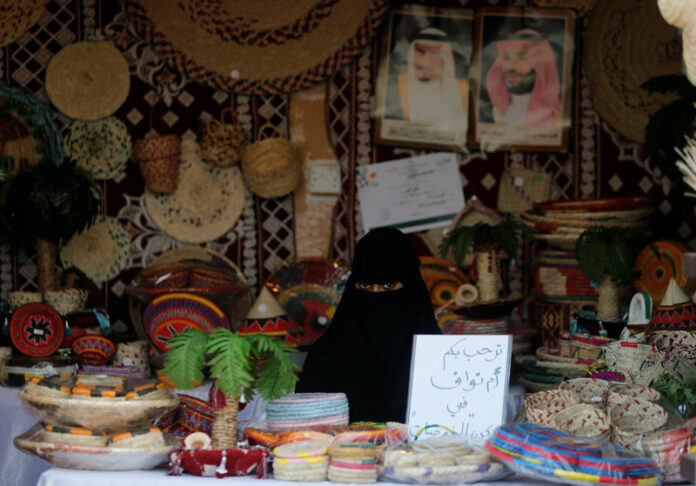 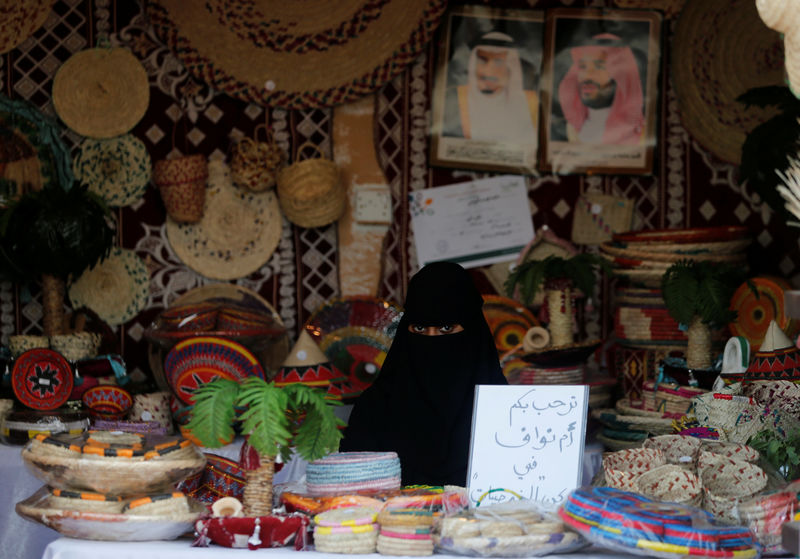 RIYADH (Reuters) – Nouf al-Anzy’s new life shows how Saudi Arabia’s social reforms are helping its struggling economy. Six months ago she got her first job, one of tens of thousands of women to do so as the government tackles prejudice against female employment.

The 22-year-old high school graduate earns 4,000 riyals ($1,067) a month as a supermarket cashier in central Riyadh. Her family initially objected but now approves, and the income from the job has been transformative.

“I have good money every month and I am not married and have no obligations. I can go to the cinemas, go shopping, dine out, and take computer and English courses to improve myself,” she said. “I also plan to buy a car to drive.”

Consumer spending by newly employed women like al-Anzy is helping to offset a huge drag on growth from measures to bolster state finances and an exodus of foreign workers.

The extent to which the economy can pick up over the next two years after shrinking last year for the first time since 2009 may depend largely on how much female empowerment and other social reforms can contribute.

Two years after it launched an economic reform programme to cut reliance on oil exports, Saudi Arabia has little to show for it. Plans to spur private investment in new non-oil industries, from shipbuilding to robotics, have barely got off the ground, partly because of red tape and legal uncertainties.

Bank loans to private firms have shrunk from a year earlier for 13 straight months, dampened by taxes and fees levied to cut the state budget deficit. Growth in private business activity is the slowest since August 2009, a corporate survey shows.

But social reforms introduced by Crown Prince Mohammed bin Salman alongside the economic steps are underway, and for the next few years at least, they may have more of a positive impact on business than Riyadh’s ambitious investment plans.

Many of the measures have business implications.

Plans for tourist visas will boost the leisure sector, curbs on the power of the religious police may help restaurants by enabling the sexes to mingle over meals out and the economy could also benefit from education and court reform.

“Women entering the workforce is really a strong tailwind for the economy,” he said, noting that a typical Saudi family could more than double its income if the wife and some of her unmarried daughters chose to work.

Measuring the impact on the wider economy is not easy: plans to lift a ban on women driving, which the government says will happen in late June, are a case in point.

In the long run, allowing women to drive will spur industries such as auto parts, auto insurance and by improving the mobility of families, even housing, Alagil predicted.

Over the shorter term, the lifting of the ban on women driving may put tens of thousands of foreign chauffeurs out of work, accelerating a drop in immigrant workers which has hurt the economy.

Last month, a ban on cinemas was lifted, part of a campaign to alter conservative social customs and encourage Saudis who sought entertainment abroad to spend on it at home.

Multi-billion dollar, state-invested projects, such as a theme park area near Riyadh and a vast complex of resorts on the Red Sea, will take years to develop and have uncertain commercial prospects.

But a state-backed firm is also creating the infrastructure for entertainment districts in over a dozen Saudi cities, to house smaller private businesses that could be established quickly.

These may include scores of cinema screens, venues for public performances, restaurants and retail space, becoming new centers for economic activity in metropolitan areas.

Mazen al-Sudairi, head of research at Al Rajhi Capital, estimated spending on entertainment — recreation, culture, restaurants and hotels — at 8 percent of household spending. That equates to $20 billion a year, a sign of its potential.

Weighing against any increased revenue from entertainment is the departure of many foreign workers due to the economic slump, rising fees for work permits and government orders to businesses not to employ them.

The number of foreigners employed in Saudi Arabia shrank by over 466,000 from a year earlier to 10.42 million in 2017; more than half of that decline occurred in the fourth quarter.

Employers complain it is often hard, and more expensive, to find trained Saudis who can substitute for departing foreign workers, even in areas such as the restaurant trade.

Customary gender segregation in most workplaces still limits the ways in which women can be employed, and the government has not committed itself to ending the practice, though it promises “relaxed social norms” in some of its new economic zones.

Nevertheless, state resources are being ploughed into getting women to work, including a 9,000 riyal per year child care grant and an 800 riyal per month transport allowance.

Khalid Alkhudair, managing director of Glowork, a women’s recruitment agency in Riyadh, said the formal listing of female employment as an objective of the government’s social reforms meant companies could no longer ignore it.

“Now every major company is being incentivised to consider the issue and make a plan. Organizations have a path laid out for them.”

Demographics are in favor of the trend, he added. The female participation rate in the economy is now about 19 percent; doubling that ratio would put a million more women to work, while still leaving Saudi Arabia well below rates of about 55 percent seen in many Western nations.

(For graphic on Saudi spending, revenue and reserves, click: https://tmsnrt.rs/2jzOkUF)