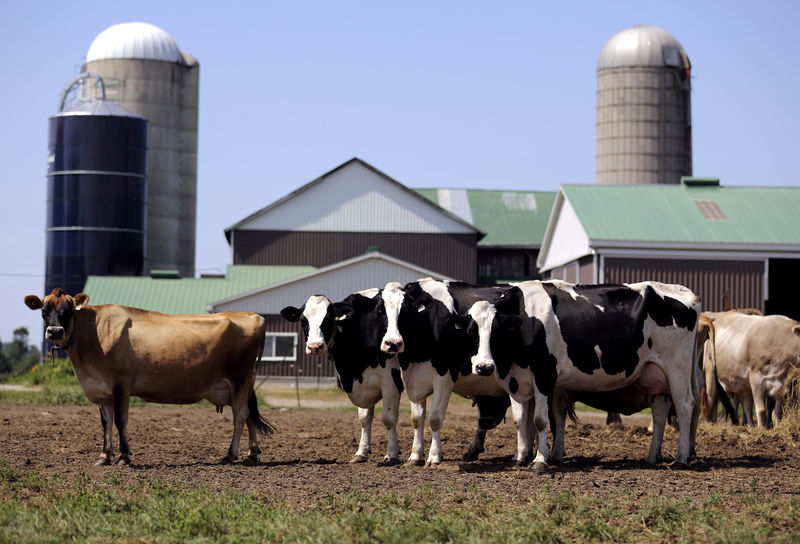 By Rod Nickel and Julie Ingwersen

The sector, worth C$21 billion ($16.2 billion) in farm and processed dairy shipment sales, is the target of blistering verbal attacks and Twitter posts from Trump who complains that Canada’s tariffs, as high as 314 percent, are unfair to the United States.

Dairy has emerged as the latest flashpoint between the U.S. and Canada as they renegotiate the 1994 North American Free Trade Agreement. Trump’s attacks accelerated leading up to the weekend Group of Seven summit in Quebec, which ended with Trump withdrawing U.S. support for the G7’s communique and criticizing Prime Minister Justin Trudeau.

Dairy “should be off the table for these negotiations,” David Wiens, a Manitoba dairy farmer and vice-president of Dairy Farmers of Canada (DFC) said of NAFTA talks.

In recent trade deals with the European Union and a group of Asia-Pacific nations, Canada conceded larger tariff-free dairy quotas.

But the DFC’s stance that it is unwilling to support more concessions may not be reaching politicians.

Trudeau last week said in a U.S. television interview that Canada had “flexibility” on dairy, while U.S. Agriculture Secretary Sonny Perdue told U.S. Farm Report that Canada offered dairy concessions that were insufficient. Trudeau was scheduled to meet with DFC on Monday.

Ten percent of the Canadian dairy market is open to imports, with the rest effectively blocked by massive tariffs. Since the 1970s, Canada has controlled supplies of dairy, poultry and eggs to match domestic consumption, and prices are set by a government corporation and provincial boards.

The DFC’s Wiens said giving up further market share would “make it very difficult for us to continue the growth and investment we’ve seen in the past several years. Opening to the U.S. market would be devastating.”

Processors and farmers would be less likely to modernize operations, Wiens said.

With enough concessions, the value of farmers’ production quotas, worth about C$25,000 per cow, could fall as other countries gain market share, said Mike Gifford, a retired government official who was Canada’s agriculture trade negotiator on NAFTA.

Canada will have to make dairy concessions to get a U.S. trade deal, but it does not have to mean dismantling supply management, Gifford said.

“If you’re a negotiator you have to know what’s sensitive for the other guy and what does the other guy need to get in order to say there’s a win-win outcome,” Gifford said.

The United States has its own protected sectors, such as sugar. Dairy is sensitive because the United States produces too much milk for a saturated global market, DFC president Pierre Lampron said in a statement.

The U.S. is not seeking dismantlement of supply management, just greater access and the end of a Canadian system of pricing milk protein ingredients that is undercutting global prices, said Tom Vilsack, chief executive of the U.S. Dairy Export Council and a former U.S. Agriculture Secretary.

But Gregg Doud, the chief agricultural negotiator in the Office of the United States Trade Representative, told Reuters on Thursday that the U.S. has “very serious concerns about the subsidies and the structure of Canada’s dairy industry.”