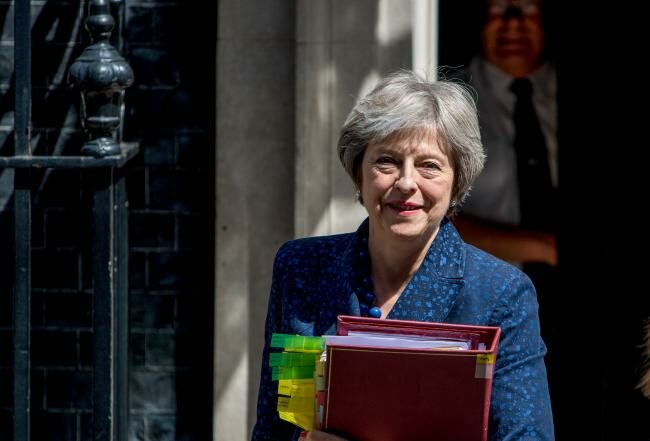 May Edges Toward Brexit Bill Compromise to See Off Rebellion 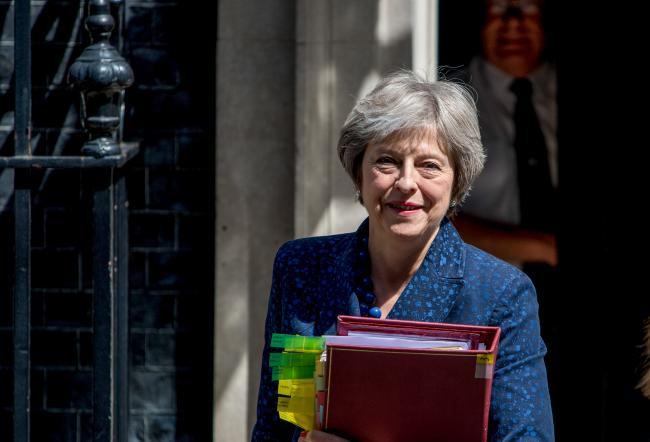 (Bloomberg) — Theresa May’s government is in advanced talks to head off a rebellion by pro-European members of her Conservative Party, edging toward a deal on Brexit that could hold her divided party together through a week of perilous voting.

Brexit Secretary David Davis gave his backing to a compromise amendment on customs arrangements with the EU late Monday, according to a person familiar with the talks, but it wasn’t yet clear that the government had managed to see off all possible challenges from its own ranks. May’s landmark Brexit legislation goes to Parliament on Tuesday and Wednesday and rebels had been plotting to defeat her and force her to maintain closer trading ties to the bloc.

An agreement is being hashed out that could see the government backing an amendment calling for the U.K. to have a customs “arrangement” with the EU after the split, according to Brexit Minister Steve Baker. Leading Conservatives on both ends of the Brexit spectrum said they are ready to back the wording, which sounds vague enough to please everybody and the official said that Davis will put his name to it.

If a deal is agreed it’s a major relief for May, buying her time and showing that she is capable of uniting her party behind her vision for Brexit, if only temporarily. May faces pro-EU rebels on one side and pro-Brexit campaigners on the other and both potentially have the power to oust her.

May’s position has been looking increasingly precarious, leading some pro-EU rebels to hint late last week that they didn’t want to risk destabilizing her further. They fear that if she goes, a Brexit hardliner could take over.

The prime minister spoke to lawmakers in Parliament on Monday evening at a dramatic meeting where loud cheers and foot stomping could be heard in signs of support. May walked into the packed meeting to applause.

Two key amendments are being voted on this week — one that would call on the government to keep the U.K. in the EU’s customs union, in breach of May’s negotiating red lines. Pro-Brexit lawmakers are also staunchly opposed to staying in the customs union as it would limit the U.K.’s ability to make its own trade policy.

The other would give unprecedented power to Parliament to direct the Brexit process if lawmakers veto the divorce deal May brings back from Brussels later this year — known as the meaningful vote amendment. This is potentially the most dangerous clause for May and Brexit-backers fear it would give lawmakers the power to stop the divorce happening.

Baker said he was confident the government would defeat both. But it wasn’t immediately clear what ministers have offered in order to get rebels to stand down on the so-called meaningful vote clause.

“We believe that our party is going to unite in the national interest” and send the bill back to the Lords in good shape, Baker told reporters. “That would mean rejecting the amendment we have been given on the meaningful vote.”

Tory rebel Nicky Morgan said she would back the compromise clause on the customs union, while leading pro-Brexit lawmaker Jacob Rees-Mogg was also said by people familiar with his thinking to be in favor.

Potential rebels spent the weekend and Monday discussing their strategy. Two said privately they didn’t want to destabilize May, a point that was also taken up by former Home Secretary Amber Rudd and former Pensions Secretary Iain Duncan Smith, who wrote a joint article warning that defeat could ultimately usher in a Labour government led by Jeremy Corbyn. But others rejected the idea that a defeat could lead to her being forced out.

“Those of us who are rebelling would not vote against the government on a confidence motion,” Conservative MP Sarah Wollaston said in an interview earlier on Monday. “The idea that it is people like myself threatening the prime minister is nonsense. I am not going to be intimidated. I’ve developed a very thick skin.”

Rebels will have another opportunity in July to try to change May’s Brexit policy and maintain closer ties to Europe when the Trade Bill heads back to Parliament. Pro-EU Tories have tabled clauses to the legislation to keep the U.K. in both the single market and customs union — measures businesses want but May has rejected in the name of reclaiming sovereignty.

Below is a closer look at the key amendments that matter most for the direction of Brexit.

On the EU Withdrawal Bill

This amendment gives Parliament control in the final stages of Brexit, preventing the government from signing a deal with the EU that hasn’t been approved by lawmakers. It gives the Commons the ability to send May back to the negotiating table, and probably wouldn’t let the government walk away without a deal.

Brexit backers see this clause as weakening the government’s negotiating position, as they want May to be able to threaten to walk away. It also negates the government’s threat to the rebels: That voting against May’s deal means in effect voting for the chaos of a no-deal Brexit.

In an attempt to prevent a rebellion over the meaningful vote, the government proposed its own amendment saying that if the deal is voted down, it must make a statement within 28 days setting out how it intends to proceed. It’s a significant weakening of the Lords amendment, and doesn’t appear to give lawmakers much sway at all.

3. The Customs UnionVote: Wednesday, after 7 p.m.

The amendment on the customs union probably has majority support in the House of Commons, but the clause is so loosely worded that the government doesn’t consider it binding. It calls for a minister to “outline the steps taken” to negotiate “an arrangement which enables the United Kingdom to continue participating in a customs union with the European Union.”However flabbily drafted the clause may be, defeat for the government would send a strong signal that Parliament doesn’t back the negotiating goals May is pursuing. And the fact it’s so softly worded might make timid rebels think they can vote for it without causing the prime minister too much harm. That may be why the government is urgently seeking a compromise on the language, offering a “customs arrangement” to placate potential rebels.

On the Trade Bill

It’s an amendment that calls for the government to “take all necessary steps to implement an international trade agreement which enables the U.K. to participate after exit day in a customs union with the EU in the same terms as existed before exit day.”

The Labour Party’s official policy is to seek a customs union with the EU, so the amendment has a good chance of being passed if Tory rebels join forces.

The Labour Party leadership is pushing for access to the single market and something very close to the Norway model, but isn’t advocating EEA membership. So the amendment doesn’t look likely to pass.