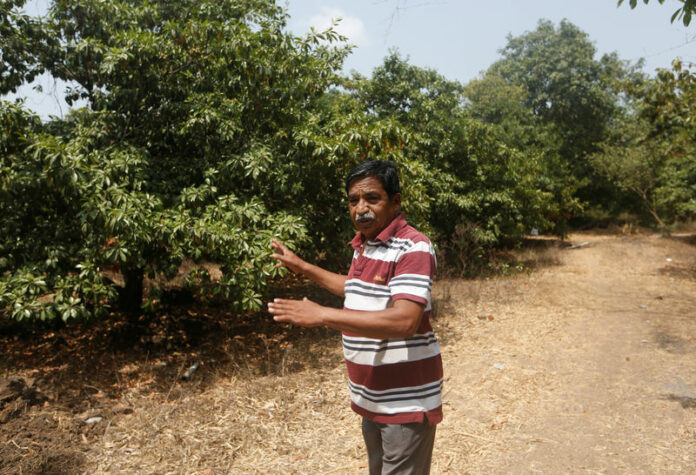 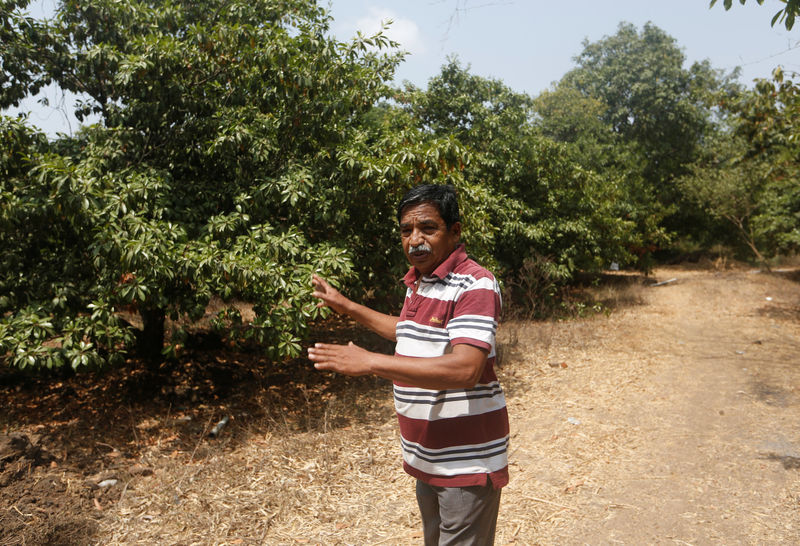 © Reuters. Dashrat Purav, a 62-year old farmer, shows the area of his farm that would be required for the construction of the bullet train track in Palghar

Modi’s office is now monitoring the project week-to-week, as Indian officials seek to reassure Tokyo that the hurdles can be overcome through intense negotiations with sapota and mango growers in the western state of Maharashtra.

Protests, backed by local politicians, have flared up in recent months against attempts to secure sections of a 108-km (67-mile) stretch, which is around one-fifth of the entire bullet train corridor connecting Mumbai with Ahmedabad, the largest commercial city in Modi’s home state of Gujarat.

“I’ve worked hard for three decades to develop this plantation, and they are asking me to hand over this land,” sapota farmer Dashrat Purav, 62, said as he showed his orchard in the town of Palghar, a three-hour-drive north of Mumbai.

“I haven’t worked hard to surrender land for the project. I did that for my children.”

Purav said he would sell his land only if at least one of his two unemployed sons was promised a government job.

Protests against land acquisitions are common in India, where tens of millions of farmers till small holdings. A planned $44 billion refinery to be run by a consortium including Saudi Aramco, the world’s biggest oil producer, is also struggling to secure land in Maharashtra.

“Land acquisition for any project is complex in India,” said Dhananjay Kumar, spokesman for the National High Speed Rail Corp Ltd (NHSRCL) that is overseeing the project. “Here also we are facing difficulty because of so much resistance.”

Failure to procure the bullet train land by the deadline would delay disbursal of soft-loans by Japan International Cooperation Agency (JICA), a government development body, which is reviewing the project next month, said two senior officials with the state-run Indian Railways, declining to be named.

A JICA spokeswoman said that India must create relocation plans for local residents and make them public in order to enter into a loan agreement covering the main part of the bullet train project.

“It is possible that it takes time to sign a contract as India takes proper and careful measures in line with JICA’s guidelines for environmental and social considerations,” she said.

NHSRCL’s Kumar, said in a statement on late Tuesday that the sanction of the loan by JICA was not linked to the land acquisition.

To assuage Japan’s concerns, Indian officials have sought a meeting this month with transport ministry officials in Tokyo, one of the Indian officials said. India wants the project’s completion target to be advanced by a year to 2022, the 75th year of India’s independence.

NHSRCL said in its statement that no such meeting has been requested by India.

A Japanese transport ministry official who deals with the bullet train project said that Indian officials had told them that “they can manage” the land acquisition.

“We will continue to work together with the Indian government to bring this project forward with an aim to start operation in 2023,” the official said.

NHSRCL, a joint venture between the Ministry of Railways and states involved in the project, said at the time that procurement from Japan would be only 18 percent of the total project cost.

Modi has called the project crucial for his pet “Make in India” campaign aimed at lifting the share of manufacturing in India’s $2 trillion economy. The government also hopes to generate hundreds of jobs through the train project, and hence is pushing hard to finish it on time.

To sweeten the terms for people opposed to selling their land, Indian Railways has put its weight behind NHSRCL, pledging funds from its own welfare scheme to build schools and community halls, one of the officials said. NHSRCL said it would be using its own funds for any such welfare scheme.

Ashwani Lohani, chairman of the Indian Railway Board, said the issues with farmers were not insurmountable.

The government has offered to buy land at a 25 percent premium to the market value, the two government officials said. Farmers are also being offered resettlement dues of 500,000 rupees ($7,409) or 50 percent of the land value, whichever is higher.

However, local political opposition in Palghar, ahead of a general election next year, has fanned the protests. Opponents say the bullet train is wasteful and the money would be better used upgrading the country’s rickety rail infrastructure. Farmers have threatened a hunger strike.

Last week, farmers and local activists disrupted a public hearing conducted by NHSRCL, its second attempt to hold such an event in less than a month. The first one last month was also cut short by protests.

“In coming weeks we will intensify the protests,” said Nilam Gorhe, a spokesman for Shiv Sena, a Maharashtra regional party that has an on-off relationship with Modi’s ruling party.