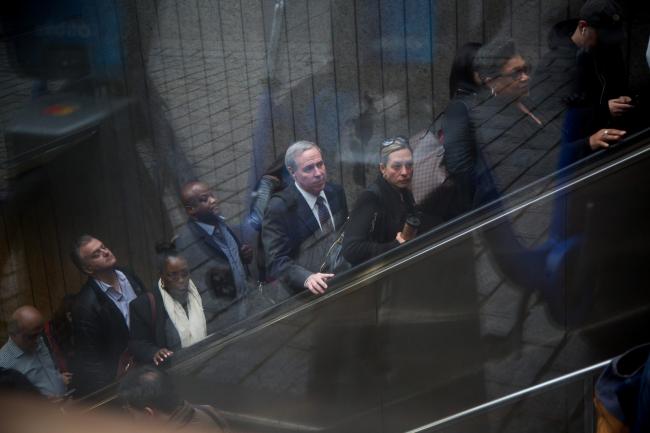 The $1.4 Trillion U.S. `Surplus’ That Trump’s Not Talking About

That’s not a normal trade balance, of course, where the U.S. registered an annual deficit of more than $330 billion with China and about $550 billion with the world last year, but an “aggregate sales surplus” which measures both direct trade and the sales of multinational companies, according to research by Deutsche Bank AG (DE:).

Just looking at the goods and services trade deficit is misleading and doesn’t capture the true size of U.S. business interests, according to Deutsche Bank economists. While trade and corporate data aren’t usually combined, if you add up all trade data, sales by U.S. companies in foreign countries and foreign firms in the U.S., “U.S. companies have sold more to the rest of the world than other countries have sold to the U.S. in the past ten years,” writes chief China economist Zhang Zhiwei in the report.

President Donald Trump’s determination to rein in his nation’s trade deficit has put him at odds with the developed world, a stance that undermined an acrimonious G-7 summit in Canada at the weekend. China and the U.S. are meanwhile locked in negotiations to stave off a trade war, with Trump threatening to slap tariffs on at least $50 billion in Chinese imports after June 15.

For China, the image of a massive trade deficit with the U.S. “is at odds with the fact that Chinese consumers own more iPhones and buy more General Motors (NYSE:) cars than U.S. consumers,” wrote Zhang in the report. “These cars and phones are sold to China not through U.S. exports but through Chinese subsidiaries of multinational enterprises.”

Instead of a growing trade deficit with China, Deutsche Bank estimates there was a small but growing surplus. The increase reflected rising demand of Chinese households for foreign goods and services, driven partly by the wealth effect of China’s property boom. The sales surplus with China may exceed $100 billion by 2020 if the world’s two biggest economies avoid a trade war, Zhang estimates.

The U.S. also ran sales surpluses with nations including Mexico and Canada but had deficits with Japan and Germany last year, Zhang wrote.

“Looking at aggregate sales — summing exports with in-country sales by firms that have invested in China — creates far more problems than it solves,” says Setser, a senior fellow at the Council on Foreign Relations in Washington. “The sales data is useful on its own, but summing it up only confuses things. It doesn’t provide a particularly useful way of thinking about trade.”

What the sales data does show is that the interests of U.S. firms aren’t always the same as the interest of U.S. workers because American firms can profit from growth abroad without exporting from the U.S. and employing U.S. labor, he said.

“Gross sales tell us something about the global position of U.S.-owned firms, and China certainly will look to retaliate against U.S. firms on their operations in China if the trade war spirals out of control,” he said.

However, any retaliation against firms in China may also have an effect at home. That is because the success of those firms overseas provides a boost to the U.S. economy and also partly explains why unemployment is lower in the U.S. than in its major trading partners, according to Zhang.

Deutsche Bank used data from the U.S. Bureau of Economic Analysis to estimate overseas sales of U.S. companies through 2015. For more recent sales it turned to multinational companies in the Standard and Poor’s 500 Index that provide sales reports broken down by country and used those to estimate overall sales by American companies in 2016 and 2017.