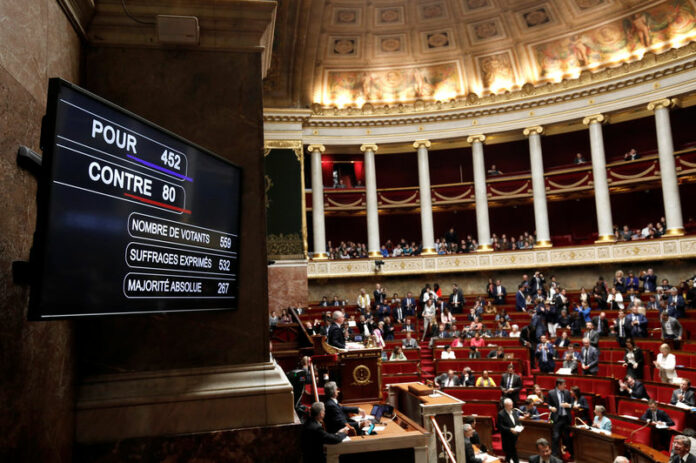 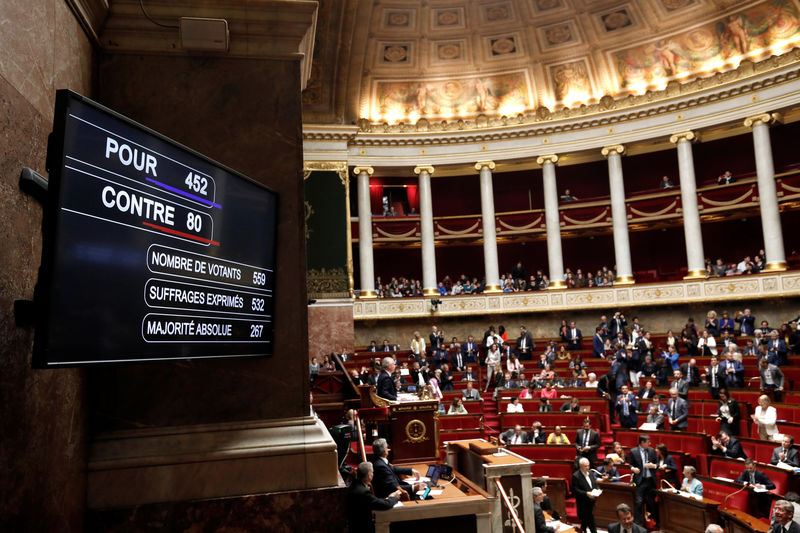 © Reuters. View shows the voting results board in favor of the French government’s SNCF reform bill at the National Assembly in Paris

PARIS (Reuters) – France’s parliament overwhelmingly approved a bill overhauling the indebted state-run rail company SNCF on Wednesday, handing a significant victory to President Emmanuel Macron in his bid to outflank the unions and reform the economy.

The 452 to 80 vote in the National Assembly, where Macron’s Republique En Marche party has an absolute majority, was largely a formality after a committee of the lower house and the Senate agreed joint amendments to the legislation on Monday.

The Senate upper house will approve the bill on Thursday.

It represents the most fundamental reform of the 150,000-strong SNCF since rail nationalization in the 1930s, and Macron has overcome a challenge that defeated previous administrations.

Conservative Prime Minister Alain Juppe had to withdraw welfare reforms in 1995 after weeks of strikes and social unrest led by rail workers.

The new law will turn the SNCF into a joint-stock company, giving its management greater corporate responsibility, will phase out its domestic passenger monopoly from 2020 and put an end to generous benefits and pensions for future employees.

At the same time, the government has committed not to sell any of the stock, a move to reassure unions that it won’t be privatized.

“The government has committed itself to our rail industry as no other has before us,” Transport Minister Elisabeth Borne told FranceInfo radio on Tuesday. “I now urge the unions to take stock of their responsibilities.”

The government has also said it will write off 35 billion euros of the SNCF’s 47 billion euros ($55 billion) of debt, giving the company more room to maneuver and prepare for greater competition from other European operators.

France’s rail unions have been staunchly opposed to the reforms. In April they began three months of rolling strikes in protest, shutting down local, regional and international services for two days out of every five. Those stoppages are set to run until the end of June.

At the start, the public expressed some sympathy — polls showed more than half of those surveyed thought the strikes were justified — but support has waned over time. Commuters have grown fed up with the disruptions and found ways around them, using car-sharing apps, telecommuting or cycling to work.

Gaps in the unions’ position have also emerged and been exploited — a tactic Macron used to sound effect last year in securing the backing of the largest union, the CFDT, for reforms to the labor code to make hiring and firing easier.

The CFDT, the most moderate of the larger unions as well as the biggest, has signaled it will accept the SNCF bill once it becomes law. When the rolling strikes end on June 28, its railworkers are expected to return to work.

The more militant CGT union remains firmly against, with 95 percent of its members voting against the legislation last month. Employees represented by the union have said they will pursue wildcat strikes from July.

But their ability to cause widespread disruption or win public sympathy appears limited. Many CGT unionists are among those who have gradually given up adhering to the strike.

For a graphic see https://tmsnrt.rs/2JnAdwO

“I think the unions may have overplayed their hand here,” said Bob Hancke, a professor of European political economy at the London School of Economics, describing the SNCF as “one of the last bastions of union power in France”.

A change in public sentiment toward organized labor — part of a broader social shift as younger people increasingly engage in the ‘gig’ economy and see the future in technology — has left the unions looking out of touch.

But Hancke warns that while it is an important symbolic victory for Macron, it may do little to improve the business climate in France or stimulate much-needed growth.