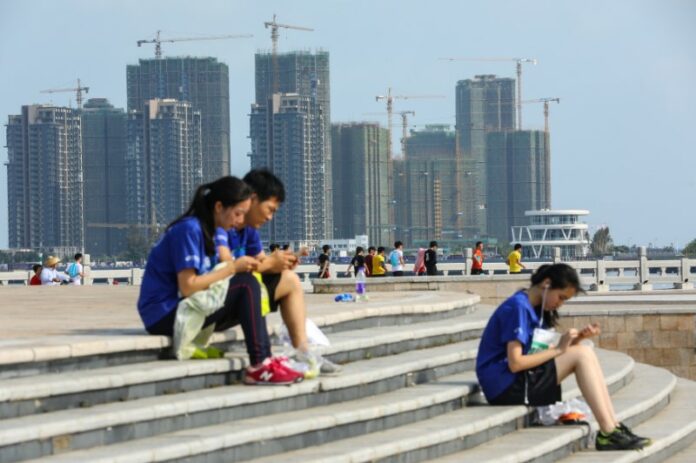 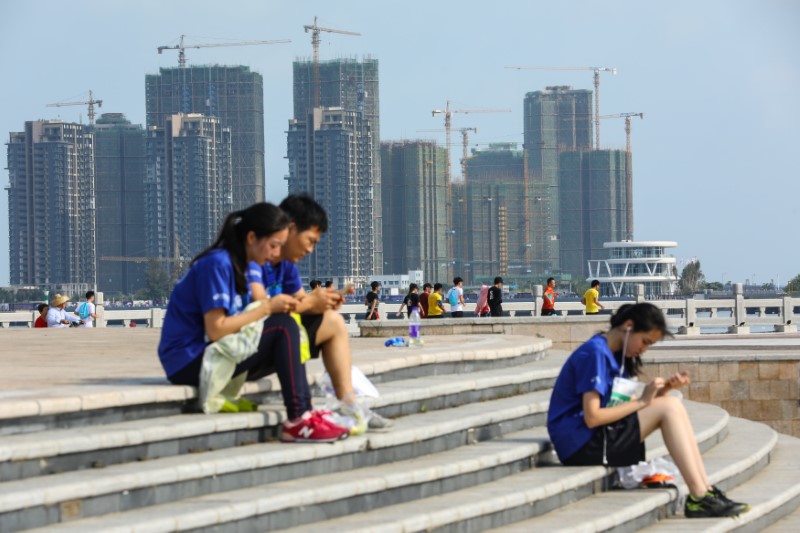 © Reuters. People sit on steps against a backdrop of residential buildings under construction, in Haikou

HONG KONG (Reuters) – Tough measures to cool the property market in China’s resort island of Hainan have put the brakes on a real estate boom and underscore the policy risks developers and investors face as the government tries to rein in prices.

But new measures in April restricting non-residents from buying homes on the island, where non-locals normally comprise about 80 percent of purchases, have caused sales to plunge.

Home transactions in Hainan in terms of area fell 14 percent in May compared with April, and were down 41 percent from a year ago, according to the real estate research firm CRIC. Official home price data for May is due to be released on Friday.

The slide comes as the State Council maps out plans to transform Hainan into China’s largest free trade zone and upgrade its core industries to include not only tourism, but also modern services and high technology.

China has been imposing controls across the country to rein in rocketing property prices, often fueled by speculators. The tough new measures in Hainan came after prices jumped by more than 50 percent in some developments after Beijing announced the creation of the free trade zone in mid-April.

“A free trade zone provides good prospects to the long-term economy so our clients are very positive about it,” said Andy Lee, chief executive with Centaline South China, a realtor. “The irony is, even though they are positive they can’t buy any properties.”

Property agents in the resort island are now packing their bags as they seek greener pastures in other provinces.

Li Xuelong, a Hainan property agent, said a number of colleagues had left the island in the past month, while many clients had canceled purchases after authorities introduced what they described as China’s “most stringent tightening measures”.

“Many of my colleagues have moved to Guangxi and Yunnan to look for business opportunities,” Li said, referring to two provinces nearby that are also popular with tourists.

With a series of fresh cooling measures announced since late March, Hainan has effectively restricted non-residents from buying homes in a property market that has been highly dependent on tourism and foreign buyers.

Other measures include forbidding home owners to sell properties within five years of purchase.

The tropical island had attracted many buyers looking for holiday homes or property for speculation. Buyers came mainly from northern inland areas, where temperatures can fall below 30 degrees Celsius in winter.

The cooling property market could have a ripple effect on tourism projects in the resort province, industry watchers said.

“Many developers entered Hainan to sell to outsiders,” said Centaline’s Lee. “Many of them are engaged in tourism property, so the tourism business is for facilitating the property business. Now with the main business going under water, the tourism projects may have to be suspended.”

The central government hopes Hainan will reduce its reliance on real estate, but Lee said the transformation could take a big toll on local government coffers, which derive more than 50 percent of their income from real estate, before the free trade zone positively impacts the local economy.

Developers said there was nothing they could do but wait for the cooling measures to be lifted, although many said they intended to stop buying land in Hainan.

Michael Lee, finance director at Guangzhou R&F Properties (HK:), said the company did not have plans to adjust its Hainan sales strategy in response to the policy changes.

An executive of another developer, who declined to be named as he was not authorized to speak to media, said the company planned to hold on to its remaining unsold apartments, in hopes their value would increase after a few years.

“We will look for more land bank in third- and fourth-tier cities where there’s less tightening,” the executive said. “The country’s policies kept changing so we had to adjust ourselves.”

In late April, local media reported that some developers had allowed buyers to get around Hainan’s home purchase restrictions by using rental contracts or forward-dating agreements to buy apartments.

“But this is risky both for developers and buyers, because regulations can change again at any time,” said Li, the property agent.