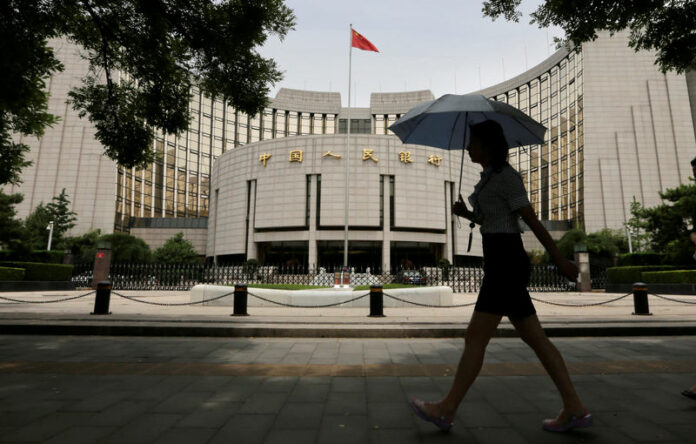 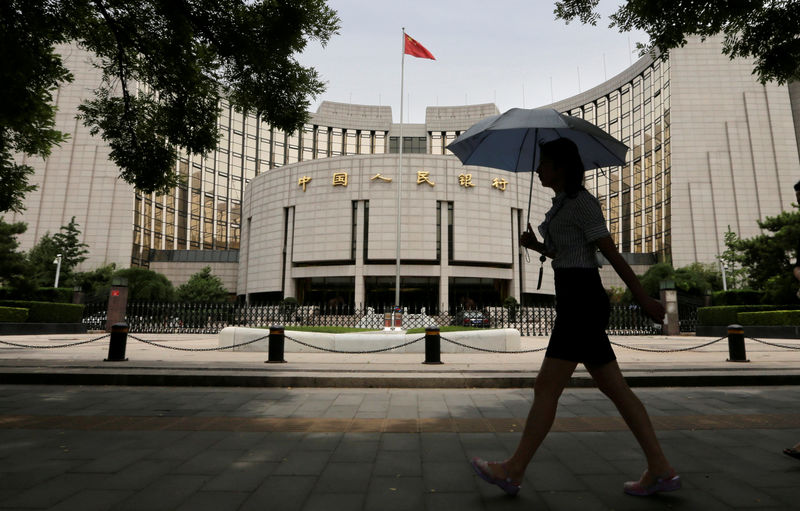 © Reuters. FILE PHOTO: Woman walks past the headquarters of the PBOC in Beijing

BEIJING (Reuters) – China should cut banks’ reserve requirement ratios (RRR) to help ease their burdens, the central bank said in a working paper on Tuesday, fanning expectations of an imminent policy move as its governor urged investors to remain calm.

Fears of a full-blown trade war with Washington have magnified concerns about the outlook for the world’s second-largest economy, following weaker-than-expected growth data for May and as a regulatory crackdown in its third year starts to weigh on business activity.

The People’s Bank of China surprised markets earlier in the day by lending 200 billion yuan ($31 billion) to financial institutions via its medium-term lending facility (MLF), highlighting concerns over liquidity and a potential drag on trade.

That came hours after U.S. President Donald Trump escalated the tit-for-tat trade scrap by threatening to impose a 10 percent tariff on $200 billion of Chinese goods.

A clampdown on off-balance sheet financing activities has put pressure on Chinese banks, sparking a small but growing number of credit defaults. Authorities have moved to curb a debt build-up at local governments and companies, the PBOC said in the working paper published on its website.”China should appropriately reduce its reserve requirements to ease burdens on financial institutions and smooth the interest rate transmission mechanism,” it said.

However, as China is still a developing country, it is still necessary to keep the RRR at relatively high levels, it said.

The PBOC in April unexpectedly cut reserve ratios for most banks by 100 basis points (bps), in a move that was earlier and more aggressive than expected. Many analysts had expected further RRR cuts in coming months.

Economists at Nomura say there is a good chance of another 100 bps RRR cut this month or next,

They also predict the central bank will provide more direct funding to the market, but will “most likely” keep policy rates unchanged.

Last week, the PBOC decided not to follow a rate rise by the U.S. Federal Reserve with even a symbolic increase in short-term rates — a break from its recent practice — signaling that some policy fine-tuning is in the offing, policy sources told Reuters.

‘A COMBINATION OF TOOLS’

“We will prepare relevant policy tools in a forward-looking manner, use a combination of monetary policy tools to maintain liquidity at an appropriate and stable level,” Yi said.

The PBOC will also make sure that structural de-leveraging progresses with the right strength and at the right pace to promote stable and sound economic growth and prevent systemic financial risks, he added.

“There are ups and downs in the stock market and so, investors should be calm and rational,” Yi said on the central bank’s website www.pbc.gov.cn.

“China is in good position to cope with all kinds of trade frictions.”

The PBOC working paper also said it was urgent to transform China’s monetary policy from a reliance on quantitative, liquidity tools such as RRR and various lending schemes to price-based methods, referring to market rates.

It added that authorities would gradually unify market interest rates, deposit and lending rates, reiterating past pledges without giving a timeframe.

The central bank should also increase its tolerance for fluctuations in the yuan’s exchange rate and quicken market-based currency reforms, the paper said.

The PBOC has published three working papers so far this year, compared with five in all of 2017.