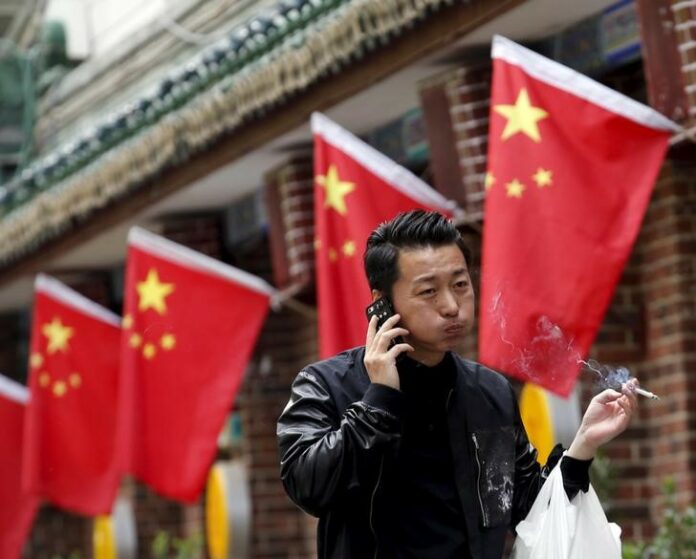 China Has a Nuclear Option in the Trade War

© Reuters. China Has a Nuclear Option in the Trade War

Bringing a Trade Knife to a Trade Gun Fight

When Donald Rumsfeld said a variation on this back in 2004, he was telling American troops to stop complaining about going to Iraq with inadequate gear. Today the U.S. is blustering into a different kind of war, a trade war with China, and it’s not clear it has the right weapons for this one, either.

Trade wars are dumb and hurt everybody, but if you must launch one, the key is to make sure you don’t hurt yourself more than you hurt your opponent, points out David Fickling. So far in the early days of the war President Donald Trump seems eager to prosecute, U.S. tariffs have managed to target goods that won’t raise prices for American consumers/voters. But given that consumables make up so much of what we import from China, the pain point isn’t far away, David warns:

Jacking up consumer prices just ahead of an election – when gas prices are already rising because of Trump’s dismantling of the Iran nuclear agreement – could politically damage him and Republicans up for reelection. It’s another example of how his strong-arm tactics, which may have worked in New York real estate, backfire in politics, writes Jonathan Bernstein. Meanwhile, the only voter President-for-Life Xi Jinping fears is the Grim Reaper.

Because China has a big trade surplus with the U.S., it can’t nearly match the American tariffs. But it can hurt U.S. companies doing business there. And it has a doomsday weapon, notes Brian Chappatta: It can just stop buying U.S. Treasury debt. China is the world’s biggest Treasury investor, keeping U.S. borrowing costs low, helping us buy more stuff from China. Ending this symbiotic relationship just when U.S. budget deficits are soaring would devastate the U.S. economy – but it could blow up China’s too.

A combination of politics and economics should pull both sides back from mutually assured destruction – assuming both sides want to avoid that. With Trump, that’s not entirely clear.

As we discussed yesterday, Trump’s new “zero tolerance” illegal immigration policy that is tearing apart families is cruel, immoral and will only lead to worse consequeqnces the longer it continues. It will also make it harder to come up with a reasonable compromise on immigration, write Bloomberg’s editors. As with trade, though, it’s not clear Trump wants that either.

What is clear is that Trump is using his standard M.O. in response to the public-relations crisis of thousands of traumatized children at the border: He’s lying, deflecting blame and confusing his followers via social media, notes Tim O’Brien. It’s the latest test of whether “Trump’s con game gets the better of institutions and basic decency,” he writes.

If Trump really wanted to, it would be extremely simple for him to end the traumatization of children right away, writes Ramesh Ponnuru. Canceling the “zero tolerance” policy is the easiest way. He could also tell the Republicans that control Congress to write a law letting him use the policy while keeping families together. It’s almost as if he and advisers such as Stephen Miller and Jeff Sessions see breaking up families as a feature, not a bug.

During the financial crisis, politicians in big democratic countries floundered, and in many cases actively tried to limit the political response. That left the burden for saving the world on the shoulders of central banks. These unelected technocrats did save the day. But this dynamic also undermined democracy by taking power out of the hands of the people, writes Ferdinando Giugliano. It’s part three of Bloomberg Opinion’s series on economics and democracy.

One almost sure-fire sign of a recession is an “inverted yield curve” – when short-term interest rates are higher than long-term ones. In U.S. yields that hasn’t happened yet – though they are the narrowest since 2007, the last halfway decent year before all heck broke loose. But Robert Burgess points out the curve for all global bonds has inverted already – an ominous sign for the global economy.

As for the U.S. yield curve, Brian Chappatta writes that heavy pension-fund demand for longer-dated Treasury bonds might be artificially flattening the yield curve. That means the recession signal of an inversion might not be as clear as it usually is. Still, “it’s different this time” are famous last words.

As Facebook (NASDAQ:) shrinks in importance to the youngs, it only makes sense for Facebook to jam more ads where the youngs gather, writes Shira Ovide.

Too many of our smartest students are going into banking and consulting, writes Noah Smith:

Why does New York have less crime than London? Maybe because it has more cops. – Justin Fox

Stocks started to worry about trade wars. The U.S. is pulling out of the UN Human Rights Council. Elon Musk wants Tesla (NASDAQ:) employees to be more paranoid.

Adult Swim, which brought us such nightmares as Too Many Cooks, is turning business-themed stock footage into horror films.

The deaths of XXXTentacion and Lil Peep are reminders that rap is suffering from a generational crisis.