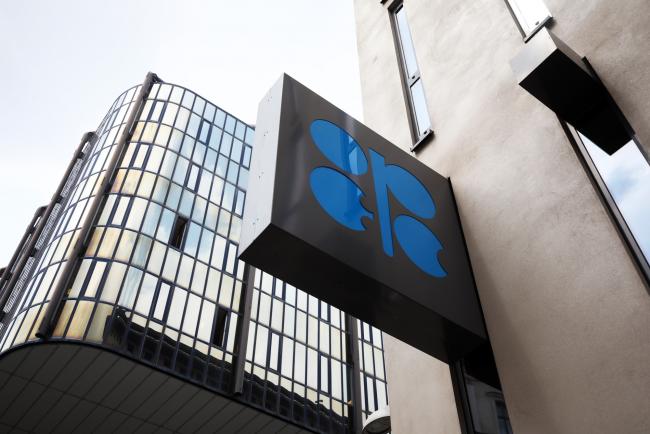 OPEC Faces a Bigger Problem in Washington Than Trump Tweets

© Bloomberg. An OPEC sign hangs outside the OPEC Secretariat ahead of the 172nd Organization of Petroleum Exporting Countries (OPEC) meeting in Vienna, Austria, on Wednesday, May 24, 2017. OPEC and non-OPEC countries meet on Thursday in Vienna to approve the rollover as delegates say the nine-month extension has broad support. Photographer: Akos Stiller/Bloomberg

(Bloomberg) — American politicians are at it again: punching OPEC.

The cartel has often been a bogeyman for U.S. politicians since the first oil crisis in 1973. Now OPEC is facing a renewed political assault in Washington, directly from President Trump’s Twitter account, and quietly, but potentially more dangerously, from Congress.

In books and social media postings going back 30 years, Trump has repeatedly attacked the Organization of Petroleum Exporting Countries, saying should be around $30 a barrel and arguing OPEC was stealing money from American citizens.

The president’s track record is important now because U.S. lawmakers have resurrected the so-called “No Oil Producing and Exporting Cartels Act,” or NOPEC, which proposes making the cartel subject to the Sherman antitrust law, used more than a century ago to break up the oil empire of John Rockefeller.

The bill was re-introduced in late May and cleared its first legislative hurdle last week when the House Judiciary Committee quickly sent it to floor deliberation. It would allow the U.S. government to sue OPEC for manipulating the energy market, potentially seeking billions of dollars in reparations.

For OPEC, which meets later this week in Vienna to discuss oil production, the bill is a fat-tail risk. The chances that it passes are small, but if it happened the consequences would be enormous. For some, the NOPEC bill stands comparison with the Justice Against Sponsors of Terrorism Act, or JASTA, which for the first time permitted lawsuits against Saudi Arabia over the Sept. 11 terrorist attacks.

U.S. politicians have tried several times since 2000 to pass the NOPEC bill, but the White House opposed it — both George W. Bush and Barack Obama threatened to use their veto. The risk for OPEC is that Trump may break with his predecessors.

“Unlike past presidents, Trump is much more likely to sign it,” said Jason Bordoff, director of the Center on Global Energy Policy at Columbia University in New York and a former Obama administration oil official.

Trump, before becoming president, didn’t just support the NOPEC bill, he was a cheerleader. “We can start by suing OPEC for violating antitrust laws,” he wrote in his 2011 book “Time to Get Tough: Making America #1 Again” about the problem of high oil prices.

“Currently, bringing a lawsuit against OPEC is difficult,” he wrote. “The way to fix this is to make sure that Congress passes and the president signs the “No Oil Producing and Exporting Cartels Act.”

Bob McNally, founder of consultant Rapidan Energy Group LLC and a former oil official at the White House under George W. Bush, said that “given President Trump’s strong past support for NOPEC in his book and maverick style, NOPEC’s chances have never been better.”

OPEC officials are worried, both about the bill itself and the potential for Congressional hearings attacking the cartel.

Hossein Kazempour Ardebili, Iran’s representative at OPEC, said over the weekend that the U.S. bill was an attempt to “blackmail” the group, adding that using antitrust law is “nonsense legally speaking, and we in OPEC are fighting it.”

In Washington, however, U.S. lawmakers, facing raising pump prices in the months before midterm elections to decide which party controls Congress, are talking equally tough.

“OPEC is an international cartel whose members deliberately collude to limit production as a means to fixing prices, unfairly driving up the price of crude to satisfy the greed of oil producers,” Jerrold Nadler, a Democrat lawmaker from New York, who’s co-sponsoring the legislation, told the Judiciary Committee last week.

The bill faces a long, difficult journey before it can become law. Previous attempts have cleared the Judiciary Committee four times, and despite a veto threat by then-president George W. Bush, the bill even got approved by the House of Representatives in 2007 in a 345-72 vote, and the Senate by 70-23, only to die afterward.

It remains to be seen if House leadership will bring the bill to the floor for a vote, said Brian Griffith, a spokesman for bill sponsor Representative Steve Chabot, an Ohio Republican.

NOPEC doesn’t necessarily require a stand-alone floor vote. A back-door route to approval would be to add it as an amendment to a larger bill that the leadership could be reluctant to stop, such as a continuing resolution.

The White House has yet to signal where it stands. If Trump flip-flops, he won’t be the first president to do so: Obama voted in favor of the bill as a senator in 2007, but opposed it as president.

Yet Obama didn’t have Trump’s decades-long history of OPEC-bashing that started in its 1987 book “Trump: The Art of the Deal,” where he describes how the group was responsible for the troubles American airlines suffered in the 1970s.

The attacks have lately increased as oil prices rose to $80 a barrel and gasoline prices soared.

“Looks like OPEC is at it again,” Trump tweeted on April 20, his first comment on social media about OPEC since he became U.S. president. “Oil prices are artificially Very High!”

He repeated his attack this month, saying: “Oil prices are too high, OPEC is at it again. Not good!”

(Updates with details of legislative procedure in 18th paragraph.)