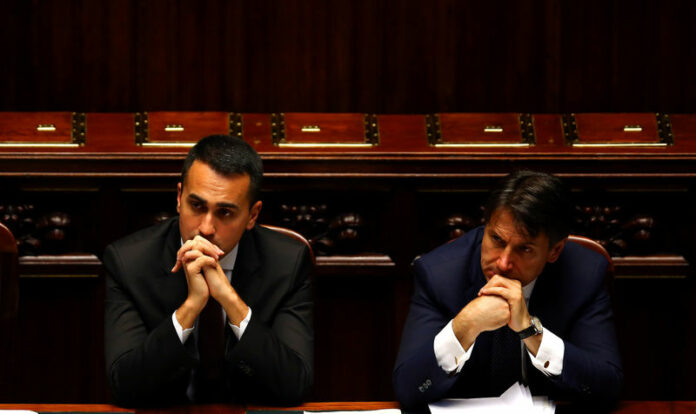 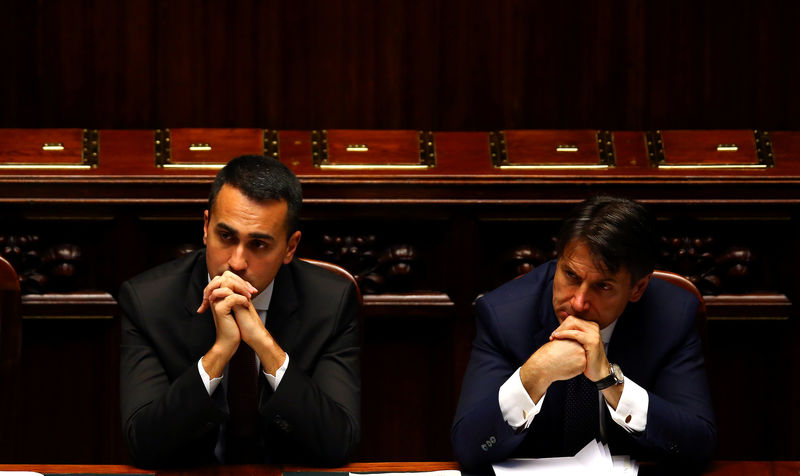 © Reuters. Italian Minister of Labor and Industry Luigi Di Maio listens next to Prime Minister Giuseppe Conte during his first session at the Lower House of the Parliament in Rome

Since coming to power earlier this month the new government in Rome – comprising the populist 5-Star Movement and far-right League – has been at pains to reaffirm its support for the euro. That commitment has at least partly reversed a late-May bond selloff, sparked by fears of snap elections that might become a de facto referendum on the single currency.

But uncertainty over Italy’s future within the euro lingers.

“‘Quitaly’ or ‘Italexit’, or whatever you wish to call the possibility of Italy leaving the euro area, is not on the political horizon. But once the seed of risk is planted, financial markets tend to extrapolate,” said Shweta Singh, senior economist at TS Lombard.

Another crunch could come in October when the government’s 2019 budget is released. Its proposed spending plans are at odds with EU fiscal rules and, if carried out in full, could worsen what is already the euro zone’s second-highest public debt ratio.

There are also concerns the new administration has not entirely shelved prior plans to issue short-dated securities to pay state arrears – a move some fear effectively creates a parallel payments system and proxy lira.

So how significant are these risks in the eyes of investors and what gauges do financial markets use to measure the outside chance of “Quitaly”?

Here are some that are monitored closely and will be watched over the months ahead:

Italy’s yield spreads over Germany widened at the end of May to over 300 basis points, a five-year high. That is effectively the premium investors demand to hold Italian debt because of its default risk. But to gauge risk of re-denomination rather than just default, nominal yield spreads may be inadequate.

A better gauge, according to Marcello Minenna, contract professor of financial mathematics at Milan’s Bocconi University, is the spread between German and Italian “real” bond yields, i.e. the gap after accounting for inflation differentials.

That spread currently stands around 3.5 percent, having risen above 4 percent during the Italy selloff peak on May 29 — the highest since mid-2013. Nominal yield spreads meanwhile are lower than that, around 2.2 percentage points. https://tmsnrt.rs/2JOI3Ez

Minenna explains that Italy’s nominal yields do not properly reflect inflation risks because its monetary policy is not set by its own central bank which does not have the option, if needed, to buy government bonds by printing money on a permanent basis.

So the BTP/Bund real spread is a better proxy of the default risk for Italy.

In a Quitaly scenario in which Rome reverts to the lira, a few things would change: First Italy would set its own monetary policy, meaning its securities would again reflect inflation risk. Second, default risk would then include the inflation risk as all new debt would be in its own currency.

But because this currency would likely decline sharply in value against the euro, Italian inflation would rise, causing investors to demand a higher yield premium. Hence, “inflation risk would become again a first component of the insolvency/default risk,” Minenna said.

True, a sharp Italian inflation spike would also do this. But that’s not happening —  in fact, Italian annual inflation was at 1 percent in May, half of German levels.

Italy, has two dollar-denominated bonds maturing in 2023 and 2033. Both outperformed their Italian-issued, euro-denominated peers during May’s bond rout.

While yields on conventional long-dated Italian bond () soared more than 100 basis points in May, the yield on dollar-denominated Italian government bond maturing in 2033 climbed about 80 bps

That’s because dollar bonds governed by New York law would offer stronger protection against debt restructuring, including a currency redenomination, than the euro issues governed by Italian law.

Michael Leister, head of rates strategy at Commerzbank (DE:), says that while dollar-denominated bonds are less liquid and therefore harder to trade, their recent outperformance suggests a rush to hedge the higher default risk in domestic bonds.

3. From one CDS to another

Credit default swaps – derivatives used to insure exposure to a credit default – surged during the recent mini-crisis, but CDS contracts based on guidelines drawn up in 2014 rose more than those based on a 2003 definition.

That’s because 2014-vintage CDS are considered more likely than their 2003 counterparts to pay out if a country like Italy exited the euro and re-denominated debt back into the lira.

The 2003-dated CDS guidelines, created before Greece’s euro exit scare in 2011-2012, provide for payouts for non-payment of debt but make it harder to call a default in event of re-denomination.  The spread between the two CDS sets – commonly known as the ISDA-basis after the body regulating CDS – can be considered a measure of redenomination risk.

On May 29, the Italy selloff peak, the ISDA basis widened to a record 120 basis points, described by TS Lombard’s Singh as the “rising cost of protection against redenomination.”

These require a specified majority of creditors to agree a restructuring. All sovereign euro zone debt issued after 2014 requires majority bondholder approval if the issuer wants to change the currency of payments.

Around half of outstanding Italian debt was issued before 2013. During the rout, yields on bonds rose but less than on those without CACs.

While some of this could reflect domestic euro deposit flight to non-Italian euro zone banks, the total is muddied by ECB purchases of Italian government bonds via its quantitative easing scheme.

Overall, the concern is that if Italy were to leave the bloc these balances would have to be settled, and complicated by redenomination or default.

During the 2012 debt crisis, capital outflows had driven the increase in Target2 imbalances and many reckon this could happen again should Quitaly fears resurface.

“We believe that a further increase of Italian Target2 (im)balances is likely to reflect underlying concerns about the potential re-denomination or default of Italian assets and may amplify prevailing tensions at the EU level,” Goldman Sachs (NYSE:) told clients.

They added that should Italy’s euro membership doubts rise further, “outflows from Italy toward northern euro area countries could resume as Italian residents seek a haven from re-denomination risk.”

Demand for Italy’s dollar-denominated debt jumped during May crisis https://reut.rs/2JFkldR