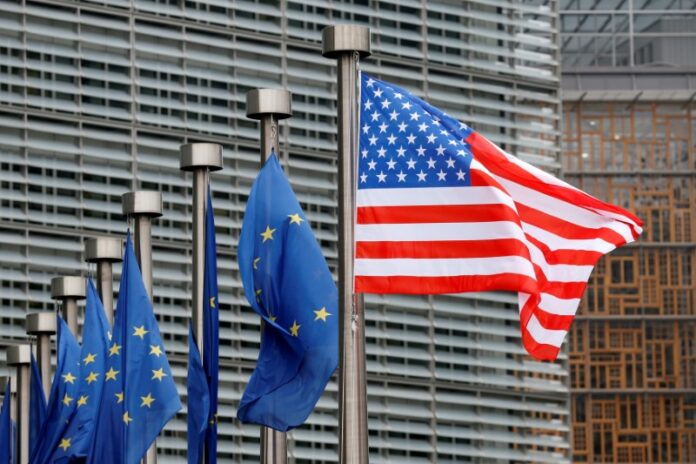 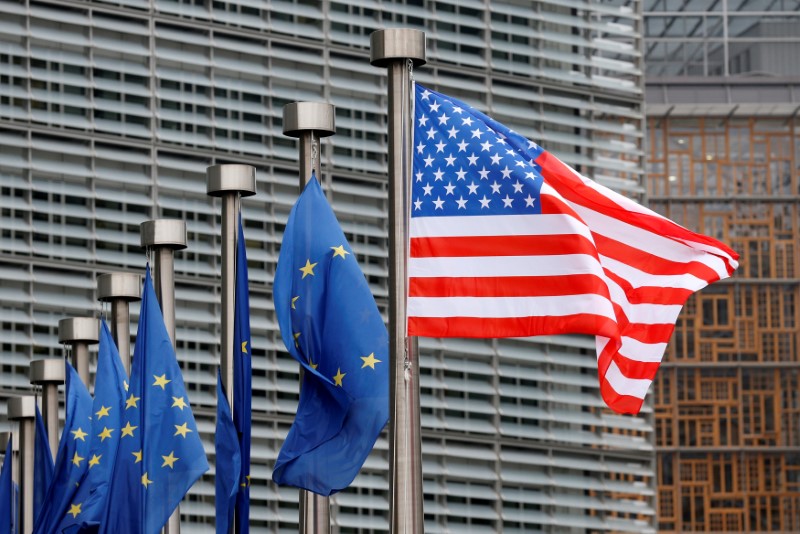 © Reuters. FILE PHOTO: U.S. and EU flags are pictured during the visit of Vice President Pence to the European Commission headquarters in Brussels

BRUSSELS (Reuters) – The European Union will begin charging import duties of 25 percent on a range of U.S. products on Friday, in response to U.S tariffs imposed on EU steel and aluminum early this month, the European Commission said on Wednesday.

The move confirms a tit-for-tat dispute that could escalate into a full trade war, particularly if U.S. President Donald Trump carries out his threat to penalize European cars.

The Commission formally adopted a law putting in place the duties on 2.8 billion euros ($3.2 billion) worth of U.S. goods, including steel and aluminum products, farm produce such as sweetcorn and peanuts, bourbon, jeans and motor-bikes.

“We do not want to be in this position,” EU Trade Commissioner Cecilia Malmstrom said in a statement, adding that the “unilateral and unjustified” U.S. decision had left the EU with no choice.

She called the EU response proportionate and in line with World Trade Organization rules and said that they would be removed if Washington removed its metal tariffs. EU steel and aluminum exports now facing U.S. tariffs are worth a total of 6.4 billion euros.

Donald Trump hit the EU, Canada and Mexico with tariffs of 25 percent on steel and 10 percent on aluminum at the start of June, ending exemptions that had been in place since March.

Canada has announced it will impose retaliatory tariffs on C16.6 billion ($12.5 billion) worth of U.S. exports from July 1.. Mexico put tariffs on American products ranging from steel to pork and bourbon two weeks ago.

Some of the products chosen are designed to target the states of Republicans, who are seeking to retain control of both chambers of Congress in November elections.

The EU also has in reserve potential tariffs of 10 percent to 50 percent that it could impose on a further 3.6 billion euros of U.S. imports in three years’ time.