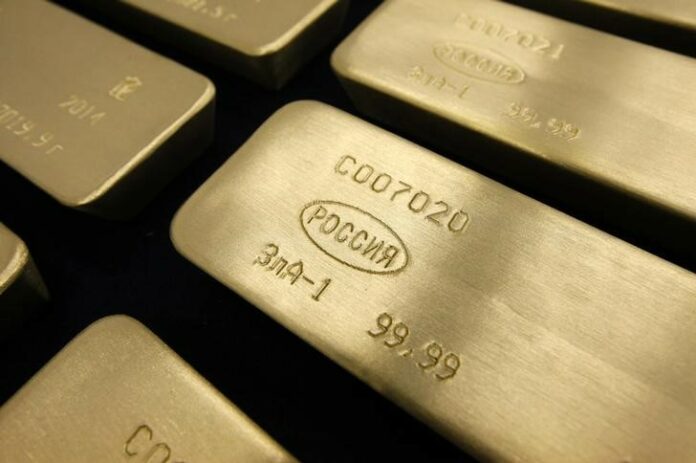 © Reuters. Gold was steady at a six-month low.

Investing.com – Gold prices were steady at a six-month low on Wednesday, as the greenback rose and trade tensions waned.

Trade tensions between the U.S. and China eased but still remained on the back of investors minds, as the two largest economies in the world faced a tit-for-tat over trade tariffs.

Equities and commodities tumbled on Tuesday after U.S. President Donald Trump threatened to impose tariffs on another $200 billion of Chinese goods if China refused “to change its practices,” he said.

Investors often turn to gold in times of political uncertainty, as the precious metal is often considered a safe haven from the impact of geopolitics but gold has struggled amid the latest political risks due to the strength in the greenback.

Gold is denominated in the U.S. currency and is sensitive to moves in the dollar. Bullion becomes more expensive for holders of other currencies when the dollar rises and cheaper when it falls.

The , which measures the greenback’s strength against a basket of six major currencies, was at 94.76, rising 0.12%.

The dollar inched forward after , citing a strengthening U.S. economy.

“Today, with the economy strong and risks to the outlook balanced, the case for continued gradual increases in the federal funds rate remains strong and broadly supported among FOMC participants,” Powell said at the ECB Forum on Central Banking in Sintra, Portugal.

The Fed has raised rates twice this year, with the possibility of two more rate hikes by the end of the year.