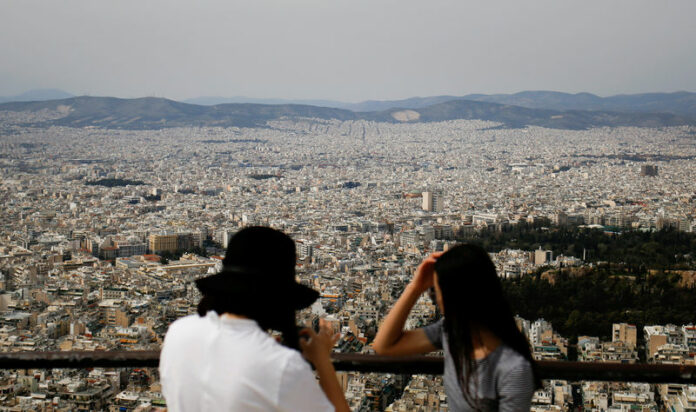 © Reuters. FILE PHOTO: People enjoy the cityscape from atop Lycabettus hill in Athens

ATHENS (Reuters) – Greece expects euro zone finance ministers to deliver on promised debt relief this week so that it can at last plan its financial future “like any ordinary country”, the government spokesman said on Wednesday.

Ministers in the Eurogroup will meet in Luxembourg on Thursday to consider plans for easing the debt burden, which at 179.8 percent of annual Greek GDP is proportionately the greatest in the 19-nation euro zone.

“We are optimistic that we are on the verge of a solution with substance,” spokesman Dimitris Tzanakopoulos said, adding that this would “have a multiplying effect on the momentum of the Greek economy”.

Shut out of debt markets in 2010, Greece is set to exit its international bailout program formally in August. The Eurogroup will discuss debt relief to ensure Athens can return to market financing after eight years of loans from euro zone governments and the International Monetary Fund.

“The accepted criteria for all sides is that this solution be convincing for markets and embed the creditworthiness of our country – the final act in restoring the credibility of Greece to be able to plan for the next day like any ordinary country,” Tzanakopoulos told a news briefing.

Under the biggest sovereign rescue package in history, Greece received about 270 billion euros ($320 billion) in loans from its euro zone partners and the IMF in three bailouts.

The European Stability Mechanism (ESM) holds more than half of the country’s public debt and, as its biggest creditor, is keen to see Greece regain market access sustainably.

EU officials have repeatedly said the meeting will be crucial to seal Greece’s financial future. Decisions will need to be made on the use of about 40 billion euros that remain unspent under its third, 86 billion-euro bailout program which expires on Aug. 20.

Greece has already received substantial debt relief during the crisis. Private creditors cut the value of their holdings of Greek government bonds by more than half in 2012.

As a result Greek debt stock was cut by about 107 billion euros. Official creditors do not accept such “haircuts” but have eased lending terms which reduced the net present value of the loans granted to Athens, resulting in further budget savings.

European creditors will probably grant frontloaded debt relief to Greece by using the funds left over in the third bailout to buy out part of the IMF loans, said Miranda Xafa, senior fellow at the Centre for International Governance Innovation.

“Together with the build-up of a cash reserve, this form of debt relief ensures that Greece won’t need significant market access while its borrowing costs remain prohibitive.”

However, Tzanakopoulos said there was no truth in speculation that this deal was tied in any way to Greek debt relief.