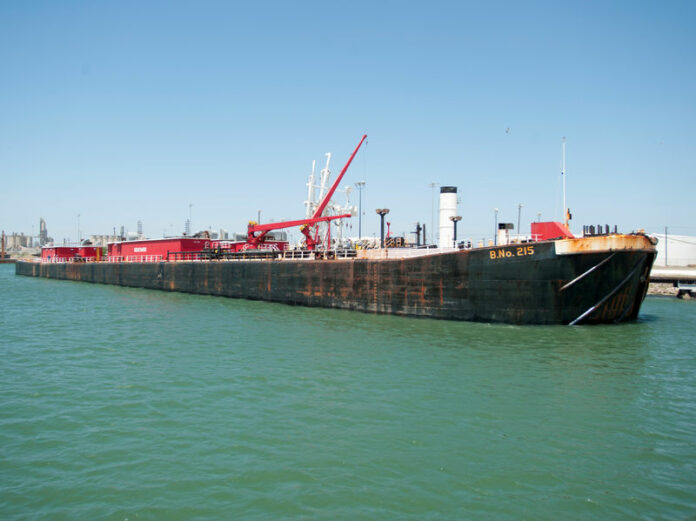 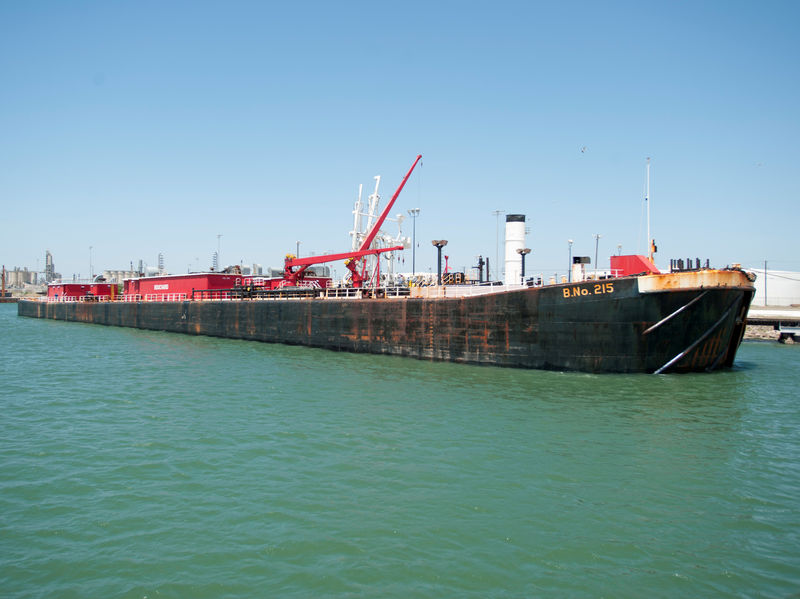 © Reuters. FILE PHOTO: A seagoing barge loaded with crude oil from the Eagle Ford Shale formation at the Port of Corpus Christi

NEW YORK (Reuters) – Oil markets are bracing for a reshuffle of global trade flows as China threatens to impose tit-for-tat tariffs on imports of U.S. energy products, including crude.

China, which has bought an average 330,000 barrels per day (bpd) of oil this year, is threatening to place a 25 percent tariff on various U.S. commodity exports, including crude oil, although it is so far unclear when such a measure would come in place.

The decision came in response to U.S. President Donald Trump saying he was pushing ahead with hefty tariffs on $50 billion of Chinese imports.

And it triggered an aggressive response by Trump, who on Monday threatened to slap a 10 percent tariff on $200 billion of Chinese goods in addition to the import duties previously announced.

The tariffs could restrict the flow of U.S. barrels going to China – a business now worth almost $1 billion per month

An import duty would make U.S. oil less competitive than other crudes, almost certainly resulting in a sharp fall of Chinese purchases, forcing U.S. oil firms to find other buyers.

In the first three months of this year, U.S. crude made up around 5 percent of China’s total crude imports, according to Chinese customs data.

“It’ll take the (U.S. oil) industry a few months to find new outlets,” said Scott Shelton, a broker at ICAP (LON:) in Durham, adding that U.S. crude flows to Europe and the Mediterranean will likely pick up.

For graphic on U.S. vs international oil prices click https://reut.rs/2M7us7P

Outside China, however, WTI remains at a $10 per barrel discount to

Many traders expect this discount to widen further should the flow of U.S. oil to China slow, meaning that other producers would have to deal with high volumes of cheap American oil becoming available in other big markets, including Europe.

China, in turn, is likely to replace the U.S. oil with increased purchases from top suppliers Russia and Saudi Arabia.

Saudi and Russia are already pushing for an increase in production at a meeting of The Organization of the Petroleum Exporting Countries (OPEC) this week.

“I think it would create a carousel affect where China then buys more alternate grades and other importers buy more U.S. grades,” a trader with a global merchant said.

The United States, where oil production

European countries, including Italy and the Netherlands, accounted for the bulk of the increase in April U.S. crude exports.

Some traders expect U.S. barrels to get trapped if the dispute between the world’s two biggest economies turns into a fully blown trade war, which in turn would force own the price of U.S. crude even further.

“There is going to be a sales lull that will keep these barrels trapped and the widening of the spread that we see will persist and get worse before it gets better,” said John Kilduff, partner at Again Capital LLC in New York.

As the trade dispute between Washington and Beijing heats up, the world’s top oil producers are set to gather in Vienna, Austria, on June 22 to set global output strategy.

Producer group OPEC, which is effectively led by Saudi Arabia, has been withholding supplies since 2017 to prop up prices together with non-OPEC members like top producer Russia

Russia and Saudi Arabia are both pushing for an increase in output to make up for losses in supplies in Venezuela as well as looming U.S. sanctions against Iran.

Russia’s flagship Urals crude oil is one of the grades preferred by China’s independent refiners, known as teapots.

Middle East light grades such as Murban, therefore, would now have an even easier time finding a home in China, traders said.

Overall, however, traders do not expect serious supply shortfalls to result from Chinese crude tariffs against the United States.

“The world’s an awfully big place, consuming an awful lot of oil, so you may not have it that much harder for to go elsewhere,” said Spencer Dale, chief economist at oil major BP (LON:).

“You may see some differences in … oil flows (but) I don’t see it, at the moment, as a source of major disruption … Some of that oil which would’ve been supplied by U.S. into China will go elsewhere,” he added.