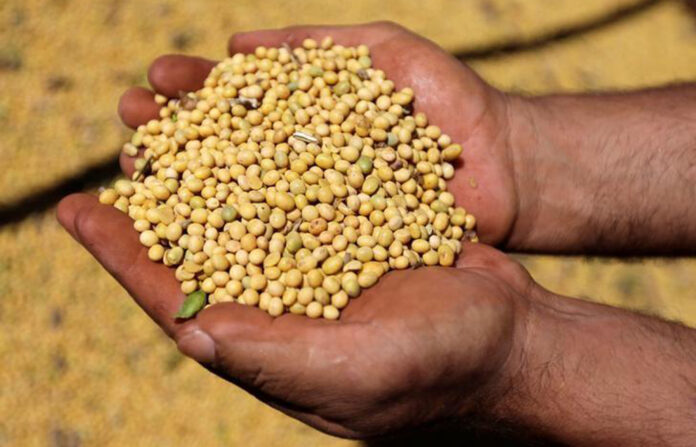 SINGAPORE/PARIS: Chicago soybean futures edged higher on Wednesday as the market pared most of the losses recorded in the previous session when it hit its lowest in almost a decade under pressure from an escalating US-China trade dispute.

Corn was also firm while wheat rose after dropping to its lowest since late April on Tuesday.

“Grain markets are catching their breath after the extreme volatility during the last two trading sessions,” Allendale brokerage firm said in a note.

Soybeans came under pressure after US President Donald Trump threatened to impose a 10 percent tariff on another $200 billion of Chinese goods. China’s commerce ministry described the threat as “blackmailing” and said Beijing would fight back.

Trump’s threat followed the announcement by his administration of tariffs on $50 billion of Chinese goods last week, which triggered retaliatory tariffs by Beijing on a slate of US products, including soybeans and corn.

“Most of the negative news has been priced in the soybean market and we see a limited downside risk from the current levels,” said an India-based commodities analyst.

“Brazilian soybean prices are trading at a more-than-15-percent premium to the US market which will shift non-Chinese soybean demand to the United States.”

The United States exported $12.4 billion worth of soybeans to China last year, the single most valuable US agricultural export product to its Asian rival.

Benign weather across the US Midwest put more pressure on prices.

The US Department of Agriculture late on Monday rated 78 percent of the US corn crop in good-to-excellent condition, up 1 percentage point from a week earlier, topping trade expectations.

The USDA rated 73 percent of the soybean crop as good-to-excellent, down from 74 percent the previous week, but still unusually high.

CBOT wheat faced seasonal harvest pressure, with the USDA reporting the winter wheat harvest as 27 percent complete, ahead of the five-year average of 19 percent.

But dry weather in major wheat producing regions brought support to investors nervous about supplies for the coming season.

“We see no justification for the slide in the wheat price: for one thing, the trade conflict plays no significant role here, and for another, crop shortfalls are still looming in the EU, Russia and Australia,” Commerzbank said.